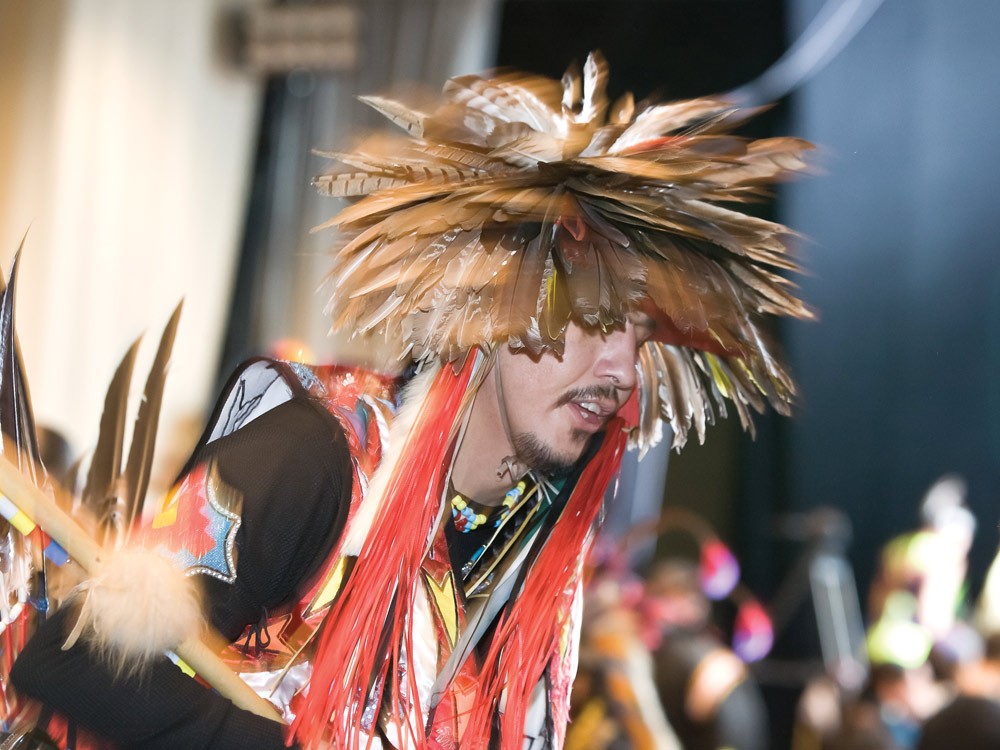 Bells on leather straps around ankles. Metal trinkets hung from dresses and pant legs. On one man’s outfit, bullet shells in place of bells. The metallic melodies heat up — clink clink clink — as the dancers’ feet begin to step and stomp.

It’s the 20th Annual Friendship Dance at Northern Quest Casino. The area tribes — Spokane, Coeur d’Alene, Kalispell and Colville Confederated — gather at the Pend Oreille Pavilion to share their dances and songs. Drummer and emcee Gabby Corral tells the hundreds gathered that the dance is about “the interpretation of these songs, how they originated, where they came from.”

For Joe Nomee, it’s a way to keep a link with his family.

“It’s songs that my dad sang,” says Nomee, 59. He and his 10 siblings absorbed them growing up on the Coeur d’Alene reservation, playing them every Thanksgiving and Christmas. Nomee, who is actually an enrolled member of the Flathead tribe, performs today with the Whitehorse drum group.

Whitehorse hasn’t practiced. “It’s just in here,” Nomee says, tapping his chest. “When they ask for a song, it just comes out.”

Like the other drum groups here today, Whitehorse employs a drum that rises well off the ground and has the circumference of a wagon wheel. The drum groups, lined up on the floor in front of the stage, each have about a half-dozen chairs clustered around their instrument. Before them, a large swath of carpet is open for the dancers. They wear traditional garb, in yellows, emeralds and royal blues. The bells on their ankles serve as both intro and epilogue to the dancing. As songs are called, dancers step lightly, sometimes hopping. Twice on each foot, back and forth. Or once, foot-to-foot as their bodies sway side-to-side.

There’s the Snake Dance, performed when warriors returned home from battle to regale the tribe with their stories. The Friendship Song, which feels like a shuffle. Dancers choose partners for this one; afterward, they tell their partners why they wanted to honor them. Everyone steps side-to-side in a wide circle for the Happy Dance, then rushes inward to cheer. Men take the floor for the Prairie Chicken Dance. Emcee Francis Cullooyah warns the women not to get too excited by “some of these old roosters that you see on the floor.”

Then there’s “Hangman’s Song.” When U.S. troops invaded the region in 1858, they took as prisoners six Palouse Indians. One of those Indians sang this song while soldiers lynched him.

The crowd stands in remembrance. Cullooyah, who assigns songs to the groups, gives this one to Corral’s group, Iron Spirit. Corral breaks into keening song as the other members tap the drum. More voices blend in. Corral winds up his right arm and hammers a mallet into the drum. Thum. Thum. Thum. Thum.

Outside the pavilion, folks sip drinks, their soles glued in front of slot machines named “Thai Treasures” and “The Good Life.” Some play blackjack. A horse race plays out across a half-dozen TV screens in a bar. But the horses stampede silently, muted out and hidden under a cascade of slot machine blips.

Back in the pavilion, the dances end. Bells come off the ankles. Feet pad quietly back home.