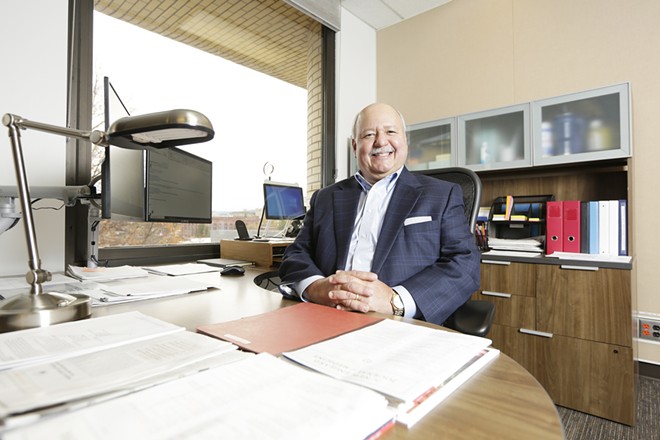 At a time when health departments around the country are seeing exhausted staff quit or retire early, Dr. Francisco Velázquez found himself drawn to stay on as health officer for the Spokane Regional Health District.

Velázquez, 64, was appointed as interim health officer a year ago, just after the firing of his predecessor Dr. Bob Lutz brought the health district under scrutiny.

He joined a district in turmoil, with no background or degree in public health, drawing criticism over his qualifications to lead the district. Between the ongoing COVID-19 pandemic, Lutz's firing and historic underfunding of public health agencies, dozens of leaders at the agency left the past two years, and the relationship between the administration and lower level staff has been strained.

But Velázquez tells the Inlander that when he came on board, he quickly saw a team of hardworking people who needed rest, mentorship and, in some cases, a shoulder to lean on.

"When I joined the agency, I knew a little bit about it – most doctors in the community will tell you the same – but no one knows what all happens here," Velázquez says. "What surprises me every day is how much these teams can do with the size of the teams."

When hiring him permanently in October, the Spokane regional health board set Velázquez's salary at $247,308 per year, plus about $42,000 in other benefits including retirement, health coverage and worker insurance. His predecessor Lutz was making $213,635 as of October 2020, with about $17,800 in other benefits. It's one of the highest-paid public jobs in the region.

While some have questioned his experience, Velázquez notes that in many ways, his decades leading multiple medical companies perfectly prepared him to step in during this time of uncertainty.

"I led teams in distress because of financial issues and other issues in a variety of places," Velázquez says. "Part of my job is to identify what is needed by the team and what can we bring to the table."

Soon after he was appointed, PHACTS, a Spokane group that's criticized issues at the district over the last year, asked the state Department of Health to appoint a qualified health officer instead of Velázquez. But the state replied that Velázquez is provisionally qualified and has all the authority of a health officer.

Velázquez is one of eight new health officers (nearly a third of the total 26 health officer positions statewide, covering 35 jurisdictions) currently going through orientation with the state Department of Health.

The health officers are participating in a handful of two-hour training sessions with state public health experts as they reinforce their knowledge of their authorities and responsibilities under state law, explains course leader Dr. Scott Lindquist, the state epidemiologist for communicable diseases.

About half of the new health officers don't have a master's in public health but bring other relevant experience to the table, says Lindquist, who helped determine that Velázquez's experience qualified him as a provisional health officer.

In fact, while Washington state law requires health officers to have a master's in public health (MPH) or the equivalent, Lindquist, who has an MPH from Harvard, says much of his learning happened on the job. He worked as the administrator and health officer in Kitsap County for 15 years.

"Everyone was like 'Ah! Superstar!' but you know what, I didn't know the first thing about public health," Lindquist says. "It really is one of those positions you learn on the job."

For example, Lindquist says he didn't learn about septic systems or permitting in school. Nor did he learn how to massage the politics of a discussion about adding fluoride to the water, or how to manage a staff that included nurses who'd been doing their jobs longer than he'd been alive.

Velázquez previously worked for several years as president and CEO of Pathology Associates Medical Laboratories (until PAML was acquired by LabCorps), and before that he was managing director at the Quest Diagnostics Nichols Institute in California.

His résumé lists board and advisory board positions with several biomedical companies, and he earned a master's in health care management and policy from Harvard's school of public health. He also worked in several other pathology and medical laboratory jobs.

Now, at Spokane Regional Health District, Velázquez says he hopes to continue learning from the experts on each Spokane team as he continues his education with the state.

"Every day is a learning adventure, I'm always listening to what the team says," Velázquez says. "I do a fair amount of reading. At my desk I have piles everywhere. I've been a constant learner ... I'm constantly reading about what's happening not only here, but around the world."

GOALS FOR THE DISTRICT

One major reason Velázquez says he decided to stay on at the district is because of the public health needs in the community that still need to be addressed, including adequate access to health care.


The community will see an influx of mental and behavioral health needs in coming years due to the pandemic, he says. The district can be a referral point for those issues, helping identify people who need help, and connecting them with community resources.

"One of the things we do very well is connect, convene and bring others to the table who can provide the skill set we can't," Velázquez says.

For example, the district has repeatedly worked with providers to deliver COVID-19 vaccines. The district isn't providing the shots in most cases, but instead helps coordinate a clinic where someone else gives them out.

Having worked with so many others in Spokane's health industry, Velázquez says he feels confident he'll be able to build bridges where needed to better the community's overall health.

Other areas the district will continue to focus on, he says, include communicable diseases (syphilis has become a particularly growing concern), domestic violence, behavioral health, food insecurity and more.

"I do want to tackle some of the areas where we do have work to do moving forward," he says.

Velázquez says he hopes to see the district become an "employer of choice" in the region, and part of that work will include mentoring the talents of employees who are already there.


"I am very excited when I see our team and see some more junior people that have an amazing amount of potential," Velázquez says. "I want that growth to be here for the most part, but I also know there are folks who need at some point to look at other opportunities that are much bigger and that's OK."

Part of improving the district's image could also include making better connections with regional universities and community colleges.

From offering internships and job shadowing to bringing local health district experts to speak to classes, Velázquez sees potential to give students broad exposure to public health and let them know the agency is an option for their career path.

Towers, who did not speak on behalf of Gonzaga, says it's great to hear that Velázquez has an interest in making connections where his predecessor had already started laying some groundwork. She says she hopes the district will lean on the area's public health professionals for advice.

"It's nice when leaders admit what they don't know and go out and build a team to try and provide a comprehensive approach," Towers says. "I hope that the health district is able to forge the types of relationships they had before under Dr. Lutz, because that was a very effective leadership structure."

Velázquez participates in hour-plus phone calls with all the health officers around the state each Friday. Those calls, which have happened weekly for about two years, are a great place for peer-to-peer questions and advice from more seasoned health officials who may have experience dealing with outbreaks or other public health issues, Lindquist says.

"I keep trying to convince everyone, 'Let's go every other week,' and they're like, 'No, this is important,'" Lindquist says. "It's our touch point where we all get to get together and share our experience."

Over the last year, Velázquez says he's helped convene groups of providers, educators, business leaders and community members to talk about the importance of what the health district does.

"When you have those conversations, you can build those relationships that help you build more effectively for the community," he says. ♦