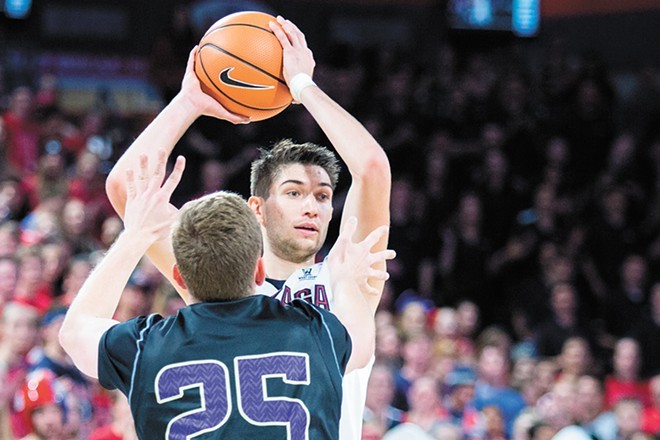 Pepperdine found itself in perhaps the most unenviable position in college basketball: having to face Gonzaga in the WCC Tournament semifinals.

Gonzaga has played in the semifinals for 22 consecutive seasons. Now, after Monday’s win, the Zags are heading to the final for the 22nd consecutive season. That’s a streak older than almost everyone on Pepperdine’s roster and a handful of players on Gonzaga’s as well. It’s safe to assume nobody who played on Monday night can honestly remember a time when Gonzaga didn’t play for the WCC Tournament title.

“It’s been a fun run and wild,” head coach Mark Few said. “22 times in the conference championship straight is just nuts. It just shows resilience and toughness and inner drive by all the players that have been through this program, you know to win and advance.”

One of the players who showed that resilience this season is junior forward Killian Tillie.

Gonzaga has been ranked No. 1 in the AP Poll for two different stretches this season, back in November after defeating Duke and again for the past few weeks. Until last night, Tillie hadn’t been able to suit up and play while ranked No. 1. A stress fracture in his ankle kept him sidelined for the first two months of the season and then a plantar fascia injury caused him to miss seven straight games before the trip to Vegas.

On Monday, Tillie returned to game action and showed no signs of rust. He scored nine points and grabbed six rebounds in 15 minutes of play. Tillie hasn’t been able to get fully up to speed yet this season, but he looked exactly like the player Gonzaga fans saw dominate in 2018.

Last season, Tillie was named Most Outstanding Player in the WCC Tournament after a 13-of-14 performance from three point range. Last night, he picked up right where he left off.

“You know he went 3-for-3 from three,” forward Brandon Clarke said. “I feel he’s still getting back to the game sorta so I feel like he will be a really big piece for us heading to the NCAA Tournament.”

Gonzaga’s 100-74 victory over Pepperdine on Monday was another step towards the NCAA Tournament. Next up is a date with Saint Mary’s in the WCC Tournament Final. The Zags and Gaels have met in eight of the past 11 tournament finals.

Saint Mary’s is 21-11 this season and the No. 2 seed in Vegas. The Gaels are in their usual position on the NCAA Tournament bubble. Most bracketologists have the Gaels on the outside looking in right now, but just barely. Last night’s 69-62 win over San Diego likely wasn’t enough to push the Gaels safely into the tournament field. So, if they don’t want to be sweating on Selection Sunday, the Gaels need to beat Gonzaga tonight.

That’s a tough ask for any team in the country but especially Saint Mary’s. The Gaels are the Zags’ arch-rival, but this year the gulf between the two teams is as wide as it’s ever been. Gonzaga beat Saint Mary’s 69-55 on the road and blew the Gaels out by 48 points before that in Spokane.

The Zags will be the heavy favorites to win the WCC Tournament, for a seventh consecutive season, when they take on the Gaels. But the Gaels are seeking revenge, and are more motivated than ever with a potential NCAA berth hanging in the balance. Plus, they’re the only team that has managed to defeat Gonzaga in this game since the tournament moved to Las Vegas in 2009.

If there’s a WCC team capable of beating Gonzaga, it’s the Gaels. That said, there might not be a team in any conference that could pull that off according to sophomore guard Zach Norvell Jr.

“Not really,” Norvell said when asked if he thought there was a team capable of beating the Zags when the Zags play to their potential. “Not at all, actually.”

Yes, you need a grinder