Neither the Spokane mayor nor the council president is up for election this year, but their visions for the city are 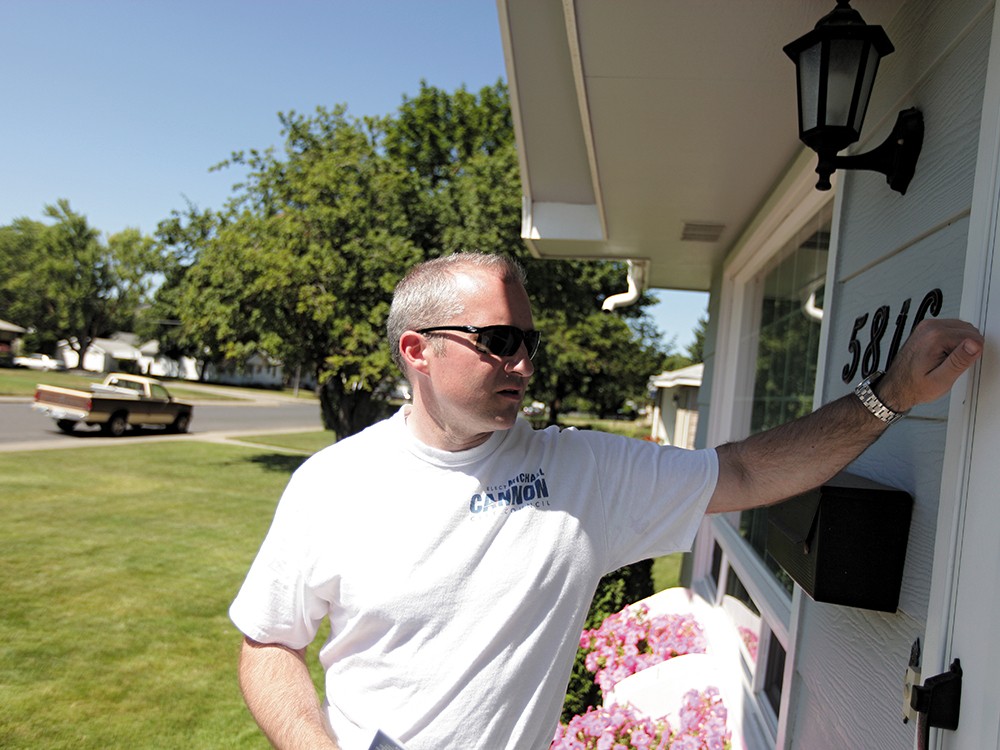 Young Kwak
Michael Cannon is campaigning for a seat on Spokane City Council with the support of the mayor and city administrator.

In a cramped press conference this spring, Mayor David Condon used an anecdote from a community meeting to sum up his budgeting philosophy. As he told it to reporters: A few weeks back, Condon asked the meeting attendees if they thought Spokane needed more cops.

Then, he asked, did they think the city “is [the] most efficient it possibly can be today?” Fewer hands went up. And should the city raise taxes to pay for those new cops? Even fewer hands.

When Michael Cannon, a 35-year-old manager at a Bank of America subsidiary who’s running for City Council, sums up his vision for the city, he uses the exact same story.

“All we’ve heard to date is ‘We need more money,’” Cannon says. “I want to make sure what we have is being used effectively.”

In a nonpartisan council primary race, Cannon falls clearly on the mayor’s side of a proxy battle between Condon and liberal Council President Ben Stuckart. At stake: the future balance of the council.

Cannon, who served on Condon’s transition team and now chairs the city’s Housing and Human Services Board, is backed by the mayor and City Administrator Theresa Sanders. The 3rd District seat up for grabs, being vacated by Nancy McLaughlin because of term limits, represents northwest Spokane from the river north and west of Division.

Cannon says the current council isn’t focusing enough on getting “good value for taxpayer dollars.” He points to “complete streets,” a strategy some council members have supported to improve sidewalks and landscaping alongside roads themselves. Cannon says it’s spending on “unnecessary amenities” at a time when dollars are tight. And it’s that view, he says, that separates him from his best-funded opponent, Candace Mumm.

“At the end of the day,” he says, “she likes to spend money. She’s a liberal Democrat. What’s at stake is fiscal restraint.”

Mumm, 52, is his antithesis. She worked for Democrat Rich Cowan on his campaign against Rep. Cathy McMorris Rodgers and for Mary Verner in her re-election bid against Condon. Mumm is backed by Stuckart, local labor unions and prominent regional Democrats.

When it comes to paying for cops, she likens the city’s situation to a family looking to “clip coupons.”

“But we can’t clip coupons anymore to pay for police and fire,” she says. “It doesn’t mean we’re not going to find efficiencies, but we also have a responsibility to the citizens to put all the options out there.”

She says she’ll look to the Spokane Regional Criminal Justice Commission, tasked with analyzing the local criminal justice system, for money-saving recommendations. She’s open to a levy. When asked for specifics, she says she’s waiting to see revenue forecasts in the mayor’s budget, expected Aug. 1. (The administration has warned council members to expect a budget shortfall, but is so far avoiding specifics.)

Two other candidates in the race have fewer high-profile supporters and less cash on hand, but say they’re better for the job for precisely those reasons: They don’t owe anyone anything.

“Don’t expect to come to the taxpayers and small business folks asking them to pay 100 percent,” Cruz says. “City Hall has got to share a little bit of the pain with the rest of us.”

He’s critical of a $16 million pedestrian bridge planned for the University District. While funding for the project would come in part from state and federal sources, Cruz says future maintenance costs could come at the expense of public safety.

Curt Fackler, 57, former chair of the Spokane County Republican Party, agrees public safety is a top priority, but focuses his talking points on statewide issues. He pushes for more transparency in government, like public negotiations between the city and the police guild, and says changes to state sales tax laws could bring new income to the city. He proposes a two-tiered pay scale for cops and firefighters to pay new hires less in order to save money.

“We made these agreements when the economy was good,” he says of current contracts. “We’re in a different world now.”

The other council primary could also tip the scales. Jon Snyder, 44, is a pedestrian, bike and public transportation-focused first-term council member representing the South Hill and downtown, and he has drawn two challengers for his seat. Another in the block of three liberal council members, Snyder says decisions about how Spokane is developed in the future will soon come before the council, and his focus on smart, mixed-use development makes him the best candidate.

Public safety is a major concern, but Snyder says it’s naive to think more officers can be paid with existing city funds.

Snyder sits on council committees, including finance and public safety, and has been outspoken about national issues, which some have challenged as a poor use of council time. In 2011, Snyder sponsored a resolution urging national legislators not to cut community development funds. Last year, he introduced a resolution in support of same-sex marriage and campaigned for Referendum 74.

“As long as an issue has serious impacts on folks who are in the city of Spokane, I’m going to fight for it,” he says. “I’m going to speak out. … What we have among some folks is an aversion to having to take a stand.”

Snyder’s best known opponent, 78-year-old John Ahern, has raised less than half of Snyder’s $33,000, but has a decade of work as a staunch Republican in the state House of Representatives to his name. Hunched over in a dark suit jacket with an American flag pin, Ahern touts his family values and says he believes further privatizing government — as Condon has supported — will save enough money to pay for new police.

Focused on creating a business-friendly environment, Ahern says he would convene a group of business owners to hear their input and decrease taxes and regulations he believes hamper development.

“The last thing in the world I want to do is to impede the developers and stand in their way,” Ahern told a League of Women Voters forum when asked about representing an area of town that’s faced neighborhood-versus-developer standoffs.

Snyder’s other challenger is 60-year-old businesswoman LaVerne Biel, who says she also hears about streets and public safety when she’s out knocking on doors. She says she’s open to another street bond, but thinks there are savings to find in police overtime spending. She says by rescheduling officers to the busiest times of the day, the department can keep people safer and use savings to hire more officers. Biel also wants to see some city and state codes relaxed for better “customer service” for businesses.

Biel has little political experience other than a stint as chair of the East Central Business Association and sounds frazzled when pressed for specifics.

“I’m not looking at a side,” she says. “I’m starting at the middle, trying to figure out how to best serve our citizens.”