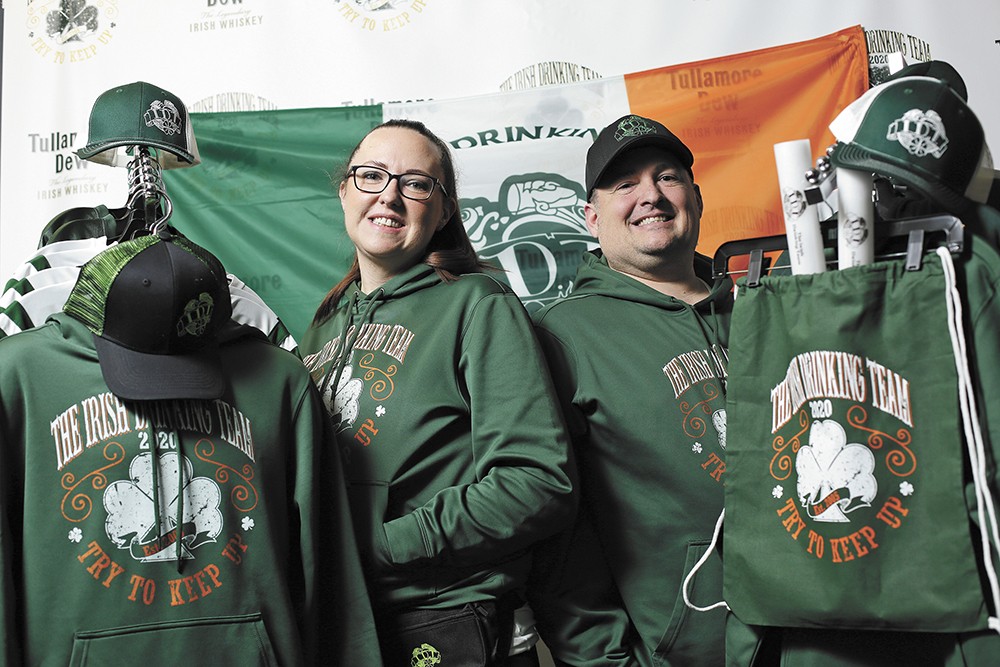 St. Patrick's Day is one of those holidays known primarily for its boozy celebrants, much like New Year's Eve, Thanksgiving, Super Bowl Sunday and sometimes Groundhog Day, depending on who you're hanging out with.

Ostensibly a celebration of the patron saint of Ireland, St. Patrick's Day has evolved into a great excuse to throw parades, wear green, eat corned beef and ruin perfectly good beer with green dye. Whether you're Irish or not, St. Patrick inspires a party.

Enter the Irish Drinking Team, a Spokane crew that's been organizing downtown pub crawls on the mornings of the annual St. Patrick's Day Parade since the mid-aughts. Inspired by a family who ordered matching St. Patrick's Day T-shirts at his dad's print shop, Greg Brunette and some buddies hatched the idea for the Irish Drinking Team over drinks (naturally) at the old Double Dribble bar.

The first year, Brunette says, "it was like 30 or 40 people" banging around downtown. "But then, of course, people saw it and they go, 'Well, what's this about?' So it just started growing."

Each year, they come up with a new design and print it up on a slew of products, and customers "join" the Irish Drinking Team when they buy a T-shirt, hoodie or jersey. Wearing the gear the morning of the pub crawl gets team members into the bars without paying cover charges, and gets them deals on drinks and food along the way.

More importantly, at this point people have turned it into an annual gathering for friends and family, Dickenson says. There are people who don't join the crawl until after the parade (and after dropping off their kids), and most attendees are folks between 30 and 50 who don't get out a lot. The St. Paddy's pub crawl is a way for them to reconnect with downtown's bar scene — and each other.

While most of those folks are part of the Spokane crawl — "I would say about 700," Dickenson says — there are also chapters in Nashville and Kelowna, British Columbia, and the duo has plans to take the IDT nationwide next year, helping locals in far-flung cities set up their own chapters — and hopefully selling a lot more gear in the process.

Young Kwak photo
The IDT at nYne a couple years ago. What will you be doing at 7 am Saturday?

Before then, though, they have the 15th Spokane Irish Drinking Team crawl to navigate. Remarkably, the events have been largely drama-free through the years — don't believe the "fighting Irish" stereotypes, people — and each St. Paddy's Day the group collects money for a good cause, often team members who have health issues or hit hard times. Participants often start insanely early, and the bars involved open to accommodate the morning cocktailers.

"People actually start lining up for when the doors open at 7 [am]," Dickenson says of the first stop at nYne Bar & Bistro, which serves up breakfast while the team sings and starts dancing their way to several other spots. "The earliest people last year, it was like 4:55 am."

We asked Brunette and Dickenson for advice on surviving a long day of revelry. Here are their tips:

1. Drink water between every drink
This is good advice every day, not just on St. Patrick's Day.

2. Just because you're offered shots, that doesn't mean you have to drink the shots
Brunette knows this one intimately. When you're the man in charge of a 700-strong pub crawl, and a DJ, people want to buy you shots. A lot of shots.

3. Eat your breakfast, and get more food through the day
If you can't make it in time for the kick-off breakfast at nYne, be sure to pad your tummy with something before you get started, and eat through the day if you make it until evening.

4. Be polite to your bartenders (and tip!)
Again, good advice every day, not just on St. Patrick's Day.

5. Plan your ride in and out of downtown before Saturday
Spokane's Uber and Lyft drivers are probably going to be pretty busy, so book early.

6. Get a hotel if you can
The best way to be sure you're at the start of the crawl — and not far from a bed when you're done.

FIVE ALBUMS TO GET YOU IN THE IRISH MOOD

The original print version of this article was headlined "Marathon Training"