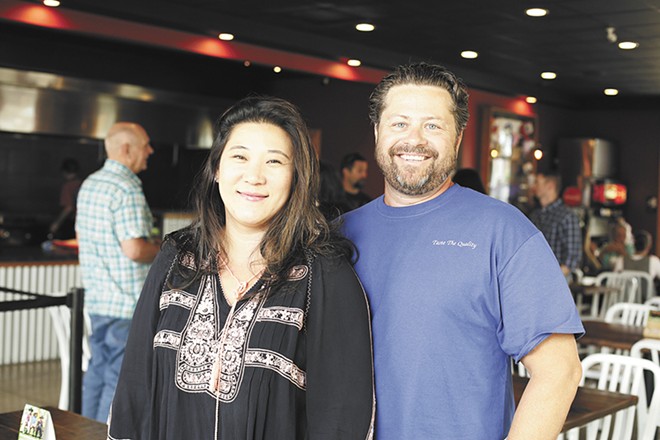 They’re sticking with only takeout for now, but it’s good news for downtown Coeur d’Alene that Shiki Sushi is still around, having opened at 221 E. Sherman Ave. in early winter’s slow spell, followed by Idaho’s stay-home order. Too bad you can’t see inside yet, actually, since it’s a pretty darn cool space with wall murals, subdued lighting, very cozy yet well-partitioned tables, and a huge room downstairs for larger parties or events.

The menu is extensive, with appetizers like tuna tartare with quail egg ($11), shumai steamed dumplings ($5) and coconut shrimp ($8). In addition to the usual seaweed salad ($5) try the salmon skin salad with crabmeat and eel sauce ($6). Go for larger entrées like Japanese yakisoba ($11-$16), pad thai ($13) or teriyaki ($11-$18), or mix-and-match from soups, fried rice, tempura, katsu or any number of chef’s rolls. The weekday-only lunch option is a welcome surprise: Have two sushi rolls for $11, or three for $24; the bento box with soup, salad, gyoza, California roll, and a small entrée ($10-$14), or the hibachi lunch special ($10-$15). The Coeur d’Alene location is the fourth for owner Leon Chi, who also has places in Walla Walla, Kennewick and Hermiston, Oregon. Check the restaurant’s Facebook page for more information about upcoming dine-in availability.

You wouldn’t really call Roger’s a dine-in eatery; like most old-fashioned drive-up places, order at the counter and eat en route to somewhere else or maybe at an outdoor picnic table. Minus the availability of picnic tables, Roger’s didn’t need to change much during Idaho’s COVID-19 hiatus, but there are changes afoot. Roger’s Neider Avenue location closed in April, allowing owners Nicole and Mark Randolph to focus on a new location on Government Way between Ironwood and Appleway, scheduled to open mid-summer. That will bring the total of Roger’s locations back up to four: the original downtown Coeur d’Alene spot as well as Post Falls and Hayden, both of which recently added beer, hard cider and seltzer.

When it opened in Spokane Valley right before the region’s restaurant industry ground to a halt, Kokoro Ramen was the third branch of Leo Zheng and his family’s growing local enterprise. In addition to Poke Express and Boba Tea Time, which has several Spokane locations, Zheng is now serving “traditional Japanese ramen style adapted to the American palate,” he says.


The menu is modest, with a handful of ramen styles: miso, black garlic, tonkotsu, tonkotsu shoyu and vegetable. All bowls ($10-$12) except the vegetable ramen start with slow-cooked pork bone broth, which adds a creaminess to the stock, and include toppings like soft boiled egg, sweet corn, green onion, ginger, bamboo, wood ear mushroom and seaweed. Add extra toppings or order it spicy for a small upcharge. Five rice dishes are available, including unagi (eel) rice ($13), as well as assorted appetizers. In addition to more common gyoza ($6) and edamame ($4), try the Kokoro steamed bun with chashu or braised pork belly. Just in time for summer, the new spot is also serving mochi ice cream ($3) and assorted boba teas and smoothies with those fun little tapioca bubbles that burst when you bite ($5). Kokoro, which means heart, mind and soul, according to Zheng, is the first ramen house in Spokane Valley.