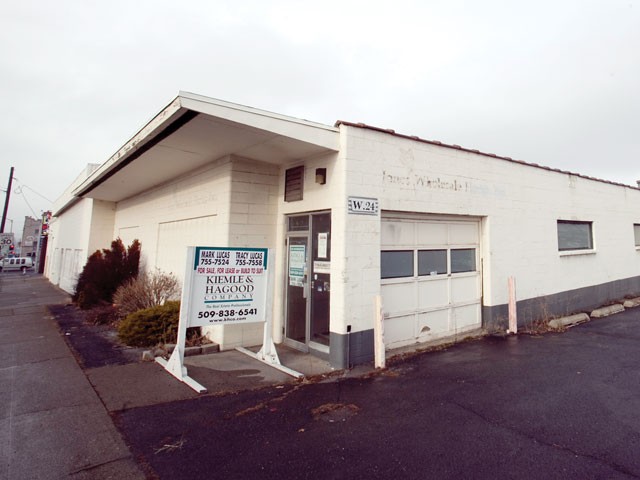 Right now, it’s not a pretty site. The block — surrounded by Pacific, Second, Browne and State streets, a dividing line between downtown and the University District — would be generously described as hardscrabble. Marked by chain link, graffiti and plywood, the block communicates two things: very old, and very vacant.

White paint scrawled on one wall reads: “NO TRUSTPASSING.” Across from the nearby House of Charity, two men with dingy clothes, beards and cigarettes linger.

But Chris Batten of RenCorp Realty sees a different vision in his crystal ball: a revitalized block, a thriving business district and, possibly, a home for the long-nomadic Spokane Public Market.

When The Inlander spoke to Batten earlier this year, RenCorp Realty — once the driving force behind the revitalization of the Otis and New Madison buildings — was struggling and later ceased operations entirely.

But now Batten has partnered with several others to form the BR3 Development Group, intending to transform the dilapidated block into “Pacifi c Bridge,” a link between the downtown core and the University District.

Last week, the Journal of Business reported that BR3 Development was spending $1.4 million to purchase the north half of the block, with an option to buy the south half.

Meanwhile, the Spokane Public Market group has been looking for a permanent spot since 2007, when they bought the nonprofit status of the old Market Place public market. They considered using the old YMCA building. But that building had too many indoor levels — an open public market would take too much renovation. They considered using the north bank property near Riverfront Park, but that would have required constructing a building from the ground up — too much time. They considered the Jensen-Byrd building, in the University District, but Washington State University had other plans for it.

So when Batten approached the Spokane Public Market about making the old Roses and More building a permanent home, they jumped at the possibility.

“What we envision is a public square, a place where people gather and meet their friends and socialize and pick up some produce and bread and pies,” Stoltz says. “And even a glass of wine.”

Contractors will knock out the windows of the warehouse, raise the roof and make it look attractive. Local vendors would be able to sell goods, food and trinkets directly to Spokane customers. From there the possibilities multiply: Stoltz and Batten talk about a “test kitchen,” a place where vendors can, say, legally turn their tomatoes into tomato paste.

The deal hasn’t been fi nalized yet — each party’s still doing due diligence — but, publicly, they’re optimistic.

Yet, both Stoltz and Batten admit there are challenges contained within the location.

“You can’t have a vacant block across the street from the House of Charity,” Batten says. “That’s why you have fires, frankly.” This September, one of the apartment buildings that BR3 bought on the block caught on fire.

But just by developing the block, he says, that problem begins to disappear. “You put bodies on the ground, increase density, get eyes and ears,” Batten says.

“Getting a couple hundred bodies in that block changes that dynamic.”

The Spokane Public Market, in particular, has another complication: other local markets. It’s only a few blocks north of the soon-to-open Main Market Co-op grocery store. And, like dueling gas stations, the Spokane Public Market would operate literally across the street from the Spokane Farmers Market from May to October. All are places for local farmers to sell their produce.

“I would hate to see those individuals stretched too thin … and having to do too much work to sell their goods,” Hall says.

But Stoltz is confident that the new Public Market — if it happens — will create a sort of “market district” that benefits everybody.

“There is strength in synergy,” Stoltz says. “It’s like when you have a mall. You have a Macy’s on one end, but you want a Nordstrom on the other end. I think it will strengthen both of us.”