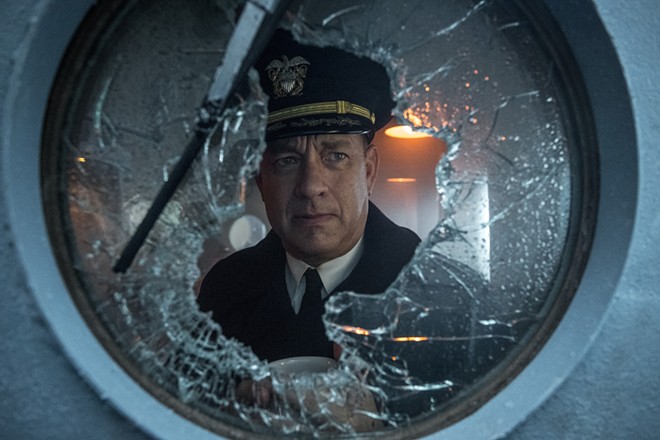 Greyhound tells a small-scale story against the backdrop of a monumental historical event, taking place over the span of just a few days on a single warship. It's set in the midst of the Battle of the Atlantic, a yearslong skirmish between Allied and German naval convoys in the leadup to WWII, in a part of the ocean known ominously as the Black Pit.

Tom Hanks stars as Ernest Krause, a Navy commander overseeing a convoy of ships transporting supplies and passengers across the ocean, which is blindsided by an attack from Nazi submarines. Krause looks on helplessly as one ship after another is picked off, and he methodically strategizes as more and more enemy ships enter the fray.

It's a pretty simplistic premise, focused on the tactics of the mission and little else. The script, which Hanks wrote himself, consists almost exclusively of strategy and logistics, and of stern men in uniform yelling things like "Hold course!" and "Brace for impact!" and "Ease the rudder!" Krause's crew are mostly nameless grunts, and even he remains an enigma: We know he's devoutly religious and has a girlfriend (played thanklessly by Elisabeth Shue) waiting at home, but that's about it.

Greyhound is a weirdly truncated film, too: Right as the movie seems to be ramping up, it abruptly ends (the credits start rolling around the 80-minute mark). But as far as its filmmaking is concerned, it's as sturdy and waterproof as the ships themselves, and your uncle who's obsessed with WWII-era submarines will probably dig it nonetheless. ♦

The original print version of this article was headlined "Streaming Stars"