Too Late for Two-Way?

Advocates for a two-way Main hold out hope, but city remains stuck on one-way course 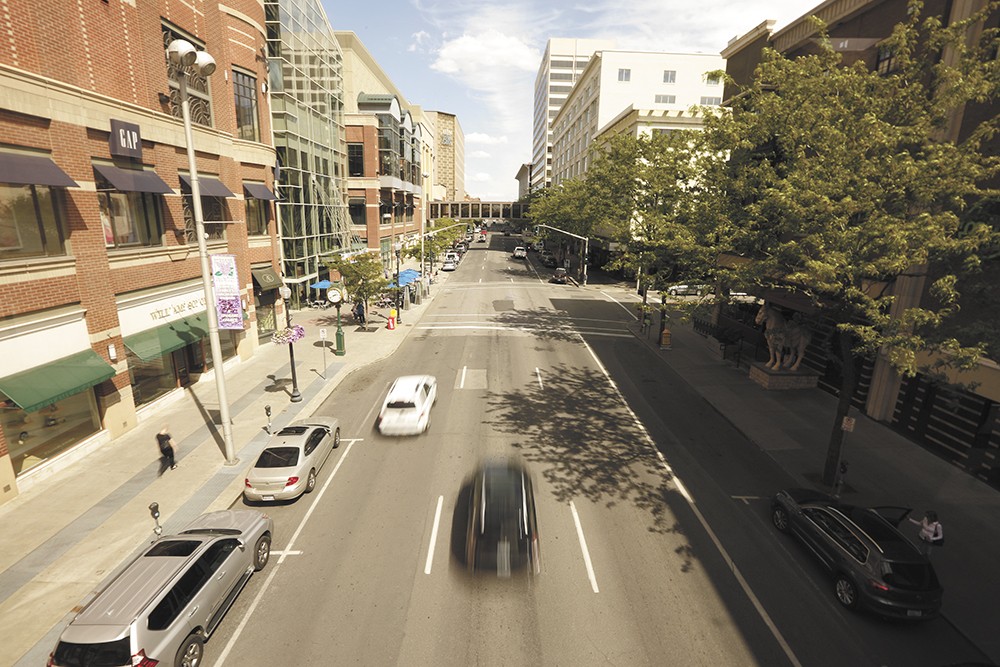 Young Kwak
The Cowles Company, which owns the Spokesman-Review and River Park Square, has remained a staunch skeptic of turning Main Street into a two-way street.

or a defeat at the ballot box. Instead, they sometimes quietly wither away unattended, like a plant someone keeps forgetting to water. Earlier this year, however, it looked like the city was going to resurrect one of those proposals that had been left to wither.

In March, the council unanimously voted to allocate $15,000 for a study of Main Avenue, with Kendall Yards developer Jim Frank chipping in for an additional $15,000. This, Council President Ben Stuckart suggested, could be a way to visualize what changing Main Avenue to a two-way street could mean for downtown.

"If we talk to urban planners around the country, retail areas actually work better with two-way streets, not one-ways. One-way streets are designed to take people as fast as possible from point A to point B," Stuckart said. "When your main retail street is a one-way street, you are inviting people to speed through your downtown and not stop and shop."

Stuckart lamented that he's "seen for the last four years a lack of impetus and momentum" on transforming Main Avenue back to a two-way street. The study was an opportunity to change that.

But by the time that Stuckart walked out of the meeting with the Main Avenue study stakeholder group on Friday, the question of a two-way conversion had effectively been removed from the group's agenda.

Theoretically, the votes are there. A majority of councilmembers love the idea of switching Main to two-way, and the rest — including conservative councilmember Mike Fagan — are interested in considering it. And yet, with major downtown businesses skeptical, the proposal to change Main to a two-way street has withered in recent years more than it's grown.

Three years ago, it looked like the conversation about converting Main back to a two-way street was finally moving forward.

"For our main commercial boulevard to be a one-way is almost unheard of," Stuckart said back then. It wasn't just a matter of business owners frustrated by cars speeding past their businesses on a road too wide for traffic patterns. It was a frustration for tourists trying to navigate through the grid of one-way streets.

Stuckart was lobbying the legislature for funding. The Downtown Spokane Partnership promised they'd survey their members about the idea. With all the examples of smashing success of two-way conversions nationwide, advocates hoped they'd be able to persuade any holdouts.

"I'm going back to talk to most of [the skeptics] to show them real data that suggests that their concerns may not be warranted," Scott Chesney, then the city's planning director, told the Inlander in 2013.

But Chesney's efforts were in vain. "He couldn't seem to move it forward," Stuckart says.

In 2014, Chesney said he became frustrated with the apparent lack of support for the idea from his division director, Jan Quintrall.

"We both knew that was going to be an uphill battle," Quintrall told the Inlander in 2014. "What we didn't want to do was create a war with one end of Main with the other."

The section of Main just west of Division — including small businesses like Revival Lighting and Merlyn's comic book shop — have been enthusiastic supporters of the change. But bigger businesses further west weren't on board.

The Cowles Company, which owns the Spokesman-Review and the River Park Square shopping center, was opposed to the idea. So was Dru Hieber, owner of the Parkade parking garage and the Bennett Block. Both, Downtown Spokane Partnership President Mark Richard says, were worried about how such a change to traffic design could impact their parking garages.

With the downtown core thriving, Richard is cautious about messing with a winning formula, especially with discussions over River Park Square's Nordstrom's lease looming.

"We make a mistake, the costs are astronomical," Richard says. "I wouldn't want that on my name if I was in office, let's put it that way."

Quintrall said the city has moved away from the two-way Main discussion as its focus turned to how the street would be affected by developer Walt Worthy's new Grand Hotel. Advocates hoping the hotel would provide a boost to the two-way Main efforts were disappointed. Not only does the Grand currently lack retail spaces facing Main, visitors to the Grand can't even enter from Main Avenue without an access card.

By January of 2015, Chesney had been ousted by Quintrall, Quintrall had resigned, and efforts to change Main had all but been abandoned.

"This was always a casual conversation. There was no public process that ever happened," says Julie Happy, spokeswoman for the city of Spokane's Neighborhood and Business Services division. "There's no funding that's ever been allocated."

It's a heavy lift. The changes to stoplight signaling alone, Happy says, would cost an estimated $3 million. The Washington State Department of Transportation would have to weigh in on the impact of the change to Division Street.

"There are huge amounts of unknowns," Happy says.

A year ago, Stuckart started talking with Greenstone Homes developer Jim Frank about the possibility of pooling resources to fund a study about how to improve Main. Back then, Stuckart says, it looked like it would be a way to scrutinize the one-way/two-way question.

But the group of city and community stakeholders tasked to design the study, including DSP and River Park Square, quickly concluded Friday that they weren't going to be able to agree on whether the change to the direction of Main should be part of the study.

Stuckart — typically hard-charging when he has the upper hand, willing to negotiate when he doesn't — compromised. "We don't want to end up with a study that just sits up on a shelf," he says.

Instead, he said the group is focused on three goals it can agree on: Make Main more pedestrian-friendly, build more residential housing downtown and connect downtown with the University District to the east.

"You walk downtown to the east side of Main, there are whole areas that are a barren wasteland," Stuckart says. But he suggests a lot can be done to fix that — widening sidewalks, adding street trees, creating better lighting — without wading into the two-way debate.

"Maybe you can get to the same endpoint while leaving [Main] one-way for now,' Stuckart says.

"Personally, I think two-way Main would be a real boost for the businesses and the vitality downtown," Waldref says.

Two-way Main advocates hoped the committee would seize on the chance to force the two-way issue — recommending that the Central City Line go down Main in both directions — and get federal grant dollars to help pay for the street's conversion. But Waldref didn't want to risk potentially sabotaging the Central City Line's momentum. In the end, the group settled on a route of Main one way and Riverside on the other.

"We didn't want to end up it being delayed or controversial, because it was tied into the two-way Main conversation," Waldref says.

Among the two-way Main supporters, there's still hope. Though it may not be anything tangible, Merlyn's owner John Waite says he senses that opposition to a two-way Main has softened.

While recent projects to add center parking and bump-outs — little sidewalk peninsulas that jut out into the street, making crossing easier and safer for pedestrians — to Main Avenue were designed for a one-way street, they allow for a reconfiguration if Main shifts to a two-way.

In two years, Waldref says, the plan for downtown Spokane — the one that has recommended converting some east-west streets to two-ways since 1999 — will once again come before the council. Then, perhaps, the two-way Main conversation will once again be resurrected.

"This is our opportunity to nail that down, one way or the other," Waldref says. "I don't think it's over. The conversation is not over." ♦