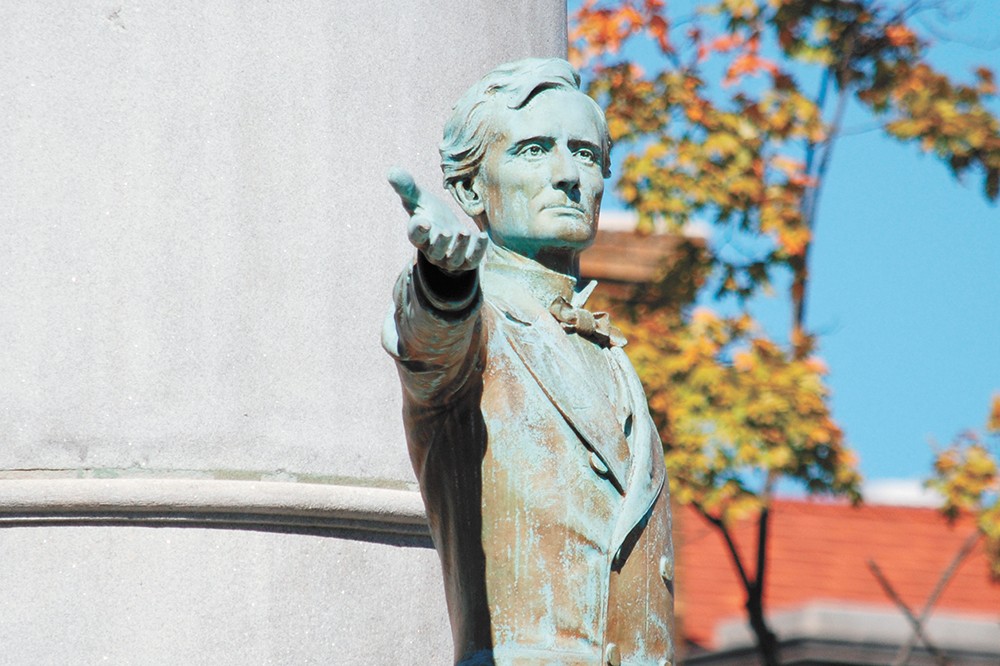 olekinderhook/Creative Commons photo
The statue of Confederate President Jefferson Davis in Richmond, Virginia, before it was removed.

In the searing July heat in New York City, radical militants gathered in a Manhattan park, determined to tear down a statue. Over the past few years, this public monument had become the focus of protests against unpopular government measures, including a shocking act of police brutality in Boston that cost the lives of five civilians. The statue was a frequent target of graffiti. This time, however, it was coming down. With ropes tied around the statue, protesters heaved together, pulling it down. In the frenzy that followed, the crowd decapitated the statue and cut up what remained.

It was July 1776. The protesters were the Sons of Liberty. The statue was of King George III.

This event in New York almost 250 years ago could almost be snatched from today's headlines. Over the past few weeks, a popular wave of Black Lives Matter protests against systemic racism has targeted statues around the globe in response to the killing of George Floyd by the Minneapolis Police Department. From the felling of Confederate President Jefferson Davis in Richmond, Virginia, to a crowd throwing the slave trader Edward Colston into the sea in the English port city of Bristol, protesters have attacked symbols of white supremacy in our commemorative landscape.

Opponents of this iconoclasm argue that the destruction of statues is an act of historical erasure. By removing monuments to Confederate generals and colonialists like Cecil Rhodes, they claim, protesters are tearing down history by ignoring aspects of our past that do not conform to their 21st-century multicultural values. Without statues, the reasoning goes, there is no history.

Not so. Just as we still know who won the American Revolution over 200 years after the Sons of Liberty destroyed the statue of King George, the removal of statues honoring white supremacists will have no effect on our understanding of the past.

Monuments are not history. They may depict historical figures or events, but statues and other monuments use the past to articulate the civic values of the present. Statues demonstrate what it is that we want to celebrate about the past. Statues are about our collective memory; they are not history itself. We can remove statues without erasing the past.

History and memory are two different things. History is the study of change over time. Historians (of which I am one) try to make sense of the past by asking new questions and carefully looking for the answers in primary source material — sources that were produced at the time of the events that we are studying. You find history in archives, libraries and museums, where written and material sources offer a window into the past. History is complicated and often contradictory because human beings are complex creatures. Historians generally do not waste their time looking for heroes or villains because, if we're honest, we can find bits of both inside ourselves. But we are constantly engaged with rewriting the past in light of new research. The past is not dead, which is why it is hard to reduce it to a timeless, metal object, like a statue.

Memory is how we choose to remember the past. Memory is about our present relationship to the past; it is not about the past itself. Statues are a key expression of historical memory and, as with the statue of King George, they are inherently political. Most statues were erected to tell a contrived story about the past that served a distinct purpose in that specific moment. In the case of Confederate statues, they were largely built decades after the Civil War. Figures like Robert E. Lee and Stonewall Jackson dominated public spaces in the South after the end of Reconstruction in 1877 to make it clear to African Americans that the Confederacy may have lost the war, but white supremacy still ruled supreme. These statues were not about educating local citizens about the Civil War. They were about celebrating the supposed racial superiority of white Southerners and intimidating black Southerners. Statues are blunt instruments, which are incapable of expressing the true complexity of the past. They are a sanitized, caricature of history, rather than the real thing.

The civic values that we celebrate as a society change over time. It makes sense, then, that our public statues and monuments should change to reflect these values. This is not an attempt to erase history (I don't want to put myself out of work, after all!), but it does mean reckoning with our collective memory of the past. Do we want to continue to dedicate our civic landscape to celebrating values of treason, white supremacy and genocide? Or do we want to recover the stories of other, forgotten figures from our past, who demonstrate our republic's avowed commitment to democracy and equality?♦

Lawrence B. A. Hatter is an award-winning author and associate professor of early American history at Washington State University. These views are his own and do not reflect those of WSU.