Tossin' bags in the street 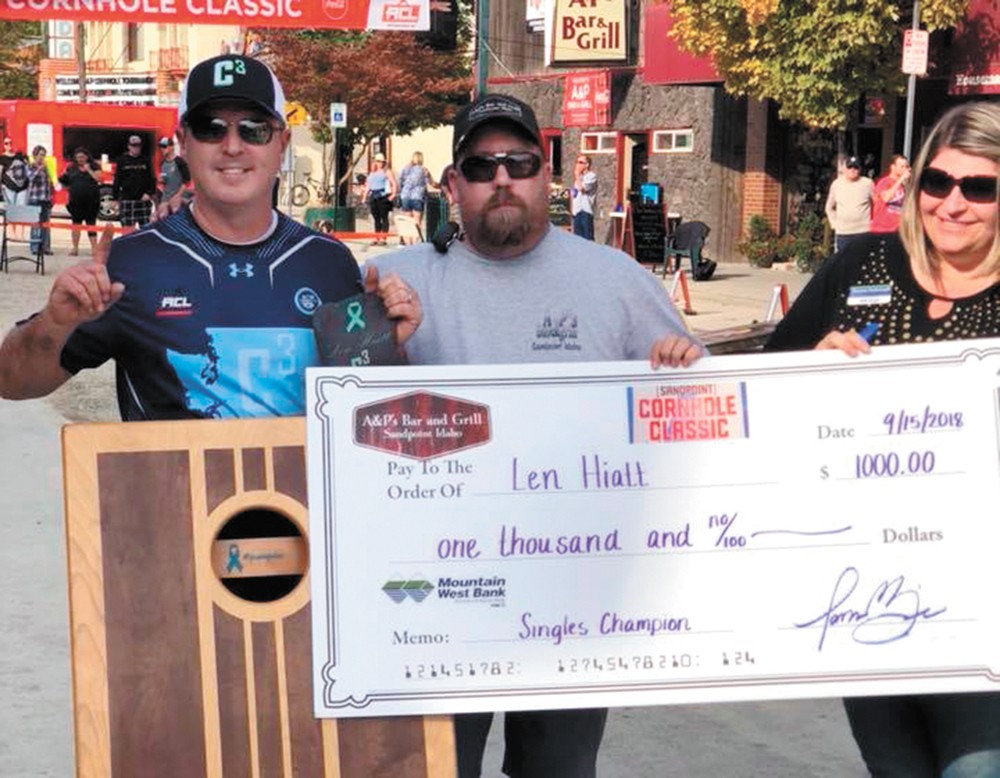 A thin layer of construction dust floats around their ankles. Their feet are still, positioned exactly right. Their movements are steady, measured and precise.

One at a time, these two men swing their arms back, and then forward, sending bean bags rotating through the air toward their target: a hole six inches in diameter — a cornhole, to be exact.

These men — Ryan Huffey and Len Hiatt — have mesmerized more than 200 people gathered for the first-ever Sandpoint Cornhole Classic. They're facing off in the singles championship.

Hiatt and his team of bag-tossin' gents, who call themselves the C3 Baggers, hail from Cowlitz County, where they started a league. The team has traveled throughout the country for tournaments, and Hiatt is on the verge of going pro.

Hiatt stands about 5-foot-10, and he's covered head to toe in C3 gear: a hat, sweats and a jersey that covers a slight paunch. He wears headphones with classical music blasting in his ears while he tosses — to drown out the haters. And there are plenty of them.

Huffey, the local underdog, is taller, thin with a scruffy beard. He's wearing a faded cut-off T-shirt, basketball shorts and white socks crumpled around his ankles.

Watching the two men is basically the cornhole equivalent of Rocky v. Apollo or the Mighty Ducks v. the Hawks — the classic Caddyshack dynamic.

Huffey has already beat Hiatt once today. That means the Westsider has to win two in a row to steal the $1,000 championship prize from Sandpoint's cornhole darling. If Huffey wins, he'll take home a total of $2,000 thanks to a donor who promised to pay an extra thousand bucks if a local wins.

Hiatt pulls out the first game to force a second and deciding finale. Clearly upset with himself, Huffey resets and takes a smoke break.

As Inlander staff writer Wilson Criscione and I watched this whole thing unfold, we confided in each other a wish that neither Hiatt nor Huffey would play in the doubles tournament, which we had entered.

In our first game, we got demolished by Hiatt and his partner. The four points we managed to score, though, were victory enough. ♦