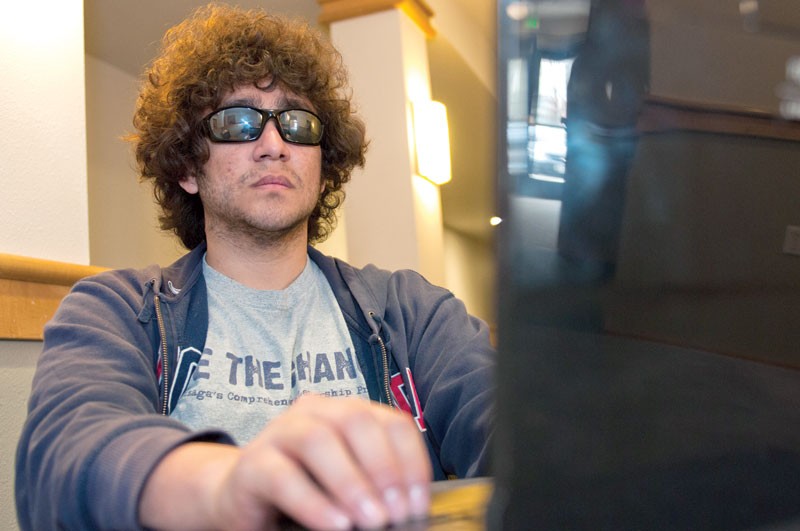 Amy Hunter
Dealing with loss of sight and a new home, Gonzaga student Gabriel Castellanos is giving his memory a workout — "because I can't write stuff down."

When Gabriel Castellanos grabs onto your arm, he doesn’t hold it tightly. He doesn’t even really grip. He takes you around the tricep, gently, with just the thumb and two fingers.

As you walk together, he seems to use the movement of your body, perceived through his fingertips, as a kind of input, to evaluate his own movements. He doesn’t hang on for support, the way you might expect — the way people do in the movies — because, to him, you are not a crutch to be leaned on.

For as long as he holds your arm, you’re an extension of his senses, a data set to be examined.

He is by no means dependent.

In the hive of noontime activity around the COG, a building that houses Gonzaga University’s cafeteria, bookstore and a burger joint called Spike’s, Castellanos tells me to look for “the only guy with a dog.”

We sit at a booth near the window. Gabriel’s Labrador, Oregon, displaying a casual disinterest common to service animals, curls up on the ground at his feet. Gabriel got the dog two years ago, just before graduating from Brophy College Preparatory High School in Phoenix.

Four years before that, Gabriel’s body stopped producing insulin, which meant it could no longer turn sugars into energy. Finding no nutrition in sugar, it began breaking down ever-larger amounts of fat for fuel. The natural byproducts of that process, called ketones, built up in his bloodstream until they began to poison him. Castellanos’ liver reacted to the poison by pumping out more glucose to use as fuel.

Except, of course, his body could no longer use glucose as fuel, and so things got even worse.

Complications from excess ketones can become apparent when glucose hits 300 milligrams per deciliter of blood. Gabriel and his family were on their way back to Arizona from Dallas when the teenager’s liver and kidneys shut down and he slipped into a coma. His glucose was around 1,400.

Doctors kept Gabriel comatose for three weeks, first in El Paso, then back in Phoenix. When he woke up, he couldn’t use the left side of his body. That movement would eventually return.

His eyesight, though, wouldn’t.

When speaking about the way he has navigated the world for the last six years, Castellanos, now 20, uses the vernacular of a scientist, or a programmer. He speaks about spending his first weeks at Gonzaga with an orientation and mobility trainer, walking around campus, “building tactile memory.”

He talks about the way his theoretical knowledge — the location of a building on campus, for example — often doesn’t match up with his practical knowledge, the exact steps and turns to take to get there.

Because computers are cumbersome, and Braille displays are limited, Castellanos keeps most of this information in his brain. He describes the way he orders his thoughts and his sensory data as though it were the file structure of an operating system, folders upon folders of information, getting ever more specific until you find exactly the right file, in exactly the folder it’s supposed to be in.

“I have to keep so much in my mind,” he says, “…this appointment, what I have next Monday, this lady I’m meeting at 1:45 to go to wherever. I’ve had to really work on my memory because I can’t write stuff down.”

Everything else “is just not convenient.”

These inconveniences, partially, have led him to pursue a degree in computer science. He has a four-year internship at Spokane-based Next IT to develop what he calls, “almost like an external notepad,” that you could fill with information — via text message from your phone, because that’s the way the kids want it — for retrieval later. “You’ll be able to text it, ‘What do I have to do on Monday?’” Castellanos says, “and it’ll say, ‘Oh, you have this, this, this and this,’ or whatever.”

It’s not even to the testing phase, but after working on it in earnest for a little under a semester, Castellanos says, “I almost have a beater version of it running.”

Auditory is the way he sees technology going, and that’s good for him. “I was always an auditory learner, which is awesome,” Castellanos says, laughing, “’cause it would suck right now if I was a visual learner.”

Sit down at your computer and close your eyes. Stretch your fingers out. Find the keyboard. The F and the J still have those little nubs that help you find the home row. These things probably won’t last.

Popular technology (smartphones, tablets, etc.) assumes an ever more central place in our lives, even as advances in that technology move it away from the sense that is absolutely central to Castellanos’ interaction with the world: touch.

Google’s Android phones have three or four tactile buttons. The iPhone has one. Everything else is manipulating electrical currents on a smooth surface.

Now put your hands back on the computer. You can feel the keys, sure, but where is the mouse cursor? What’s even on the screen?

The problems blind people have accessing technology — and thus, in a very real way, accessing the world — aren’t future worries. And while most of the above problems have existing solutions, they’re generally ad hoc and piecemeal. Castellanos uses a program called Job Access With Speech to assist with most of his computing and note-taking. He’d use it for more things, except it’s not universally compatible.

In Castellanos’ estimation, tech for blind people is “10 or 20 years behind” tech for people who can see. With few companies working specifically to advance technology for the blind, he worries that chasm will widen, not shrink. But it doesn’t have to be that way.

“There could be a day when you can buy a Google phone and it’s 100 percent, completely accessible to the blind,” he says, “but not unless someone steps up and, like, bridges that gap.”