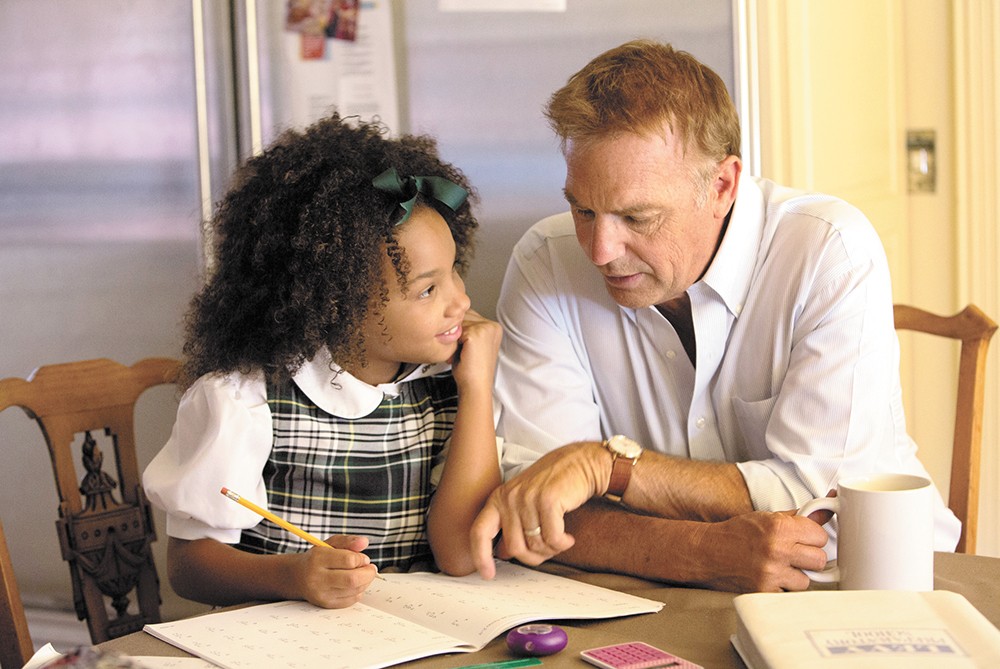 Kevin Costner and Jillian Estell in Black or White.

with no explanation, to Black or White, this second teaming of writer-director Mike Binder and star Kevin Costner (their first was the overlooked 2005 dramady The Upside of Anger) gives us both men wearing their "game on" shoes. It also features a story made timely by the unfortunate overabundance of racially charged headlines these days.

But Black or White has nothing to do with white cops and black victims. It's about racially mixed families, and how words and actions can turn harmony into discord, how misunderstandings can lead to tarnished relationships. Yet the film also shows, through a strong, inventive and tight script, how, as Paul McCartney once wrote, "We can work it out."

It begins on a terribly sad note, with the awful news that hotshot lawyer Elliot Anderson's (Costner) wife has been killed in a car accident. Devastated, he returns to his now much emptier home to face his housekeeper Rosita and cute 7-year-old granddaughter Eloise (Jillian Estell), who's been living with him and his wife since the death of their daughter in childbirth.

A good script — about how grandpa, without grandma to help, will rise to the occasion of dealing with the innocent little girl — could have been fashioned out of just that circumstance. But Binder goes for a lot more than just the pulling of heartstrings. He gives us a boatload of fresh, interesting characters, then spins a constantly evolving story line around them.

Eloise comes from a mixed marriage — Elliot's daughter and Reggie (André Holland), the son of Rowena (Octavia Spencer), a well-to-do black woman who lives across town, and has never exactly gotten along with Elliot.

Let the plot thicken! Rowena, an outspoken and stubborn woman, has decided that after all this time, there's plenty of room for Eloise at her place, and brings up the idea of joint custody. She thinks the girl should have her real daddy back. But that would be Reggie, who split a long time ago to hide under the blanket of a crack haze. Still, she gets her lawyer brother Jeremiah (Anthony Mackie) to take the case.

It's no-nonsense Jeremiah who accuses Elliot of having "a problem with black people," an allegation that's simply not applicable to the affable Elliot, especially when he makes an appearance at Rowena's happily crowded home and is seen to be popular with everyone... except Rowena, who spreads the unwarranted idea that Elliot wants to keep Eloise "away from black people."

Plot not thick enough? OK, Elliot's got a drinking problem, one that he's always trying to hide with little blasts of Binaca in his mouth to cover up the smell of alcohol. Tensions rise, angers flare, a shared hatred between Elliot and Reggie is apparent.

Yet despite what seems like a lot of heavy-handedness, this is a movie about love, and what people will do to protect people who they love. Via the talents of Octavia Spencer and Mpho Koaho (from the TV series Falling Skies) as Eloise's private tutor Duvan, there's also a dose of offbeat humor — she can't control her outrageous outbursts, even when the story eventually moves to a courtroom, and he's just a funny guy. While newcomer Estell keeps the cute little girl business nicely balanced, the film is outstanding mostly because of Costner's excellent performance. His Elliot can be seen as someone who's almost as flawed as the crackhead Reggie, but while Reggie is a full-fledged loser, Elliot is a man with a heart bigger than his personal demons. Even more credit goes to Binder, who fashioned a surprising, gutsy, and ultimately crowd-pleasing ending. ♦

Black or White is not showing in any theaters in the area.