Sometimes the best plans are ones that leave room for serendipity. That's as true of Andrew Parker's artwork as it is his career path.

Parker recalls how a few years ago he was at work on a painting, filling in circles with black pigment, but stepped away briefly. When he resumed painting in the shapes, he discovered that the values of black didn't match because the pigment in his cup had dried ever-so-slightly.

"That was a lesson," Parker says, noting that he realized: "You could fight it or go with it."

He went with it.

Fast forward to a current piece, Midday, a mixed media composition combining drawing, painting, collage and printmaking. Its grid-like background of precise circles is overlaid with areas of color, including a black splash that has dripped in long, vertical arcs. Although it looks spontaneous, Parker actually transferred the splash shape onto the composition from another image, effectively melding two ways of working: structured and serendipitous.

Those two words also apply to Parker's career path. Initially, he pursued being an architect, partially because it sounded like a definitive job.

"And that if it didn't work out, I'd be a wildlife photographer," Parker adds, noting that he spent a lot of time camping, hiking, backpacking and fishing with his parents, who were both park rangers.

Although Parker had an early interest in art, he studied environmental design — similar to architecture but requiring fewer years of study — and photography in college. He spent his off-time from Montana State University in both Yellowstone and Glacier National Parks, and worked summers in far-flung places like a fishing boat in Alaska and on an organic farm in Morocco.

During Parker's senior year, instead of completing credit requirements for a dual major in photography, he chose a paid architectural internship at BCHO Architects and Associates in Seoul, South Korea.

The culture, the climate and the mix of new and historical architecture impacted him profoundly, he says. "Totally different, radically different," Parker recalls.

And because the architecture firm's founder incorporated visual art into his design process, Parker was expected to follow suit. 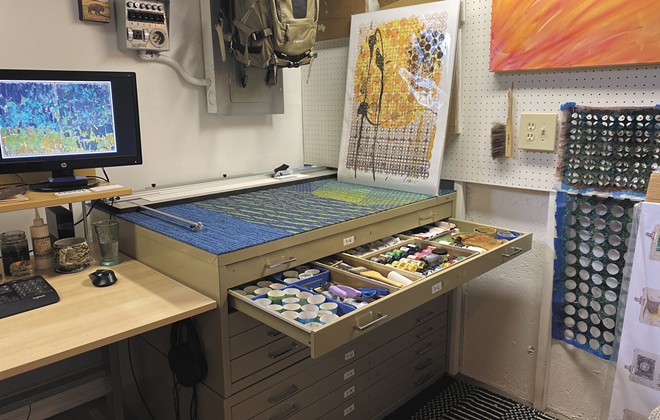 When Parker returned to the United States, he followed his future wife, Kit, to Houston, Texas. There he got a job at the international design firm PGAL and completed his master's in architecture.

When the young family returned to Spokane, where Kit is from, Parker joined NAC Architecture, made art as a creative outlet and got familiar with the local art scene.

While visiting Emerge art gallery in Coeur d'Alene, he was asked if he was an artist.

"I never like that question, but I said yes," he says, describing how the conversation turned into an opportunity to submit work to Emerge's annual pop-up show.

To Parker's surprise, the three pieces he submitted were accepted.

"That really kind of kicked things off," says Parker, whose work since leaving NAC Architecture in 2021 has been featured at Dean Davis Studios and Emerge. With titles like Forest Path and Deep Blue, Parker writes in his artist statement that his work embodies "experiences as visual expressions."

A backpack hangs in the studio Parker has created in his Moran Prairie home, a reminder to get out and explore. A blanket from his Morocco trip covers a chair, while the scant wall space is covered with some of Parker's own art, one of his children's artworks and an African mask.

The 120-square-foot basement space also contains his work desk, computer and a bookcase. A metal flat file holds his paints, drawing pens, and stacks of maps, Korean magazine images, and other types of paper he repurposes into his artwork.

In an ideal world, he'd redesign his studio space, says Parker, who is still active in architecture and has served as executive director of the Spokane chapter of the American Institute of Architecture since fall 2021.

"I feel like I got into architecture initially because it combined a lot of my interests in art and building and environmental sustainability," Parker says. "And so right now I feel like I've taken architecture, again, and separated it into individual pieces; the creative element is pretty much the heart."

The original print version of this article was headlined "Surface Structure"