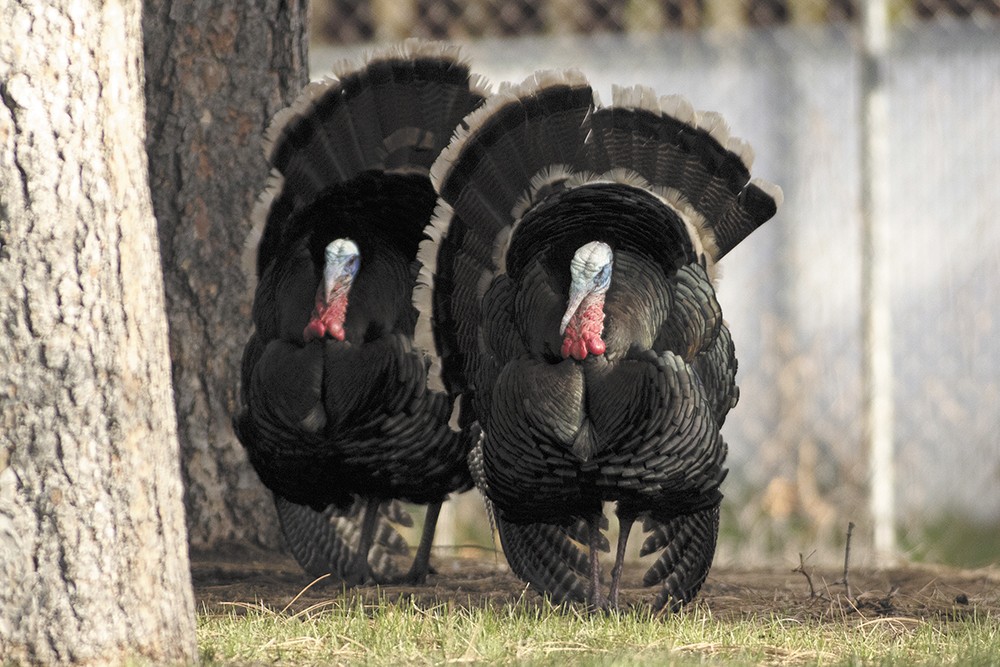 On their daily walk through the neighborhood, as he watches from his house, they assemble in his front yard and begin doing whatever it is a rafter of turkeys does — pooping, eating or conspiring against humans.

"All of the above," Griffith says.

In his backyard is a turkey trap. Maybe the turkeys have figured it out. They've already lost 12 of their own in that cage of metal bars, chicken wire and netting. Maybe they know that this house, in the South Hill's Cliff-Cannon neighborhood, is trouble.

Still, the turkeys must venture inside the trap sometimes; Griffith's backyard is literally covered with evidence — feathers and turkey droppings. It's only a matter of time before Griffith catches them again.

If Griffith looks out his kitchen window and sees turkeys inside the trap, he carefully gets down on his hands and knees, crawls into the sunroom and grabs the end of a white rope, which leads out of the house and through the backyard to the trap's metal gate. When the time is right, Griffith pulls the end of the rope as hard as he can. Then he hears a crash, which means the gate has shut and the turkeys can't get out.

The crash startles the turkeys, but after a second they stop caring. There's still food on the ground. It's not until the Washington Department of Fish and Wildlife shows up that they really start to worry.

There are a couple of ways to wrangle

a turkey into a box, says Candace Bennett, Washington Department of Fish and Wildlife conflict specialist. Neither is particularly easy. The first is to ambush the turkey into a corner, gather its wings and tuck its head down. The other option, which takes more skill, is to wait for them to jump, then grab their feet, causing their wings to relax.

In addition to causing potential property damage, Bennett says that turkeys may pose a health risk. In 2008, a South Hill parent reported their toddler contracted salmonella after the child played in grass covered in turkey droppings. While the Department of Fish and Wildlife could not confirm that the turkeys were responsible, there are some concerns that they may cause similar problems, Bennett says.

Last year at least 57 Washingtonians, including many children, got sick from contact with live poultry. Over the past four years, 211 people got sick from salmonella through contact with these animals, according to the state department of health. Birds can carry salmonella germs on feathers, feet and beaks. The germs also get on cages, coops and areas where the birds roam.

But these cases mostly came from people who raised chickens or ducklings. Bennett says there have been no more reports of wild turkeys spreading salmonella to humans in the city since 2008.

The 12 turkeys caught in the trap behind Griffith's house were not killed. Instead, the Department of Fish and Wildlife dropped them off outside of the city, somewhere near Kettle Falls. Bennett says those 12 turkeys are a small dent in the overall population in Spokane. There are as many as 250 turkeys now on the South Hill, she says, and the number keeps growing.

Wild turkeys are not native to in Eastern Washington. They were brought here in the early 1900s by the Department of Fish and Wildlife for hunting purposes. Sometime in the past decade, however, there was a drop-off in wild turkey hunting in the area, Bennett says.

Seeing turkeys within city limits, especially a city as big as Spokane, is uncommon. Bennett says Spokane just happens to have favorable conditions for turkeys. It's easy for them to migrate into the city, there are few predators, and the tall pine trees are ideal for roosting at night.

Using any projectile — including firearms, paintball guns or bows and arrows — to injure or kill turkeys is illegal within city limits. Killing a turkey by other means (strangling it, for example) is illegal unless it's for personal safety. So South Hill residents are limited in their ways to address the turkey population, she says.

This spring, for the second straight year, Bennett will lead residents on a turkey egg hunt in which the eggs will be coated with corn oil, so they don't hatch. Yet the population still grew after last year. Much of that is because last spring's weather was perfect for ground-nesting birds to have a good hatch year. This year is projected to be another good season.

When it comes to turkeys, Bennett says she's heard different things from the community. Some say they don't want any in the city, while others say they want to see even more. A majority say they like seeing some turkeys, but the current population is out of control.

Griffith remembers when he saw

his first turkey in Spokane. He thought it was amazing.

Then the winter came, and there were more, and then eventually they became a nuisance. Griffith tried everything to shoo them away, including shooting at them with Nerf guns. When a neighbor saw that, Griffith thought he was about to be scolded, but instead they said, "Good, we hate those f---ing things."

The turkey trap set up in Griffith's backyard, with the help of the Department of Fish and Wildlife, took a couple of weeks for the turkeys to get used to before Griffith trapped any. Bennett and Griffith also have discussed creating a decoy trap to lure more turkeys.

But turkeys — and this may be hard to believe — are smarter than people think, Bennett says. They know where to hide their nests. They learn what is and what isn't a real threat.

And when they're in the middle of the road, taking their time, seemingly unaware of the car honking at them from 4 feet away? That's just laziness, says Bennett.

"They're only going to expend as much energy as they actually need to." ♦