A U.S. president and his top advisor get drunk on the eve of resignation in Stage Left's Nixon's Nixon 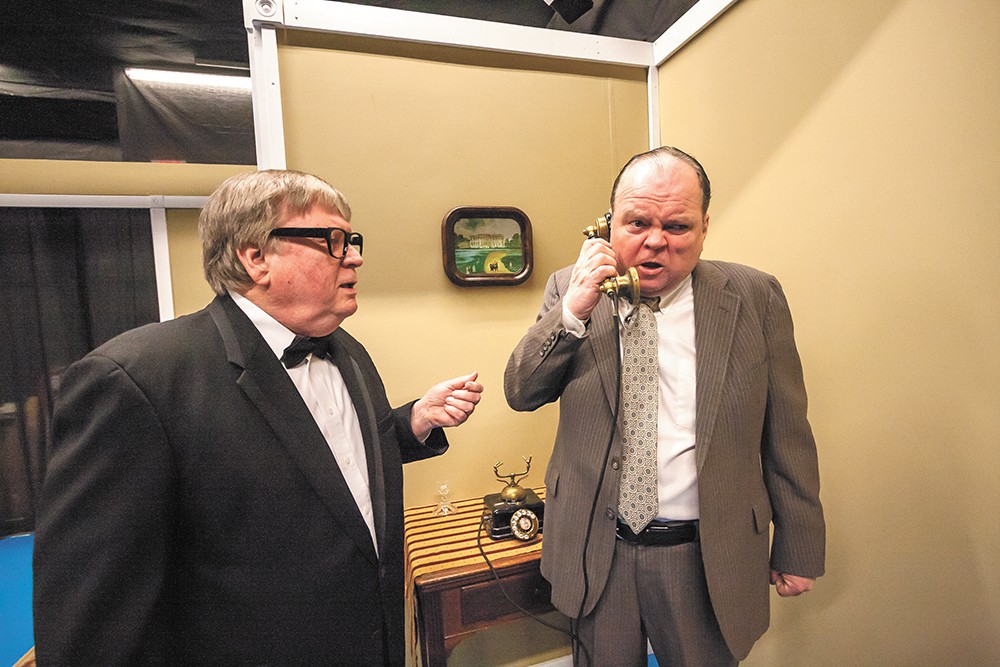 that announced his intention to resign. It was an act without precedent in American history — an ignominious resolution to the protracted Watergate scandal, which began when five men were arrested for breaking into the Democratic National Committee headquarters in June 1972. So significant was Watergate to the national political psyche that its suffix would become synonymous with controversy and egregious abuse of power.

Since then, Nixon himself has become an object of fascination not only for biographers, but for filmmakers and playwrights as well: Oliver Stone's Nixon (1995), Peter Morgan's Frost/Nixon (2006) or the forthcoming Elvis & Nixon starring Kevin Spacey. For many of the same reasons, he's also become an object of ridicule: Just watch one of Nixon's power-mad "guest" appearances in the animated series Futurama as a disembodied head of state.

"Nixon's Nixon all takes place a over couple of hours the night before Nixon resigns," says director Kyle Smock. "It's late, Nixon's been drinking. He calls [Henry] Kissinger into the Lincoln sitting room, and the play dramatizes what is thought to have happened that evening. It's Nixon not really sure he wants to resign, but at the same time knowing he obviously has to. Then you've got Kissinger, wanting to make sure he still has a job the next day."

But anyone who assumes that this promises an evening of philosophical agonizing and stuffy, statesman-like chitchat might be surprised.

"It's a crude play in that there's a ton of profanity. Nixon was a bigot, and every other word out of his mouth was the F-word in real life. This play has a lot of that in there — but in a really funny way."

Both Nixon and Kissinger also deviate from the "back-and-forth volley of conversation" by playacting within the play.

"There are several pieces where Nixon talks about how the history books are going to remember them, and they re-enact, for example, the Moscow Summit, where Nixon insists that Kissinger play Nixon, and Nixon plays [Leonid] Brezhnev with a parody of a Russian accent," says Smock. Another scene re-enacts Nixon's landmark visit to China in 1972. A tipsy Kissinger plays Chairman Mao.

Smock calls these re-enactments "glimpses of history" that speak to an audience beyond political buffs or those who simply lived through Watergate.

Nixon is being played by Ron Ford, who directed Red Hot Patriot: The Kick-Ass Wit of Molly Ivins at Stage Left back in December. Bob Nelson (Marx in Soho, A Walk in the Woods) stars opposite him as Henry Kissinger.

"Ron is an uncanny Nixon. And Bob's done great at emulating Henry Kissinger, so you're able to really enjoy the story without thinking, 'Oh, he doesn't really look like him,' or 'He doesn't sound like him.' They both do a really great job of pulling off the characters."

Given that he just finished directing The Hobbit at Theater Arts for Children, this two-actor historical dramedy marks a major shift of gears for Smock, but he says that Lees' play appealed to him on account of the disconcerting parallels between Watergate and the political "circus" of the Donald Trump campaign.

"I read a quote recently that Trump is in public what Nixon was in private," he says. "So I think there's a bit more renewed interest in Nixon right now because of the correlation to Trump, and Nixon is a guy no one would ever re-elect as president." ♦