Local food trucks continue to feel the heat from the city 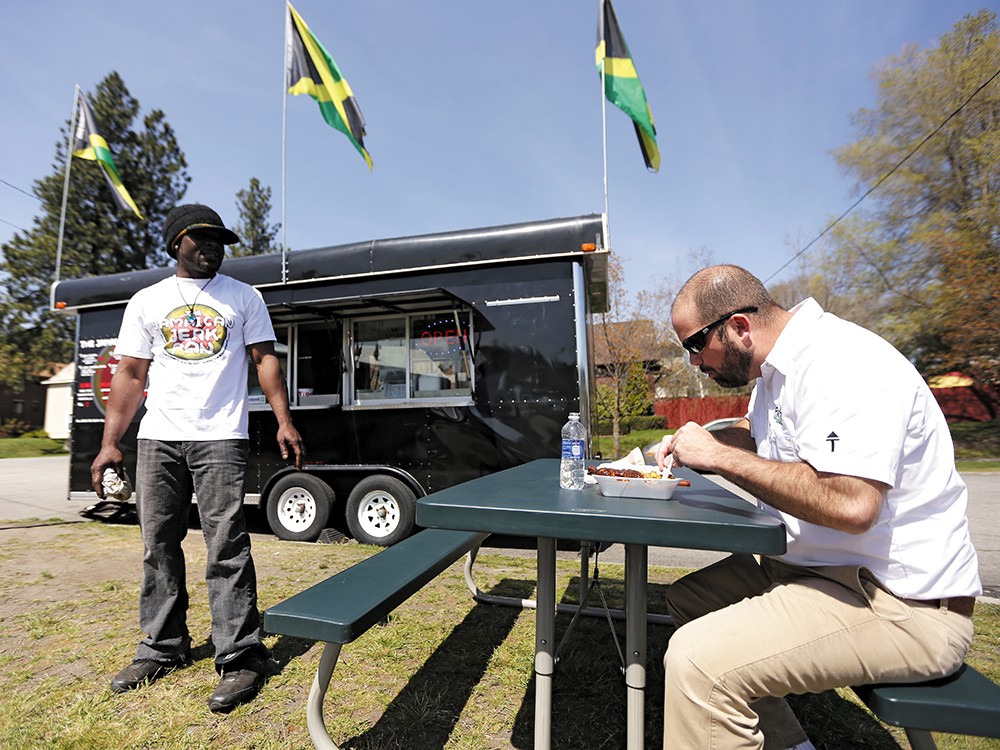 Sabrina Sorger and her husband Roian Doctor take great pride in what they do. Last Tuesday morning — before lunch customers lined up for plates of jerk chicken and curry tofu with cabbage salad and green peas — Doctor carefully polished the black exterior of their food truck, the Jamaican Jerk Pan, until it gleamed. Three Jamaican flags, towering from the truck’s roof, whipped in the wind.

In Spokane’s fledgling food truck scene, after two years of service the Jamaican Jerk Pan is one of the longest-running carts around — not to mention the only place to get Jamaican cuisine between Seattle and Minneapolis. But in those two years, the couple has endured constant mixed messages and questions from city officials on every detail from zoning to sidewalk use. Sorger and Doctor have been patient, complying with confused city officials and police officers every step of the way.

But last week, things got messy.

At around 8:45 am on July 22, the couple received a call from a police officer that their food truck would be towed in 15 minutes to make way for a road construction crew. Doctor says they received no prior notification that they would need to move, and were happy to comply. But they needed time to get there from their Green Bluff home.

When Doctor arrived on the scene, the lock had been picked on the trailer hitch of the food truck, which was already mounted to a tow truck. He protested, convincing the driver to allow him to tow his own business away. Even then, they were slapped with a $200 tow ticket and were forced to close down for the day.

The city launched a project in early May to make the rules clearer for food trucks. Sorger says those new rules couldn’t come soon enough. Andrew Worlock, a city planner who has been leading the Mobile Food Vendor Project, admits enforcement of the rules has been sticky. He would like to see the haze of the situation clear by summer’s end.

“I think the big difference is that the rules are going to be clearer, so if we get a complaint and [the city investigates], they’ll be able to discern pretty quickly whether or not they’re complying with the rules or not,” he says. “That’s kind of one thing we’re lacking right now: It’s not real clear what the rules are and what you have to do to comply.

“When you adopt new regulations, there’s always a transition period,” he adds. “My expectation is once we have this all in place, hopefully it’s going to make those situations clearer. And I won’t say it’s going to prevent them, but hopefully so.”

Sorger says towing tickets and being forced to shut their food truck down four times for road construction in the month of July is directly impacting her business.

“I’ve lived here forever. I like this town and I don’t like hearing people talk bad about it and say Spokane sucks,” she says. “But in this instance, Spokane does suck. And I wish it wasn’t that way.”