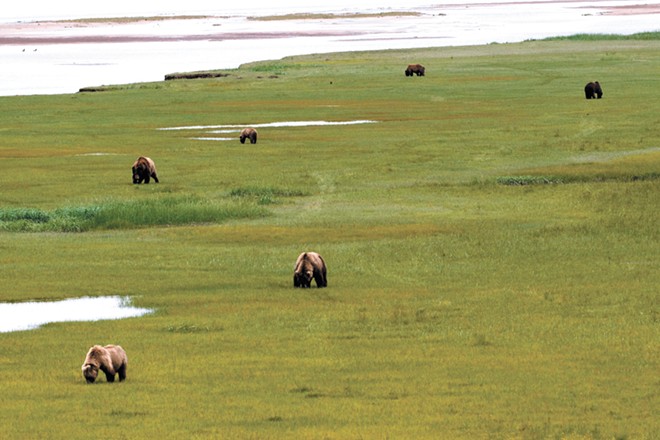 WASHINGTON — Baiting grizzly bears with doughnuts soaked in bacon grease. Using spotlights to blind and shoot hibernating black bear mothers and their cubs in their dens. Gunning down swimming caribou from motorboats.

Hunting methods that for years were decried by wildlife protectors and finally banned as barbaric by the Obama administration will be legal again on millions of acres of Alaskan wilderness in time for the warm July weather.

The National Park Service policy published the new rules in the Federal Register on Tuesday, reversing Obama administration rules and giving trophy hunters, outfitters and Alaskans 30 days to prepare to return to national preserves in Alaska with practices that seemed relegated to the history books. Among the reinstated tactics: killing wolves and coyotes, including pups, during the season when mothers wean their young, and using dogs to hunt bears.

Expanding hunting rights on federal lands has been a priority under the Trump administration, and an issue championed by the president’s son, Donald Trump Jr., an avid hunter.

Hunting advocates and Alaska state leaders had opposed the Obama-era restrictions as an encroachment on states’ rights and an infringement on their livelihoods.

Eddie Grasser, director of wildlife conservation for Alaska Department of Fish and Game, said the tactics are misunderstood.

“The regular hunters in the state don’t hunt that way and neither do the residents that are coming in, especially ones that are guided,” he said.

“This would allow extreme cruel killing methods on over 20 million acres of national preserves in Alaska,” said Laura Smythe, a staff attorney with the Humane Society of the United States.

In 2015, the Obama administration codified the Park Service’s role by enacting a rule that eliminated the ability of sport hunting and trapping on federal public lands. The new rule says state hunting regulations should take priority over federal ones.