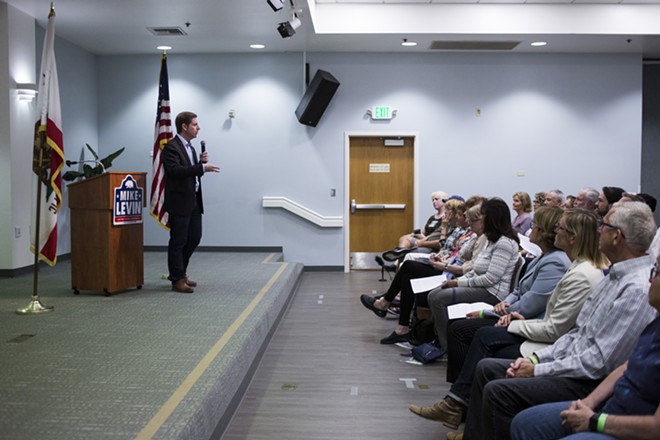 WASHINGTON — Democratic congressional leaders emerged from a meeting at the White House on Tuesday and announced that President Donald Trump had agreed to pursue a $2 trillion infrastructure plan to upgrade the nation’s highways, railroads, bridges and broadband.

Sen. Chuck Schumer, D-N.Y., the minority leader, said that there had been “goodwill” in the meeting and that it was “different from some of the other meetings that we’ve had.” Speaking alongside House Speaker Nancy Pelosi, D-Calif., he said the group planned to meet again in three weeks, when Trump was expected to tell them how he planned to actually pay for the ambitious project.

The first substantive sit-down between Trump and Democratic leadership since the 35-day government shutdown last winter unfolded at a tense moment.

Since their last face-to-face meeting at the White House, the special counsel released his report. Pelosi, since then, has tried to caution her colleagues against impeaching the president, while facing growing pressure from her caucus and from 2020 Democratic presidential contenders to do so. Trump is also going to great lengths to stonewall expanding investigations by House Democrats.

But speaking to reporters on the driveway outside of the West Wing, Schumer told reporters there was no issue with pursuing both oversight and legislation along parallel tracks.

“In previous meetings, the president has said if these investigations continue, I can’t work with you,” Schumer said of the president.

“He didn’t bring it up. I believe we can do both at once,” Schumer added. “The two are not mutually exclusive and we were glad he didn’t make it that way.”

“Infrastructure Week” has become a recurring theme of the Trump presidency. A $1 trillion infrastructure plan remains one of Trump’s unfulfilled promises from his 2016 campaign. The effort took a back seat to the administration’s failed attempt to repeal the health care law and then to its successful passage of a tax overhaul in 2017.

The original plan was also one that everyone rejected from the beginning — Trump even criticized public-private partnerships, which were key to the plan’s financing — and there has not been a new plan put forward since.

But Democrats went to the White House for a meeting, intent to play along as if there was a chance.