Trump, at Putin’s Side, Questions U.S. Intelligence on 2016 Election 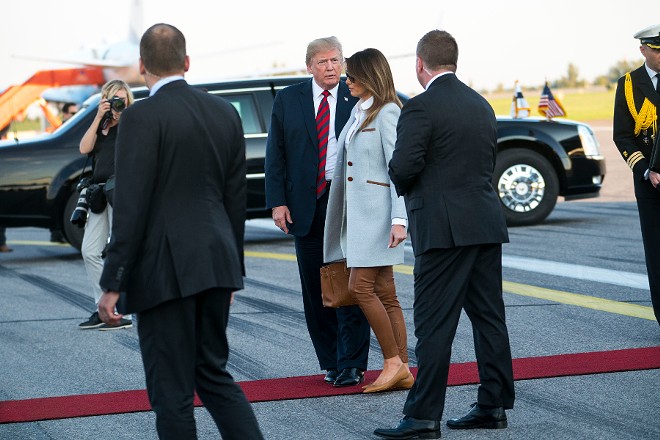 Doug Mills/The New York Times
President Donald Trump and first lady Melania Trump arrive in Vantaa, Finland, July 15, 2018. Trump, adding to the list of allies he has clashed with this past week, said in an interview released on Sunday that he considered the European Union a trade “foe,” days after a contentious NATO summit meeting.


HELSINKI — President Donald Trump stood next to President Vladimir Putin of Russia on Monday and publicly challenged the conclusion of his own intelligence agencies that Moscow interfered in the 2016 presidential election, wrapping up what he called a “deeply productive” summit with an extraordinary show of support for a leader accused of attacking American democracy.


“They said they think it’s Russia; I have President Putin, he just said it’s not Russia,” Trump said, only moments after the Russian president conceded that he had favored Trump in the election because of his promises of warmer relations with Moscow.

“I will say this: I don’t see any reason why it would be” Russia that was responsible for the election hacking, Trump added. “I have great confidence in my intelligence people, but I will tell you that President Putin was extremely strong and powerful in his denial today.”

The 45-minute news conference offered the remarkable spectacle of the American and Russian presidents both pushing back on the notion of Moscow’s election interference, with Putin demanding evidence of something he said had never been proven and Trump appearing to agree.

When asked whether he believed Putin or his own intelligence agencies, Trump changed the subject, demanding to know why the FBI never examined the hacked computer servers of the Democratic National Committee and asking about the fate of emails missing from the server of Hillary Clinton, his campaign rival.

Trump’s statements were a remarkable break with his own administration, which on Friday indicted 12 Russian intelligence officers for cyberattacks intended to interfere in the presidential contest.

In the United States, critics of Trump reacted quickly to the day’s events. Sen. Ben Sasse, R-Neb., responded sharply to Trump’s statement that Russia and the United States shared blame for their deteriorated relationship.

“This is bizarre and flat-out wrong,” he said in a statement. “The United States is not to blame. America wants a good relationship with the Russian people, but Vladimir Putin and his thugs are responsible for Soviet-style aggression. When the President plays these moral equivalence games, he gives Putin a propaganda win he desperately needs.”