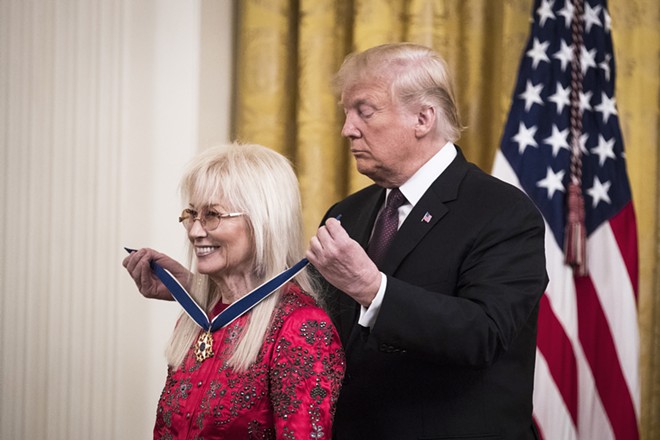 Sarah Silbiger/The New York Times
President Donald Trump presents the Presidential Medal of Freedom to Miriam Adelson during a ceremony at the White House, in Washington, Nov. 16, 2018. Adelson is a doctor, philanthropist and the wife of Sheldon Adelson, a casino magnate and multibillionaire.

Adelson, a doctor and philanthropist, is hardly a household name. But she is the spouse of Sheldon Adelson, a casino magnate and multibillionaire. In 2016, the Adelsons provided badly needed backing for Trump, and in the recent midterm elections contributed more than $120 million to Republicans. And Sheldon Adelson has a direct line to the president and helped to persuade him to move the U.S. embassy in Israel to Jerusalem.

The Presidential Medal of Freedom, established by President John F. Kennedy, has always reflected a president’s personal tastes, biases and, sometimes, to be sure, political reward. President Barack Obama, for instance, awarded the medal to Warren Buffett, the legendary investor whose support in 2008 helped to give him credibility.

Kyle Kopko, a professor of political science at Elizabethtown College in Pennsylvania who has written scholarly reports on the medal awarding process, said Trump has simply followed in that tradition.

“In fairness, there have been a number of recipients who were selected for their political dispositions — and I am sure that was a factor here,” Kopko said. “But I am sure it was not the only factor.”

“We probably oversimplify because, oh, the Adelsons gave a lot of money,” he said. “There are other factors that make Miriam Adelson an ideal candidate in Trump’s mind.”

Miriam Adelson and her husband established the Adelson Medical Research Foundation and two other research centers specializing in addiction treatment. “As a committed member of the American Jewish community, she has supported Jewish schools, Holocaust memorial organizations, Friends of the Israel Defense Forces, and Birthright Israel, among other causes,” the White House said.

Most of Trump’s choices — Scalia, Hatch and Staubach, in addition to Adelson — are strong Republicans. Page has been aligned with the Democrat-Farmer-Labor Party in Minnesota but his election was considered nonpartisan. Babe Ruth and Elvis Presley were not known to have clear partisan leanings.