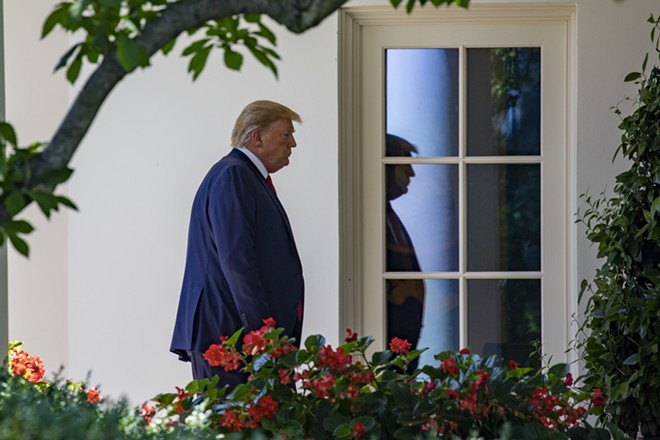 Samuel Corum/The New York Times
President Donald Trump walks to the Oval Office after returning from a ceremony at the Jamestown Settlement Museum, at the White House in Washington, July 30, 2019. Trump hailed the contributions of African-Americans to the building of the nation during the earlier ceremony on Tuesday paying tribute to democracy in the New World, even as he continued to wage war on some of his most prominent black critics.
By Peter Baker and Katie Rogers
New York Times News Service

JAMESTOWN, Va. — President Donald Trump resumed his attacks on Baltimore and its congressman Tuesday as African American state lawmakers from Virginia planned to boycott his scheduled speech commemorating the 400th anniversary of representative democracy in the Western Hemisphere.

Trump again disparaged Rep. Elijah Cummings, D-Md., whom he has accused in recent days of running a “disgusting” congressional district.

“Baltimore is an example of what corrupt government leads to,” Trump told reporters as he left the White House for the event in Virginia. “I feel so sorry for the people of Baltimore, and if they ask me, we will get involved.”

Facing questions about his apparent willingness to divide his supporters and opponents along racial lines in recent days, Trump insisted that he was the “the least racist person there is anywhere in the world.” Then he called the Rev. Al Sharpton, another recent adversary, “a racist.”

This line of self-defense came a day after the Virginia Legislative Black Caucus, which represents elected members of the House of Delegates and state Senate, said in a statement that its members cannot “in good conscience sit silently” as a president who has promoted racial divisions is given such a prominent platform.

“It is impossible to ignore the emblem of hate and disdain that the president represents,” the caucus said in its statement. The statement added that Trump’s “repeated attacks on black legislators and comments about black communities” make him “ill-suited to honor and commemorate such a monumental period in history, especially if this nation is to move forward with the ideals of ‘democracy, inclusion, and opportunity.’”

Cummings, the chairman of the House Oversight and Reform Committee, has emerged as a major foil for the president as his panel presses investigations into Trump’s administration.

The caucus is holding alternative events in Richmond, including a wreath-laying at the Virginia State Capitol to honor African American lawmakers who served after the Civil War.

On Tuesday, Trump dismissed questions about whether he was hurting himself politically by relentlessly fueling racial tensions in recent days.

“I think I’m helping myself,” Trump said. “These people are living in hell in Baltimore.”