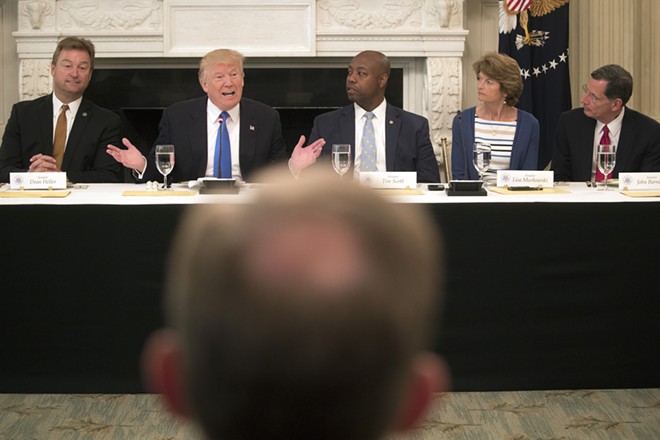 
WASHINGTON — President Donald Trump vigorously defended an all-but-dead Senate health care bill Wednesday, pressing Republicans to stay in Washington and improve the proposal or risk being tagged as supporting the current system, which he called a “big lie.”


At a lunch at the White House with Republican senators, Trump gave the latest in a series of shifting reactions to the collapse this week of the Senate’s health care overhaul effort, and what amounted to a belated sales pitch for a measure that Republicans have privately complained he has done little to champion.

It was a stark turnabout from earlier this when Trump said Congress should let President Barack Obama’s signature legislation fail, and blame Democrats.

Instead, Trump said Republicans should get back to work, ignoring clear indications from Capitol Hill that not enough Republicans are willing to support the proposal.

“Any senator who votes against starting debate is really telling America that you’re fine with ‘Obamacare,'” he said.

It was a pep talk that could have been more effective in the last several days as Republican leaders desperately sought support.

The prospect of repealing the health care law appeared to be doomed Tuesday when an 11th-hour effort to force a vote on the matter failed and three Republican senators said they would not vote to repeal the law without a replacement.

Trump has never been completely engaged with the health care repeal-and-replace efforts after his initial foray with House members in April failed.

He has occasionally cajoled members of Congress, primarily through his Twitter feed, but he has seemed hesitant at best. And his advisers have been divided on how involved he should be, leaving Trump to weigh in sporadically.

On Wednesday, Trump used a combination of humor and thinly veiled threats to pressure wavering senators.

Sitting beside Sen. Dean Heller, R-Nev., who has been outspoken about his concerns with the proposal, Trump said, “Look, he wants to remain a senator, doesn’t he? OK, and I think the people of your state, which I know very well, I think they’re going to appreciate what you will do.”

Trump also alluded to several conservatives who came out against the measure Monday night, saying he had been “surprised” because the senators were “my friends.”