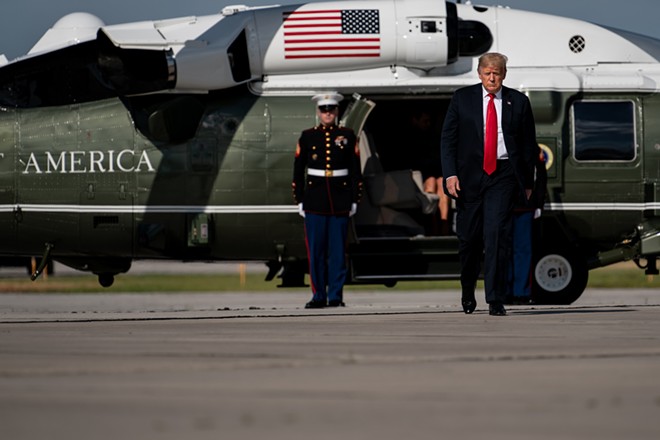 Erin Schaff/The New York Times
President Donald Trump walks from Marine One to board Air Force One in Green Bay, Wis., June 25, 2020. Trump will not try again to immediately terminate President Barack Obama’s program that protects young undocumented immigrants, after the Supreme Court’s decision to invalidate Trump’s first attempt make good on a crackdown that is at the core of his political identity.
By Michael D. Shear and Zolan Kanno-Youngs
The New York Times Company

WASHINGTON — President Donald Trump will not try again to immediately terminate President Barack Obama’s program that protects young immigrants living in the country illegally, after the Supreme Court’s decision to invalidate Trump’s first attempt make good on a crackdown that is at the core of his political identity.

Instead, officials said that the administration would conduct a “comprehensive review” of the program, known as Deferred Action for Childhood Arrivals, while it imposes new limits on the protections against deportation that have allowed about 650,000 immigrants to live and work in the country legally.

Immigrants who have already had DACA protections will be allowed to renew their status under the program for one year, rather than two, officials said. And they said that first-time applicants to the program would be rejected.

Officials declined to say how long the review would take or whether it would be completed before the general election in November, although the decision to allow one-year renewals suggested that Trump and his aides did not envision making another attempt to end the program before the vote.

The announcement appears to be directly contrary to an order by a federal judge, who ruled last month that the administration must immediately begin accepting new applications for the DACA program. Officials said they expected court challenges from immigration advocates, given the Supreme Court’s decision and the judge’s order.

The move ensures that the fate of immigrants who were brought to the United States as young children, often referred to as Dreamers, will be debated during the fall presidential campaign and will most likely be determined by the results. Polls show that a majority of the American public does not want them deported.

Trump’s initial move to end DACA in 2017 was blocked for more than two years by federal judges who said he had failed to provide proper justification for ending a program that allowed some young undocumented immigrants to live and work in the United States without the threat of deportation.

Thousands of young people who have turned 15 since the original rescission — the minimum age required to apply — had expected the government to begin accepting new applications to comply with the Supreme Court’s decision.

However, the agency that processes DACA applications has been rejecting them, according to immigration lawyers, while it has continued to process renewals for current recipients.