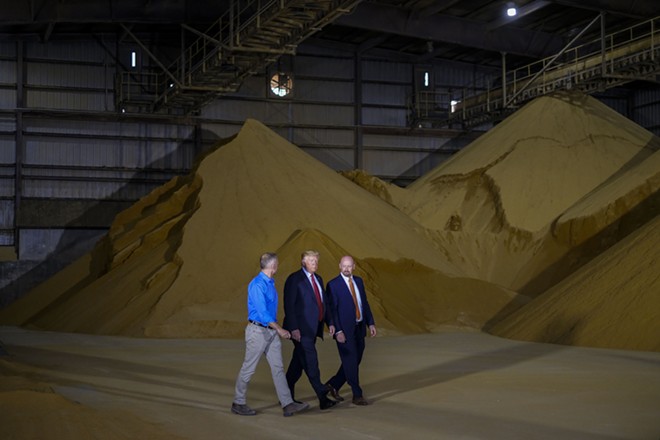 Gabriella Demczuk/The New York Times
President Donald Trump tours the Southwest Iowa Renewable Energy plant in Council Bluffs, Iowa, June 11, 2019. A plan proposed by the Environmental Protection Agency and the Department of Agriculture would overhaul the system of quotas for ethanol, a fuel made from corn and other crops, to relieve pressure on farmers at a time when the Trump administration is escalating its trade war with China and Europe.
By Lisa Friedman
The New York Times Company

WASHINGTON — The Environmental Protection Agency and the Department of Agriculture jointly proposed new rules Friday that would increase ethanol consumption at the expense of oil refineries to help corn and soybean farmers buffeted by President Donald Trump’s trade wars.

The plan would overhaul the system of quotas for ethanol, a fuel that is made from corn and other crops, as they blend their fuels. Its overall goal is to increase the sale of the biofuel beyond the current mandate of 15 billion gallons annually.

It also will ensure a gasoline blend made of 15% ethanol will be available at pumps already in place at most gas stations, rather than requiring the installation of new pumps. The proposal also includes trade measures to increase the access of ethanol to foreign markets.

The move is widely viewed as an effort to relieve pressure on farmers at a time when the Trump administration is escalating its trade war with China and Europe.

Farmers are critical to the president’s reelection effort, and their anger is forcing Trump to favor grain farmers over the oil and gas industry, which has resisted fuel blends that are higher in ethanol as expensive and inefficient.

Midwestern lawmakers greeted the proposal warmly. Sen. Chuck Grassley, R-Iowa, a critic of the trade war, said Trump had “listened to the concerns of farmers and biofuel providers and delivered on their behalf.”

But oil-state lawmakers and oil-industry leaders were critical. Sen. John Barrasso, R-Wyo.,chairman of the Committee on Environment and Public Works, which oversees the EPA, issued a statement saying he believed it would lead to shuttered refineries and lost jobs.

Amid the trade wars, skepticism in the farm states remains high, in part because the administration has been behind many of the waivers granted to refiners seeking exemptions from ethanol mandates.

Mike Sommers, president of the American Petroleum Institute, warned it could result in higher costs for consumers at the gas pump.