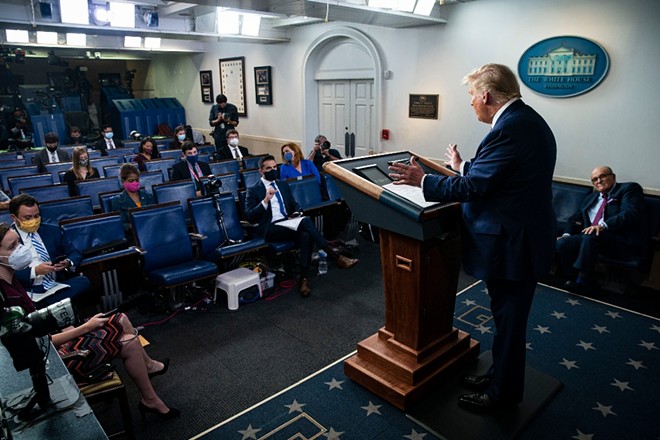 Al Drago/The New York Times
President Donald Trump speaks during a news conference at the White House in Washington, Sept. 27, 2020. Trump shifted his position overnight on a sweeping New York Times investigative report on his taxes, falsely accusing the paper on Monday of using “illegally obtained information” after initially saying on Sunday that the article was “totally fake news.”

In a series of tweets Monday morning, Trump did not explicitly deny the revelations that he paid only $750 in federal income taxes in 2016 and 2017, and that he paid almost no taxes in other years because of huge losses in many of his businesses.

Instead, Trump lashed out at the suggestion that he is not as wealthy and successful as he has repeatedly claimed to be, insisting — without providing any evidence — that his finances are in very good shape.

“If you look at the extraordinary assets owned by me, which the Fake News hasn’t, I am extremely under leveraged — I have very little debt compared to the value of assets,” he insisted on Twitter.

In fact, as the article notes, Trump is heavily in debt, and much of what he owes to lenders will have to be paid back in just a few years.

“He is personally responsible for loans and other debts totaling $421 million, with most of it coming due within four years,” the report says. “Should he win reelection, his lenders could be placed in the unprecedented position of weighing whether to foreclose on a sitting president.”

Trump also said Monday that he “might release” financial statements that show “all properties, assets and debts,” but did not say when he might do that. “It is a very IMPRESSIVE Statement,” he wrote.

The report revealed that Trump paid no federal income taxes in 11 of 18 years that the Times examined because of huge losses in other businesses that Trump owns. The president used provisions in the tax law to offset his tax obligations with the losses.

The article notes that the Times “obtained tax-return data extending over more than two decades for Trump and the hundreds of companies that make up his business organization, including detailed information from his first two years in office.”