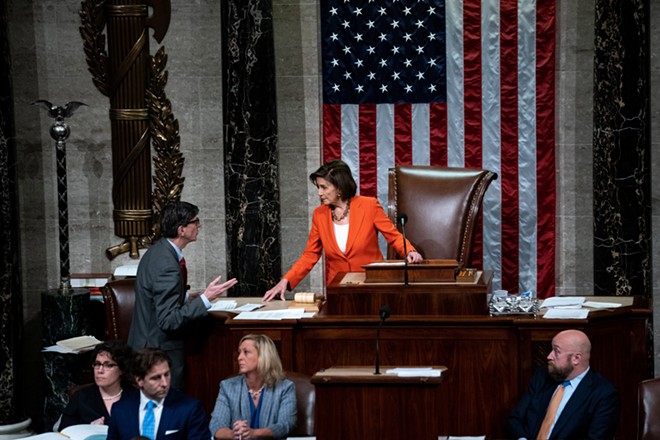 Erin Schaff/The New York Times
House Speaker Nancy Pelosi (D-Calif.) presides as the House of Representatives votes on a resolution outlining the rules for the next phase of the impeachment inquiry into President Donald Trump on the floor of the House in Washington on Thursday, Oct. 31, 2019. A bitterly divided House of Representatives voted on Thursday to endorse the Democratic-led impeachment inquiry into President Donald Trump, in a historic action that set up a critical new public phase of the process and underscored the toxic political polarization that serves as its backdrop.
By Sheryl Gay Stolberg and Nicholas Fandos
The New York Times Company

WASHINGTON — The day after the House cast historic votes to impeach President Donald Trump, Democrats grappled Thursday with when to send the charges to the Republican-led Senate, hoping to gain leverage in a bicameral clash over the contours of an election-year trial.

With some leading Democrats pushing to delay transmittal of the articles and others advocating that they be withheld altogether, it appeared increasingly likely that the limbo could persist until the new year.

“We are ready,” said Speaker Nancy Pelosi, who said Wednesday night she was reluctant to send the charges or name the lawmakers who would prosecute the case against Trump until she was certain of a fair process for a Senate trial. “When we see what they have, we will know who and how many we will send over.”

Sen. Mitch McConnell, R-Ky. and the majority leader, has complicated the picture by asserting he would do everything in his power to quickly acquit the president.

McConnell argued that the delay reflected a weak case against Trump.

Trump, echoing McConnell’s remarks, took to Twitter to attack what he called a “pathetic” case.

Nerves were raw on both sides of the aisle the morning after the House voted to impeach Trump for abuse of power and obstruction of Congress related to his campaign to pressure Ukraine to smear Democratic rivals.

Some leading Democrats have cast doubt on whether a Senate trial will happen at all.

Pelosi has indicated she will work with House chairmen and Schumer to determine when the articles should be submitted.

In a letter sent Sunday night to McConnell, Schumer proposed a trial beginning Jan. 7 that would give each side a fixed amount of time to present its case, and called for four top White House officials who have not testified — including Mick Mulvaney, Trump’s acting chief of staff; and John Bolton, the president’s former national security adviser — to appear as witnesses.

Schumer said Democrats wanted a “fair and speedy trial” and that he had proposed a “very reasonable structure.”

“I have yet to hear one good argument why less evidence is better than more evidence, particularly in such a serious moment,” he added.