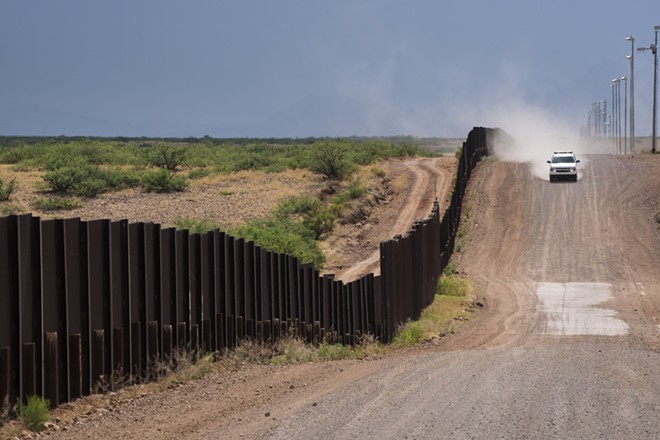 Todd Heisler/The New York Times
A U.S. Border Patrol vehicle drives along the Mexican border on a rancher's property in Naco, Ariz., June 9, 2016. More than 500 employees of the United States’ primary border security agency were charged with drug trafficking, accepting bribes and a range of other crimes over a two-year period, according to reports released on Oct. 12, 2018. Customs and Border Protection, the Border Patrol’s parent agency, employs over 60,000 people.

WASHINGTON — President Donald Trump plans to declare a national emergency so he can bypass Congress and build his long-promised wall along the border even as he signs a spending bill that does not fund it, the White House said Thursday.

The announcement of his decision came just minutes before the Senate voted 83-16 to advance the spending package in anticipation of final passage Thursday night by the House.

Trump’s decision to sign it effectively ends a two-month war of attrition between the president and Congress that closed much of the federal government for 35 days and left it facing a second shutdown as early as Friday, but it could instigate a new constitutional clash over who controls the federal purse.

“President Trump will sign the government funding bill, and as he has stated before, he will also take other executive action — including a national emergency — to ensure we stop the national security and humanitarian crisis at the border,” said Sarah Huckabee Sanders, the White House press secretary.

House Speaker Nancy Pelosi of California said Democrats were “reviewing our options” in responding to Trump’s anticipated declaration and did not rule out a legal challenge.

The spending legislation includes the seven remaining bills to keep the remainder of the government open through the end of September. House and Senate negotiators unveiled the 1,159-page bill Wednesday just before midnight, leaving little time for lawmakers to actually digest its contents.

“The president is once again delivering on his promise to build the wall, protect the border, and secure our great country,” Sanders said, as she announced Trump would sign it.

The border security compromise, tucked into the $49 billion portion of the bill that funds the Department of Homeland Security, provides $1.375 billion for 55 miles of steel-post fencing, essentially the same that Trump rejected in December, triggering the shutdown and far from the $5.7 billion he demanded for more than 200 miles of steel or concrete wall.

Legal experts have said Trump has a plausible case that he can declare a national emergency under current law, but it would almost surely prompt a court challenge.