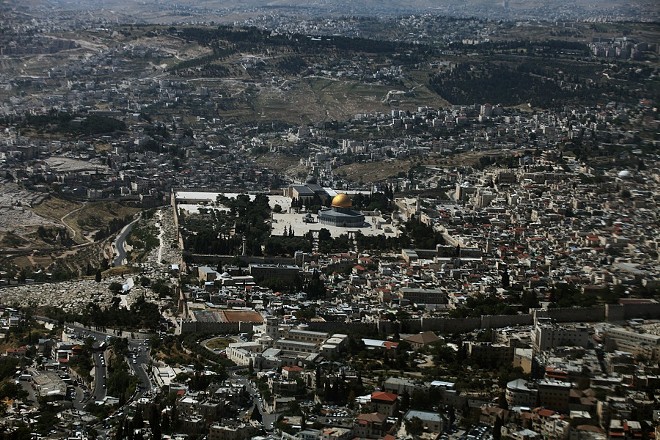 Rina Castelnuovo/The New York Times
An aerial view of the Old City of Jerusalem, with the Al-Aqsa Mosque at the center, on Jan. 24, 2010. President Donald Trump told Israeli and Arab leaders on Tuesday, Dec. 5, 2017, that he plans to recognize Jerusalem as the capital of Israel, a symbolically fraught move that would upend decades of American policy and upset efforts to broker peace between Israel and the Palestinians.
By MARK LANDLER
© 2017 New York Times News Service


WASHINGTON — President Donald Trump on Wednesday formally recognized Jerusalem as the capital of Israel, reversing nearly seven decades of U.S. foreign policy and setting in motion a plan to move the U.S. Embassy from Tel Aviv to the fiercely contested Holy City.


“Today we finally acknowledge the obvious: that Jerusalem is Israel’s capital,” Trump said at the White House. “This is nothing more or less than a recognition of reality. It is also the right thing to do. It’s something that has to be done.”

The president cast his decision as a break with decades of failed policy on Jerusalem, which the United States, along with virtually every other nation in the world, has declined to recognize as the capital since Israel’s founding in 1948. That policy, he said, brought us “no closer to a lasting peace agreement between Israel and the Palestinians.”

“It would be folly to assume that repeating the exact same formula would now produce a different or better result,” Trump declared.

Recognizing Jerusalem, he added, was “a long overdue step to advance the peace process.”

The president said the decision to recognize Jerusalem should not be construed as the United States taking a position on whether, or how, the city might ultimately be shared. But he offered little solace to the Palestinians, making no mention of their long-held hopes for East Jerusalem to be the capital of a Palestinian state.

Instead, Trump emphasized the domestic political dimension of the decision. He noted that he had promised to move the embassy during the 2016 presidential campaign, and added, “While previous presidents have made this a major campaign promise, they failed to deliver. Today, I am delivering.”

Though he did not mention it, Trump signed the same national security waiver signed by his predecessors, from Barack Obama to George W. Bush to Bill Clinton, which will allow the administration to keep the embassy in Tel Aviv for an additional six months. White House officials said that was unavoidable because it would take several years to move the embassy staff to a new facility in Jerusalem.