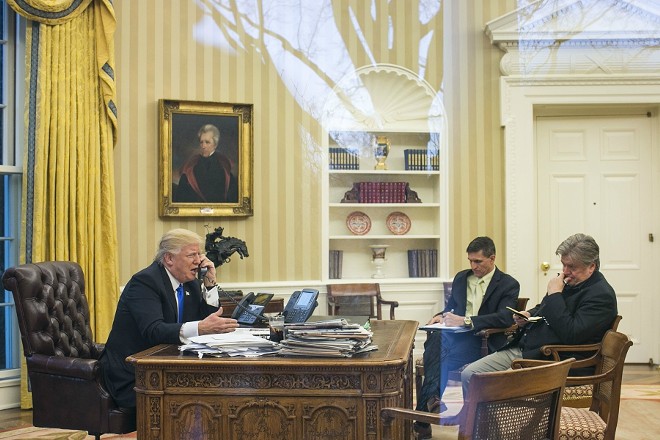 
WASHINGTON — President Donald Trump essentially excommunicated his onetime chief strategist, Steve Bannon, from his political circle Wednesday, excoriating him as a self-promoting exaggerator who had “very little to do with our historic victory” and has now “lost his mind.”


In a written statement brimming with anger and resentment, Trump fired back at Bannon, who had made caustic comments about the president and his family to the author of a new book about the Trump White House. While Bannon had remained in touch with Trump even after being pushed out of the White House last summer, the two now appear to have reached a breaking point.

“Steve Bannon has nothing to do with me or my presidency,” Trump said in the statement. “When he was fired, he not only lost his job, he lost his mind.”

Trump berated Bannon for the loss of a Senate seat in Alabama and said the former adviser did not represent his base but was “only in it for himself.” Rather than supporting the president’s agenda to “make America great again,” Bannon was “simply seeking to burn it all down,” Trump said.

“Steve pretends to be at war with the media, which he calls the opposition party, yet he spent his time at the White House leaking false information to the media to make himself seem far more important than he was,” he added. “It is the only thing he does well. Steve was rarely in a one-on-one meeting with me and only pretends to have had influence to fool a few people with no access and no clue, whom he helped write phony books.”

The president was responding to comments attributed to Bannon in a new book, “Fire and Fury: Inside the Trump White House,” by Michael Wolff. The forthcoming book was obtained by The Guardian, which first reported Bannon’s jolting remarks.

In the book, Bannon was quoted suggesting that Donald Trump Jr., the future president’s son; Jared Kushner, his son-in-law; and Paul J. Manafort, then the campaign chairman, had been “treasonous” and “unpatriotic” for meeting with Russians offering incriminating information on Hillary Clinton during a June 2016 meeting in Trump Tower.