Trump says U.S. will hit Mexico with tariffs on all goods 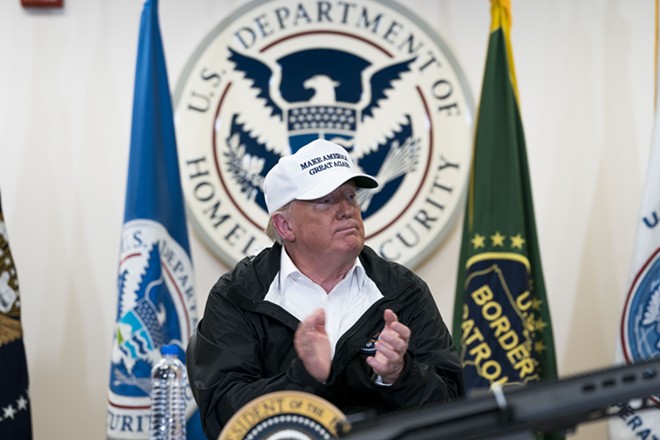 WASHINGTON — President Donald Trump said Thursday he planned to impose a 5% tariff on all imported goods from Mexico beginning June 10, a tax that he said would “gradually increase” until Mexico stopped the flow of unauthorized immigrants across the border.

The announcement, which Trump hinted at Thursday morning and announced on his Twitter feed, said the tariffs would be in place “until such time as illegal migrants coming through Mexico, and into our Country, STOP.”

In a presidential statement that followed Trump’s tweet, he said tariffs would be raised to 10% on July 1 “if the crisis persists,” and then by another 5% each month for three months.

“Tariffs will permanently remain at the 25% level unless and until Mexico substantially stops the illegal inflow of aliens coming through its territory,” the statement said.

Trump’s announcement came the same day his administration told Congress it planned to seek congressional approval of the new trade pact with Mexico and Canada, known as the United States-Mexico-Canada Agreement.

The president has used the threat of tariffs to try to pressure foreign leaders into taking a wide array of actions, from renegotiating trade deals to limiting the amount of metal or cars they ship to the United States.

In April, he threatened to place a 25% tariff on Mexican cars if the country would not take action to stem the flow of migrants through the southern border, walking back a promise he had made in the revised North American trade agreement to exempt Mexico from such a measure.

The president has told his advisers that he likes tariffs because they can be done immediately and unilaterally. But tariffs are typically used to counter trade-related violations.

It is not clear what legal authority the president would use to issue levies on Mexican immigration. If the administration followed through on such an action, it would likely face serious legal challenges.