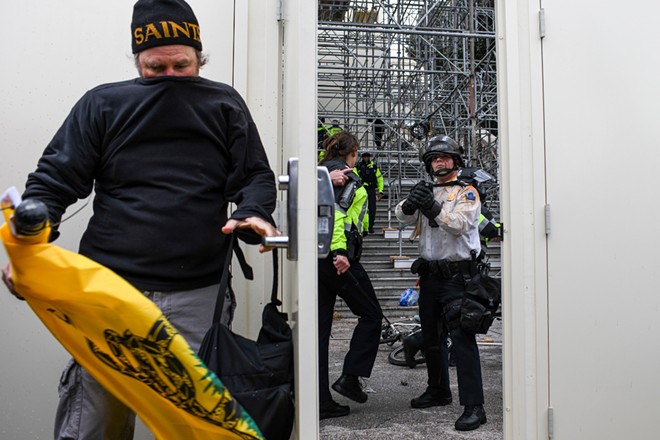 Kenny Holston/The New York Times
A protester breaches a security door at the Capitol in Washington and is met by police officer, Jan 6, 2020. The Capitol building was placed on lockdown, with senators and members of the House locked inside their chambers, as Congress began debating President-elect Joe Biden’s victory. President Trump addressed supporters near the White House before protesters marched to Capitol Hill.

A protest turned into a violent mob in Washington, D.C., on Wednesday afternoon as hundreds of supporters of President Donald Trump forced their way past police barricades into the U.S. Capitol Building, causing mayhem.

News outlets on the ground report at least one woman was shot while entering the building, while lawmakers, staffers and media inside were forced to shelter in place and/or escape to secure locations. Politicians in the presidential line of succession were moved to undisclosed secure locations, CSPAN reports.

Washington state lawmakers, some of whom were poised to object to the certification of the Electoral College vote this afternoon, called for the mob to stop the violence and remain peaceful.


In response to questions about my safety: I'm safe and so is my staff, but I condemn in the strongest terms the hate-fueled violence we are seeing in our nation's Capitol today, as should every leader committed to the peaceful transfer of power in our country.


Republican Rep. Cathy McMorris Rodgers, who had planned to object to certifying the election results today, also condemned the actions:


Stop these attacks on Capitol Police who serve to protect the People's House. Protesting peacefully is your right. Violence, aggression, and breaching security perimeters are not. Stop this now.

She was quickly lambasted by Democratic State Rep. Marcus Riccelli, who represents Spokane in the state Legislature:


.@cathymcmorris You did this and you are part of this. Make no mistake. This is your legacy. You have put not only the lives of the Capitol Police at risk, but our democracy. Instead of showing leadership to put a stop to this months ago you have helped lead this insurrection. https://t.co/jXtYkJR6X0


Meanwhile, Matt Shea and fellow Trump supporters gathered with calls to "Stop the Steal," referring to the debunked claim of election fraud — with many honking their horns repeatedly while driving through downtown Spokane.


People who work in Spokane City Hall were sent information "for awareness only" from city spokesman Brian Coddington, who noted that the protesters driving through downtown planned to march on City Hall or Riverfront Park around 2 pm.

In an email just after 1 pm Wednesday, Coddington told city staff, "Event organizers have been in contact with the Spokane Police Department and indicated they are planning a peaceful rally and demonstration. Information about counter-protesters is less specific, but there is nothing to indicated (sic) any concern for violence."

At least one downtown business, Atticus Coffee and Gifts, announced they'd be closing in case of possible protests, noting, "We don’t feel comfortable doing business on a day where our nation’s Capitol is occupied and under siege."

Here are condemnations of the action in D.C. from other Washington and Idaho Congress members:


I wholeheartedly condemn this violence. This is not who we are, and this needs to stop immediately.

The violence we are seeing at the Capitol is wholly unacceptable. It must be stopped immediately and all perpetrators prosecuted to the fullest extent of the law. God bless the Capitol Police, National Guard and other law enforcement on the scene here and at other sites.

I can't contain my rage at Donald Trump and Republicans who invited, incited, and fueled this terror. Our country and our democracy will have to recover from these deep wounds—and it won't be easy.

Thanks to everyone for your prayers and thoughts for our safety and for America.

The Capitol has been breached by protesters. President Trump encouraged this violence. He needs to call them off.

Please stay safe if you are in the area.