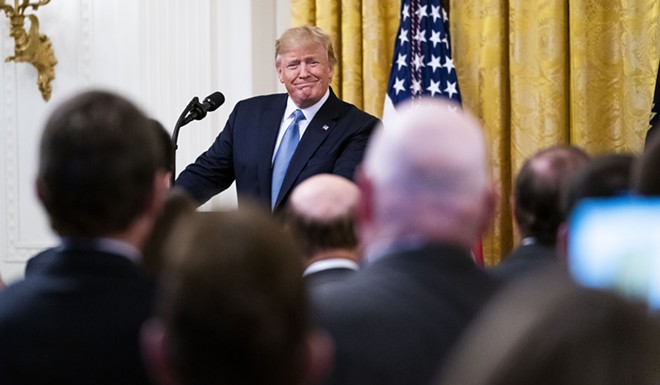 Doug Mills/The New York Times
President Donald Trump delivers a speech at his "America’s Environmental Leadership" event at the White House, in Washington, July 8, 2019. The idea for the speech on Monday originated with consultants on the re-election campaign worried that his environmental record was a turnoff to two key demographics — millennials and suburban women.

WASHINGTON — President Donald Donald Trump has withdrawn the United States from the international Paris climate change accord, sought to roll back or weaken more than 80 environmental regulations and punted on global environmental leadership.

“On the issue of environmental stewardship,” said Douglas Brinkley, a presidential historian, “Trump is seen around the world as a Darth Vader-like figure.”

But on Monday afternoon, Trump delivered a speech billed as “America’s Environmental Leadership.” He was flanked by his two senior environmental officials, one a former lobbyist for the coal industry and the other a former oil lobbyist.

But the idea for the speech did not start with the president. It started after consultants reviewed polling data that showed his environmental record is a turnoff for two key demographics — millennials and suburban women, according to two people familiar with the plans.

In an administration that has often had a muddled approach to policy, both Trump’s allies and his enemies agree that in initiating the rollback of environmental rules he has clearly delivered on his campaign promises. In his speech, Trump trumpeted that rollback as part of what administration officials say is an economy-boosting approach to the environment that could appeal to at least some of the voters unhappy with his record.

In his speech, Trump also lauded the fact that the United States’ greenhouse gas emissions have dropped about 10% in recent years. But that drop is largely due to market shifts leading to an increase in the use of natural gas, which produces about half the greenhouse gas pollution of coal. Under Trump’s policies, which are intended to promote the use of more polluting coal, those emissions are now expected to rise.

“These steps to support coal-based power in fact run in the opposite direction of the cause of climate change,” said Richard Newell, the president of Resources for the Future, a nonprofit, nonpartisan environmental research organization in Washington.

“It is disingenuous to both celebrate the decline in U.S. CO2 emissions at the same time that one promotes the use of coal power,” he said. “You can’t have both.”