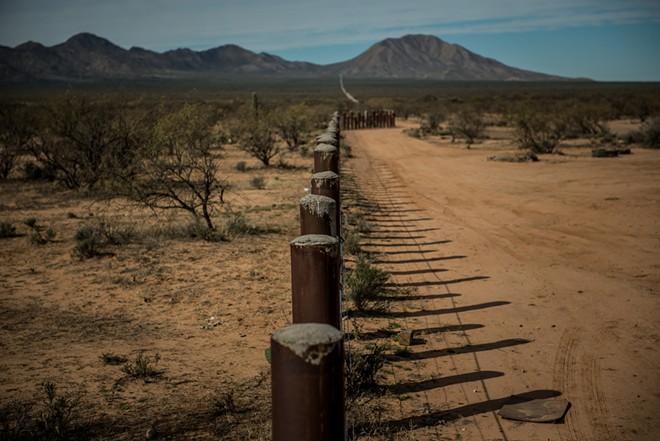 Meridith Kohut/The New York Times
The border between the United States and Mexico is demarcated by posts in the Tohono O’odham nation in Arizona, Jan. 21, 2019. The president has repeatedly suggested during meetings on immigration policy that aides “take the land” and “get it done,” according to a person who has heard him say it.
By Katie Rogers and Zolan Kanno-Youngs
The New York Times Company

WASHINGTON — President Donald Trump’s signature campaign promise to build a wall along the southwestern border is far behind schedule. So he has told his aides to get the job done by whatever means necessary, including by seizing land on the Mexican frontier.

The president has repeatedly suggested during meetings on immigration policy that aides “take the land” and “get it done,” according to a person who has heard him say it. The Washington Post first reported that Trump had brought up the land seizures and had floated the idea of offering pardons to aides willing to break the law, a suggestion he has made before when exploring ways to fulfill his campaign promises.

On Wednesday, a senior administration official did not deny that Trump had made the comments but said that the president had been joking — “he winks when he does it,” that person said.

Inside the White House, his aides say the president is doing what he can to deliver on the promise and quickly. In a statement, Hogan Gidley, a deputy White House spokesman, said the account amounted to “more false fabrications by people who hate the fact the status quo, that has crippled this country for decades, is finally changing as President Trump is moving quicker than anyone in history to build the wall, secure the border and enact the very immigration policies the American people voted for.”

Despite promising to complete 500 miles of border wall in his first term, U.S. Army Corps of Engineers and private contractors have constructed just 60 miles of vehicle barriers or replacement fencing where existing impediments had been damaged, according to a Customs and Border Protection document.

Democrats in Washington have targeted the administration’s efforts to transfer more resources to the southwestern border. On Tuesday, they assailed the Department of Homeland Security for transferring more than $150 million from the Federal Emergency Management Agency disaster relief fund to pay for temporary immigration courts at the southwest border.

“Stealing from appropriated funds is always unacceptable, but to pick the pockets of disaster relief funding in order to fund an appalling, inhumane family incarceration plan is staggering,” Nancy Pelosi, the House speaker, said in a statement, “and to do so on the eve of hurricane season is stunningly reckless.”