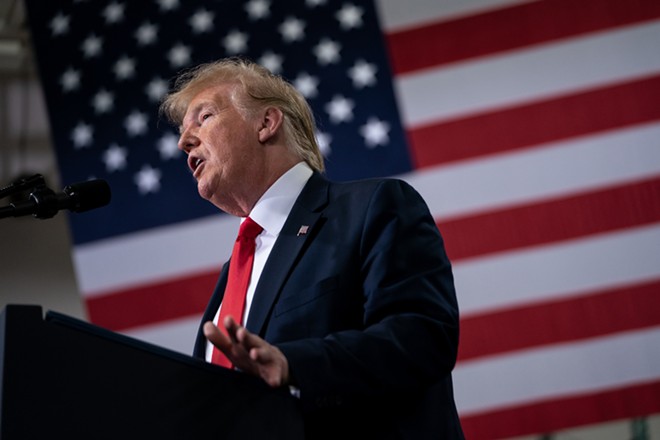 Erin Schaff/The New York Times
President Donald Trump speaks during an event at a subsidiary of Lockheed Martin in Milwaukee, July 12, 2019. Trump weighed in via Twitter on the friction between a group of four freshman Democratic congresswomen and House Speaker Nancy Pelosi on July 14 by suggesting that the congresswomen — none of whom are white — should “go back and help fix” the countries they came from.

By Katie Rogers and Nicholas Fandos


WASHINGTON — President Donald Trump on Sunday weighed in on the friction between a group of four freshman Democratic congresswomen and Speaker Nancy Pelosi: He suggested that the congresswomen — none of whom are white — should “go back and help fix” the countries they came from. His message was immediately seized upon by Democrats, who called it a racist trope.


“So interesting to see ‘Progressive’ Democrat Congresswomen, who originally came from countries whose governments are a complete and total catastrophe, the worst, most corrupt and inept anywhere in the world (if they even have a functioning government at all), now loudly and viciously telling the people of the United States, the greatest and most powerful Nation on earth, how our government is to be run,” Trump wrote on Twitter.

He added: “Why don’t they go back and help fix the totally broken and crime infested places from which they came. Then come back and show us how it is done.”

Broadly, Trump’s attack was meant for members of the so-called squad, a group engaged in an existential and generational war of words with Pelosi: Alexandria Ocasio-Cortez of New York, Ilhan Omar of Minnesota, Rashida Tlaib of Michigan and Ayanna S. Pressley of Massachusetts.

“These places need your help badly, you can’t leave fast enough,” Trump said. “I’m sure that Nancy Pelosi would be very happy to quickly work out free travel arrangements!”

Only one of the women, Omar, who is from Somalia, was born outside the United States. Ocasio-Cortez was born in the Bronx to parents of Puerto Rican descent. Pressley, who is black, was born in Cincinnati and raised in Chicago. And Tlaib was born in Detroit to Palestinian immigrants.

“Mr. President,” Ocasio-Cortez responded on Twitter, “the country I ‘come from,’ & the country we all swear to, is the United States. But given how you’ve destroyed our border with inhumane camps, all at a benefit to you & the corps who profit off them, you are absolutely right about the corruption laid at your feet.”