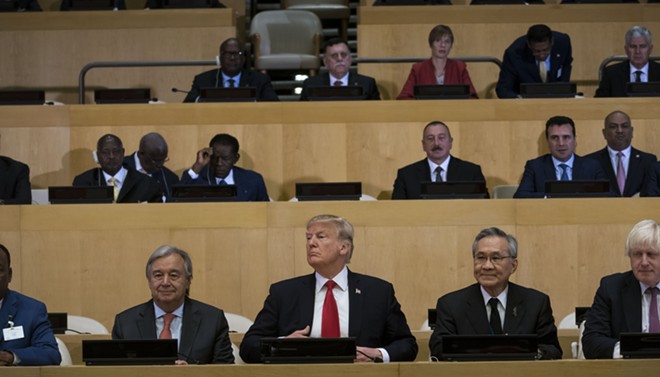 
NEW YORK — If the United States is “forced to defend itself and its allies, we will have no choice but to totally destroy North Korea,” President Donald Trump told the United Nations General Assembly on Tuesday.


In his first address to the General Assembly, Trump denounced North Korea and its leader, Kim Jong Un, saying the nation “threatens the entire world with unthinkable loss of life” as a result of its nuclear weapons program.

“If the righteous many don’t confront the wicked few, then evil will triumph,” he said.

Trump emphasized that it was against the interest of the entire world for North Korea — which he called a “band of criminals” — to obtain missiles and nuclear weapons.

“Rocket man is on a suicide mission for himself,” he said of Kim.

But the president also said America would act alone if needed. He emphasized an “America first” agenda, and said that while the United States would “forever be a great friend to the world and especially to its allies,” his primary responsibility was to Americans.

“All responsible leaders have an obligation to serve their own citizens,” Trump said. “Our government’s first duty is to its people.”

After condemning North Korea, Trump pivoted to the next “rogue nation” — Iran.

He slammed the Iran nuclear deal, calling it “an embarrassment” and one of the worst that the United States has ever entered into.

Trump has long portrayed Iran as a sponsor of terrorism and has suggested that the United States may abandon the 2015 deal negotiated by the Obama administration and five other major powers that limited Iran’s nuclear activities. So far Trump has grudgingly accepted the nuclear agreement despite having described it as a disgrace.

The world’s nuclear inspectors recently declared that inspections found no evidence that Iran is breaching the agreement. A meeting of the parties that negotiated the deal with Iran — Britain, China, France, Germany, Russia and the United States — will take place on the sidelines of the General Assembly on Wednesday.