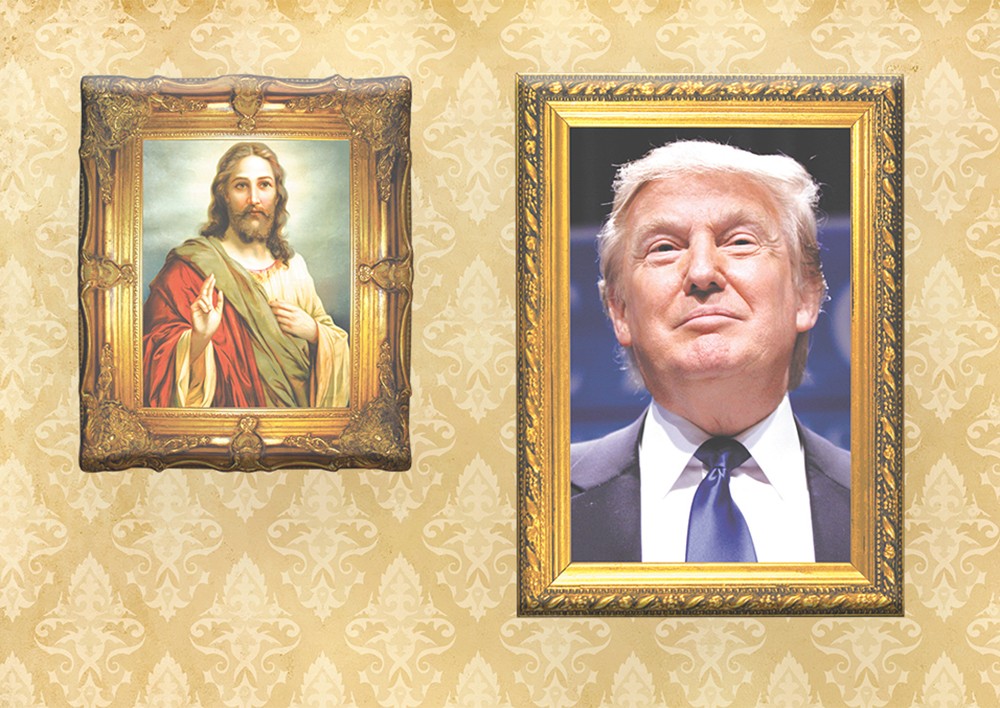 This was the year Dad finally lost his faith.

Not his faith in Jesus, mind you, but what faith he had left in the Republican Party.

Dad's never voted for a Democrat for president in his life. Time after time, he's shrugged off the parts of the Republican Party he hasn't liked — the fearmongering, the anti-immigrant posturing, the obsession with absolute gun rights — because of other pieces of their platform.

But he can't shrug off Trump. Neither can Mom. Neither can my grandparents. They've been reliable Republican voters, year after year, but can't vote for Donald J. Trump as president.

And the reason they can't is largely the same reason that had them voting Republican in the first place: their faith.

I'm sitting at the kitchen table

in my parents' house in North Spokane, site of two decades of prayer before dinner, political debates during dinner, and Bible studies after dinner. The politics were academic. But the religion — they took nothing more seriously.

Dad's a science teacher who's longed to be a pastor. I'd walk out from my bedroom on early mornings and see Dad with his face down in our old gray couch, Bible at his side, praying with, well, religious fervor. He would get so emotional preaching guest sermons at church — especially when he talked about how much he loved his family — tears would stream down at the pulpit.

It's this faith that's animated their opposition to casinos, to premarital sex, to gay marriage, and — most of all — to abortion. Mom and Dad used to take us kids, carried in strollers and on shoulders, to march through the snowy Spokane streets, protesting the anniversary of Roe v. Wade.

And that issue, more than taxes or property rights or defense spending, is why they've voted Republican.

So this is what it means when my parents won't support Trump: They know that Hillary Clinton will appoint a Supreme Court justice — or two or three — who will make rulings that they'll oppose. They know that Clinton has promised to always stand with Planned Parenthood, the organization that performs more than 300,000 abortions a year. They know Clinton is the first candidate in history who's called to repeal the Hyde Amendment, which restricts federal funding for abortion.

On the other hand, Mom says at the kitchen table, Clinton "would not cause people to have a nuclear war." And Trump has praised Planned Parenthood in this election too.

Dad, a former high-school track coach, says he wouldn't hire Trump as an assistant coach, much less a president. Dad says he sees Trump as the living embodiment of a liberal caricature of Republicans as ignorant and racist. Dad's voice lowers into an imitation of a cigar-chomping police chief: "He's a loose cannon!"

Mom chimes in, calling Trump a "chameleon" and a "proud womanizer," and a "toddler who just temper-tantrums." As she finishes drying the dishes, she talks about how Trump's drumbeat for deportation and a wall on the Mexican border seems un-Christian and un-American.

"'Bring me your huddled masses' and whatever," she says. "The whole thing about a 'wall' going up is abhorrent to me. ... I feel like it's a part of the Christian faith: helping the poor or the foreigner. That's my thought."

It was their church, after all, that encouraged them to get deeply involved helping local refugee families. So when Trump paints visions of refugees as terrorists, they think of the Burundi refugee who lived in their house for a month while going through a crisis. They think of the refugee babies they've held in their arms during worship services.

"You've got to be careful to not lose all your judgment in the quest to defeat your enemy," he says.

This insight comes from Bonhoeffer: Pastor, Martyr, Prophet, Spy, the biography of the Lutheran pastor who tried to assassinate Hitler. He gave me the book for Christmas a few years ago. He took me to see the author — Christian talk radio host Eric Metaxas — at an anti-abortion fundraiser at Life Center.

Metaxas has now joined the growing list of Christian stars who've endorsed Trump. Sure, Trump has his "foibles, peccadilloes and metaphorical warts," Metaxas argued, but was the "last best hope of keeping America from sliding into oblivion, the tank, the abyss, the dustbin of history."

"It still disturbs me greatly," Dad says about Metaxas' endorsement. "Where's the discernment?"

But a lot of his fellow Christians feel that way. He used to go to church with Nancy McLaughlin, a former city councilwoman turned Republican county commissioner. And, yes, she's voting for Trump.

If God could use King David, a murderer and adulterer, she argues, he could certainly use a flawed man like Trump. "By not voting [for the lesser evil] you are essentially voting for the more evil," McLaughlin says.

Trouble is, Dad doesn't necessarily see Trump as the lesser evil. He agrees with Southern Baptist leader Russell Moore, who argues that the pro-life movement can't succeed by allying with a misogynist who pushes for "torture and murder of innocent non-combatants."

Trump responded to Moore on Twitter with his characteristic diplomacy: "Nasty guy with no heart!"

with how to respond to the Trump crisis. Finally, around May, he decided to do what he'd never done: Pen a letter to U.S. Rep. Cathy McMorris Rodgers and beg her not to endorse Trump.

The same day, he learned that his wife had already written McMorris Rodgers her own letter.

Maybe, he wrote to McMorris Rodgers, that was a sign.

"I took that as a confirmation that perhaps the Lord was speaking to us," he wrote.

Dad's letter was uncharacteristically fiery, filled with the sort of scathing language he'd never used to describe Bill Clinton or Barack Obama. He called Trump a "a narcissistic, unprincipled, rude and vile man."

"My faith and conviction will not allow me to support Donald Trump, nor will I support anyone else who lacks either the integrity or the courage to stand up to him," Dad wrote.

He called it a crucial moral test for all Republican leaders.

"Are they going to bow down in allegiance to the Republican Party and support a man who defiles all that decent people hold dear?" he wrote. "Or are they going to have the courage to call out the 'wolf' who masquerades in a torn and threadbare costume of wool?"

The letters didn't persuade McMorris Rodgers, of course. A few weeks later, she wrote a long Facebook status update explaining why she was reluctantly supporting Trump.

Like Trump voters, Dad has the sense that something has been lost in today's culture, though he says his reaction is more grief than anger. In his letter to McMorris Rodgers, he quoted Isaiah 59: "the truth has fallen in the streets."

He's long felt that America has become unmoored from Christian values, but he was still surprised to see how quickly Republicans had lined up for Trump.

"I couldn't fathom how there could be so many people who would not see what I'm seeing," he tells me.

As I head out the door to return home, Dad admits something huge: Given a choice between Clinton, Trump and a third term of the president he'd always voted against, he'd take Barack Obama in an instant.

"I'm shocked at even the thought I would do that," he laughs.

Because, for all he disliked about his decisions, Dad has concluded that Obama is a good person. No matter who wins, he's going to miss that. ♦