The president has boxed himself in on Russia

It was all so predictable.

As the Russian noose tightens around President Trump's administration, we knew that he'd revert to form and haul out his usual offensive strategies — obfuscation and misdirection, both underwritten by the usual stack of lies and deflections. It's nothing new, just a continuation of his presidential campaign.
click to enlarge

Trump has reverted to this script many times, whether it was dismissing his six bankruptcies, stiffing his workers or the phony Trump "University" (this outrage was so obvious that Trump settled out of court for $25 million — in other words, he was going to lose and possibly face fraud charges, so he cut his losses). It's nothing new.

But his biggest lie, the one he continued to use, almost in the form of a barrage, over a five-year period? That was the lie that President Obama wasn't born in America, which, according to a recent poll, 49 percent of Republicans still believe. Oh yes, we mustn't forget all the orchestrated chanting from his adoring base: "Lock her up! Lock her up!" was his favorite.

Along the way, a compliant, money-driven press let him off the hook

time after time — for not releasing his tax returns (something that all other recent presidential candidates have provided), blatant misogyny (an example of which was actually caught on tape, then followed up by women who accused him of harassment or worse), his Peeping Tom routine at his Miss USA pageant. And on and on.

Once in office, we suspected that if cornered for any reason, he would go back on the attack — and he has. He now demands that the Justice Department investigate Hillary Clinton again (by the way, this pressure does violence to our tradition of judicial independence). Whatever happens, his ultimate fallback, of course, will remain denial — "Fake news!"

He learned this strategy to always stay on the attack, and to never concede anything or apologize, from the late Roy Cohn, Joseph McCarthy's chief legal henchman. Cohn went after homosexuals in the State Department when he himself was gay — he would die of AIDS, in fact. Cohn served as a kind of dirty-deeds mentor to Trump.

Now Trump's target du jour is Attorney General Jeff Sessions, if the Senate doesn't nail him first. Our senators don't agree on much these days, but neither side of the aisle likes being lied to, which Sessions has done several times now. 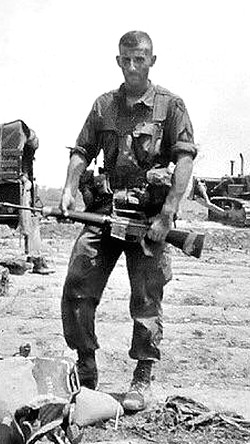 2nd Lieutenant Robert S. Mueller III of the 3rd Marine Division in Vietnam, 1969; he won a Purple Heart and a Bronze Star, among other military honors.

So for the sake of argument, let's assume Sessions leaves. This would allow Trump to go directly after his real nemesis, Robert Mueller. If Trump follows the formal process, he likely would order his Deputy Attorney General to fire Mueller. That would be Rod Rosenstein. But Rosenstein is the very person who hired Mueller and drafted his mission, which is to investigate any links between Russia and the Trump campaign. His charge extends to "prosecuting any and all associated." Well, Mueller is doing exactly what he was tasked to do, and by all accounts, doing it carefully and effectively.

Trump's staff says the president has no plans to fire Mueller,

but my guess is if the trail leads Mueller to Trump's family business dealings, where the real Russian dirt is likely to be found, we'd best rig for heavy weather.

Let's say that Rosenstein refuses to move on Mueller and is also fired by Trump. Should this happen, Trump would likely just move down the chain of command; we've seen this play before, with Richard Nixon during Watergate. Any version of the above, says Sen. Lindsey Graham, another Republican, would result in "holy hell to pay." (Note it was another Republican, Barry Goldwater, who went to the White House in August 1974 and told Nixon that the jig was up.)

And Trump in these circumstances? Who knows? Some predict that he would just resign and head to his home away from home — the golf course. But suppose Mueller gets on to something much broader and deeper, something that might not allow Trump off the hook just by resigning. In that case, Mike Pence could pull a Gerald Ford and just pardon Trump — and maybe his entire family. Ford let Nixon off just this same hook, then lost the 1976 election.

In any case, should things come down to this scenario, my guess is that optics will kick in as never before. It'll be Trump vs. Mueller. The differences are stark. Compare any photos you've seen of Trump — take your pick — with just a single photo of 2nd Marine Lieutenant Robert Mueller serving his country in Vietnam. Who wins that optics battle? Who will America trust? ♦