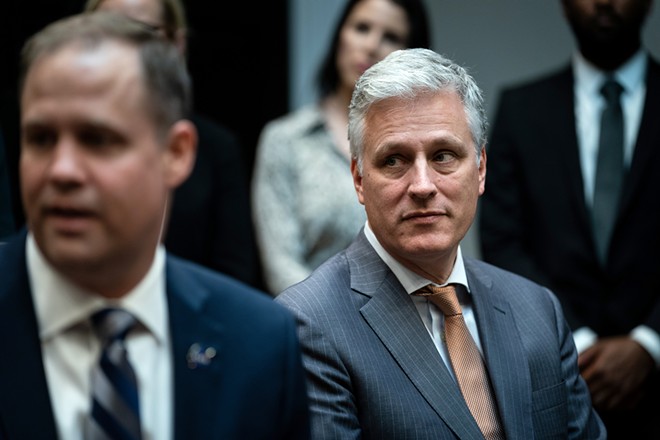 The administration said that O’Brien, 54, “has mild symptoms” and is working remotely from “a secure location off site.”

“There is no risk of exposure to the president or the vice president,” it said.

O’Brien is the most senior White House official known to have contracted the virus. He typically works from a West Wing office just steps away from the Oval Office and, under normal circumstances, may see the president several times a day.

It is unclear when he was last in physical contact with Trump, although he joined the president on a July 10 trip to Florida.

Speaking to reporters before departing the White House on Monday afternoon, Trump said he had heard about O’Brien but did not know when he had tested positive. “I haven’t seen him lately,” the president added.

O’Brien also traveled to Paris in mid-July, where he met with several European security officials, visited a U.S. war cemetery and attended a Bastille Day celebration. It was unclear whether had become infected before or after that trip. The White House statement did not provide further details.

A photograph of O’Brien in Paris with his counterparts from Britain, France, Germany and Italy shows the men standing nearly shoulder to shoulder without masks, and O’Brien and others are not wearing masks in images of his ceremonial stops released by the White House.

Speaking to reporters at the White House on Monday, Larry Kudlow, Trump’s top economic adviser, said O’Brien believed he contracted the virus from his daughter.

Senior White House aides are tested regularly for the virus, as is Trump.

O’Brien assumed his job in September, succeeding John Bolton, who resigned after mounting conflicts with the president over foreign policy.

Trump Floats Whether to ‘Delay the Election,’ Something He Cannot Legally Do

Netflix smashed the record for most Emmy nominations of any network, studio or streaming service with 160