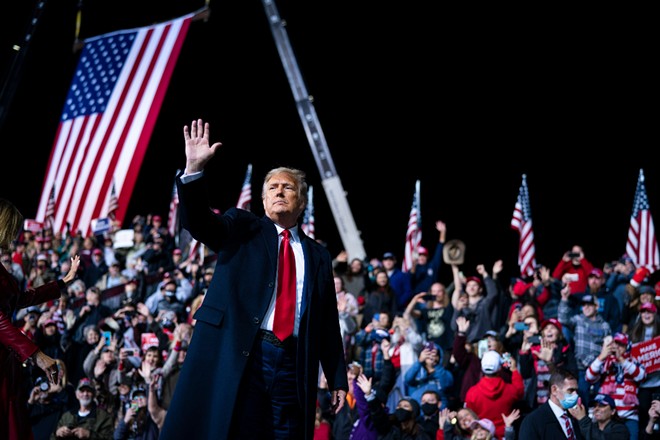 Doug Mills/The New York Times
President Donald Trump at a campaign event on behalf of Georgia's then Republican senators, Kelly Loeffler and David Perdue, at an airport in Valdosta, Ga., Dec. 5, 2020. Trump and the Republican Party raised $255.4 million in the eight-plus weeks following the Nov. 3 election, new federal filings show, as he sought to undermine and overturn the results with unfounded accusations of fraud.

By Shane Goldmacher and Rachel Shorey
The New York Times


Former President Donald Trump and the Republican Party leveraged false claims of voter fraud and promises to overturn the election to raise more than a quarter-billion dollars in November and December as hundreds of thousands of trusting supporters listened and opened their wallets.

But the Trump campaign spent only a tiny fraction of its haul on lawyers and other legal bills related to those claims. Instead, Trump and the GOP stored away much of the money — $175 million or so — even as they continued to issue breathless, aggressive and often misleading appeals for cash that promised it would help with recounts, the rooting out of election fraud and even the Republican candidates’ chances in the two Senate runoff races in Georgia.

What fraction of the money Trump did spend after the election was plowed mostly into a public-relations campaign and to keep his perpetual fundraising machine whirring, with nearly $50 million going toward online advertising, text-message outreach and a small television ad campaign.

Only about $10 million spent by Trump’s campaign went to actual legal costs, according to an analysis of new Federal Election Commission filings from Nov. 4 through the end of the year.

Far more is now sitting in the coffers of a new political action committee, Save America, that Trump formed after the election and that provides him a fat war chest he can use to pay advisers, fund travel and maintain a political operation. Trump’s new PAC had $31 million in the bank at the end of 2020 and an estimated $40 million more sitting in a shared party account waiting to be transferred into it.

Trump’s extraordinary success raising money came mostly from grassroots and online contributors drawn to his lie that the election result would soon be somehow wiped away. Only about a dozen donors gave $25,000 or more to one of Trump’s committees after Nov. 24. (The lone six-figure donation came from Elaine J. Wold, a major Republican donor in Florida.)

A spokesperson for Trump did not respond to a request for comment.

All told, more than 2 million donations flowed to the former president and his shared committees with the Republican National Committee from Nov. 24 to the end of the year. Trump’s fundraising did stall drastically after the Electoral College certified Joe Biden as the winner on Dec. 14.