Tully, the latest from the director and writer of Juno, is a radical comedy about womanhood 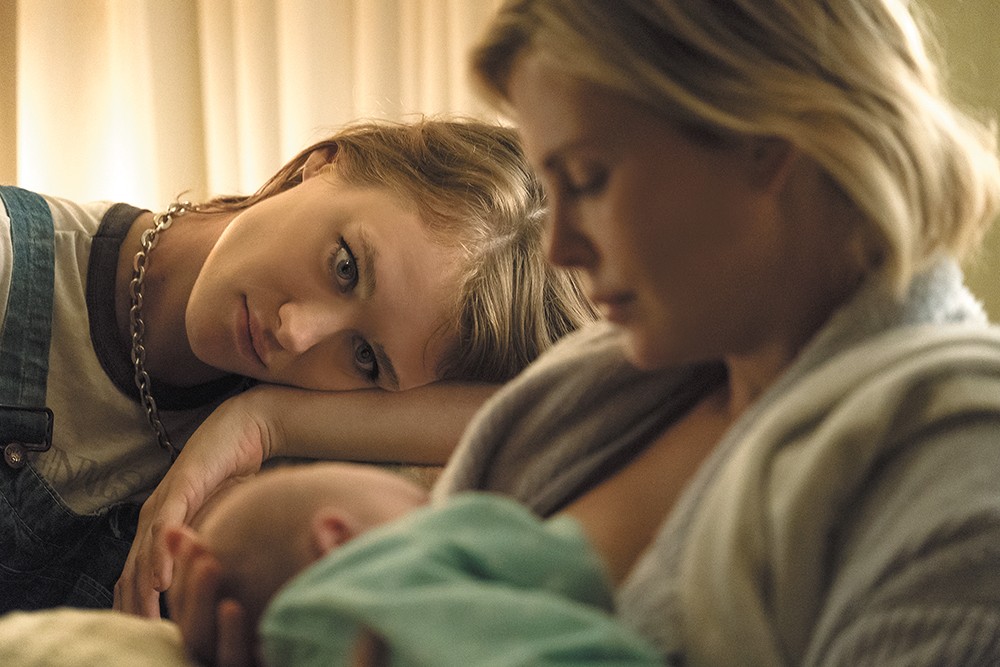 I have no children. I am not a mother. I am perfectly happy with this decision. So when I tell you that Tully moved me profoundly — to laughter and to tears — it has nothing to do with any firsthand experience in that arena, or with any regrets for not having had that experience. I tell you this because Tully isn't about motherhood in the 21st century. It's about womanhood in the 21st century.

Of course Tully does concern motherhood. I don't mean to diminish the incredibly important bravery of this movie in that aspect in any way. We only rarely see movies that deal with the difficult, complicated realities of motherhood — with the physical, emotional and psychological impact that it has on women's bodies and minds — and we have never seen a movie about motherhood like this one. When someone tells the hugely, uncomfortably pregnant Marlo (Charlize Theron) that she's glowing, it lands with all the sincerity of a sappy greeting card. This is a movie that rolls its eyes and barks out snark in the face of all the clichés about motherhood.

Many films in which characters are pregnant look exactly like what has been done to achieve this effect: an extremely thin actress has been fitted with a fake baby belly. For Tully, Theron gained 50 pounds. She looks pregnant, and then she looks like a woman who has just given birth and is too exhausted, mentally and physically, to do a damn thing about "getting into shape." Even more realistically, Theron embodies, in a beautifully worn-out way, Marlo's utter personal devastation.

There's an extraordinary sequence, just after the birth, a montage of night after night of sleep deprivation and of her entire existence, just about, given over to the insistent and never-ending demands of the screaming infant. The baby's bawling cuts right through you. We don't think of a movie like Tully, a small domestic dramedy, as being one in which sound design is essential. But that newborn's crying is as aurally violent as anything you'll hear in a disaster flick or an action movie.

It's after a while of this that Marlo reluctantly accepts the offer of her wealthy brother (Mark Duplass) as a baby present: He'll pay for a "night nanny," who will come in and babysit overnight, so Marlo can sleep, with only brief wakeups for nursing. (Tully is also brutally realistic about breastfeeding. It can be a nasty, messy, painful endeavor for new mothers.) Enter Tully (Mackenzie Davis). She's young, eager, vastly knowledgeable about many things and vastly empathetic to Marlo's predicament.

And this is where Tully becomes all about the condition of women today, and an even more extraordinary cinematic depiction of womanhood... or at least of the big slice of womanhood that is overachieving, fiercely independent — which is true of Marlo even though she is married, to Drew (Ron Livingston) — and proud of her own smarts and abilities. Screenwriter Diablo Cody's brilliantly wise and funny script recognizes how difficult it can be for women like Marlo to accept help, to even admit that they need help. It's tough for women like Marlo to even be kind to themselves. To ourselves.

Tully director Jason Reitman is deeply, intimately sympathetic to Marlo in a way that I have never seen on-screen before when it comes to a female protagonist. But the film is also deeply critical and fully enraged at all the unseen burdens that women place upon themselves, even as it suggests that we are merely getting a jump on those burdens getting loaded on us by the world. Instead of getting angry at how we are never good enough and perfect enough in the eyes of others, we place impossibly high standards and expectations on ourselves.

Tully takes the term "self-care" and tosses it away as another one of those impossible expectations and tells us it's okay to accept help. Which is a very radical thing to say to women. ♦

Tully is not showing in any theaters in the area.