Don’t be alarmed at the eavesdropper at the end of the bar this weekend. That’s just Tim Russell warming up. 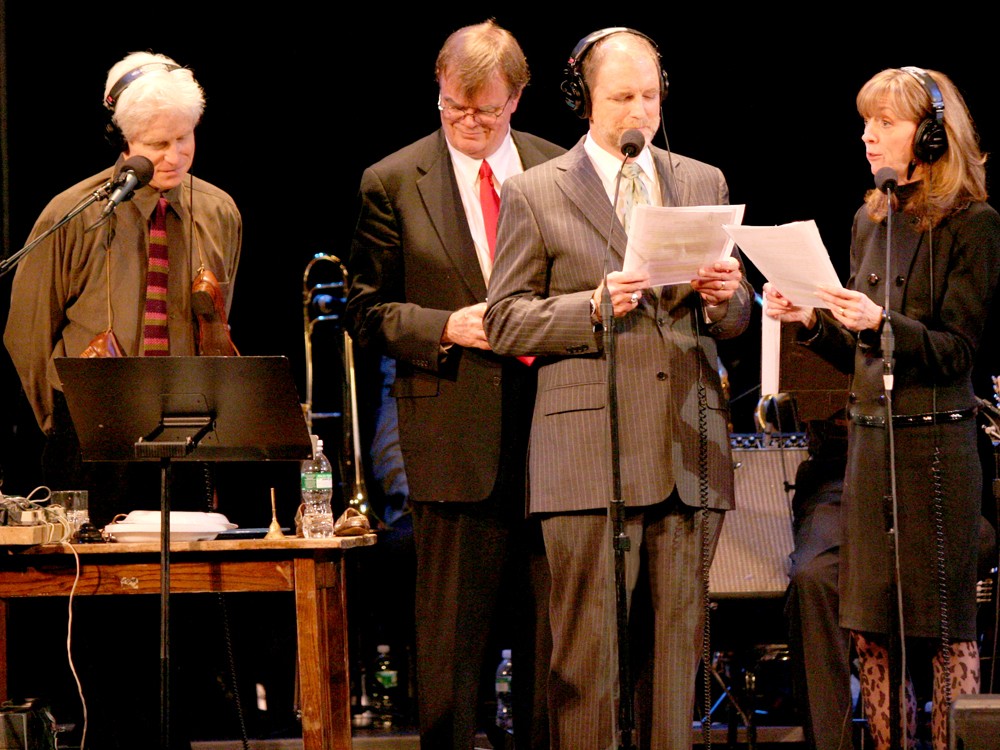 The cast of A Prairie Home Companion, including Tim Russell (third from left)

In the 2008 book, State by State, Philip Connors opens his essay on Minnesota by recalling a trip to a Twins game as a kid. Between innings, his brother goes for an ear of corn, only to find that famed writer Garrison Keillor has just bought the last one. Penning a definitive account of his home state, Connors writes, presents him with a similar conundrum: “I feel a little like Mark did that day: as if I’m standing in line at the sweet corn stand of the Minnesota soul, only to find that Garrison Keillor has been here already and cleaned the joint out.”

Keillor, 68 — novelist, blogger, anachronistic radio celebrity— has been chronicling the people and culture of his native Minnesota through novels and his beloved, fictional “News from Lake Wobegon” radio stories for decades. A gifted wordsmith and a masterly storyteller, he is the driving force behind public radio’s A Prairie Home Companion, which he hosts, live, nearly every weekend. Often, the broadcast emanates from the Fitzgerald Theater in St. Paul. This weekend, however, it will originate from the Spokane Arena (only the second time the cast and crew have hit the Inland Northwest since 1998) as part of KPBX’s 30-year anniversary celebration.

One of Keillor’s traveling cohorts will be veteran Prairie Home Companion voice actor Tim Russell, who plays Dusty in the running “Lives of the Cowboys” portion of the show.

“I’m a big tourist,” Russell says, on the phone from Minnesota.

“I love traveling. I love seeing new cities. I remember last time I was in Spokane, I walked around down by the water, rented a car and went to some mansion up on the hill.”

Russell’s wanderings aren’t all play, though. A radio personality since 1972, he grew up destined, he believed, for the voice-over business. His ear for rhythm and inflection (he’s voiced Arnold Schwarzenegger, John McCain and Barack Obama on APHC) is uncanny. So when he’s touring Glover Mansion or looking for a greasy spoon downtown, he’s not just screwing around — he’s working.

“Generally, there are some local aspects to the script, in ‘Guy Noir’ or ‘The Lives of the Cowboys,’” he says. “You wanna hear what the dialect is sounding like. You just walk around. In New York, you get everything — French, Italian, New Jersey. My ears are always kind of attuned.” He’ll also spend time in museums or local historical societies. “You get engrossed in local history and all the references and pronunciations that might pop up.”

He’ll likely do this on Saturday, the morning after the cast arrives and runs through the scripts for the first time. During that reading, Russell will try to find a voice for the characters Keillor has written. “His writing is good enough that usually you can do that in the first crack,” he says. “Every once in a while, he’ll have a descriptive phrase, like ‘old,’ or he’ll put ‘Kirk,’ like Kirk Douglas. Of course, not the way he actually sounds, but someone strong and heroic. Or what’s the thing he writes in when he wants a gangster? He’ll put down ‘Rico.’ It could be a Howya doin’? New Jersey thing, or it could be a [rasps] Godfatha thing.”

While Russell is meandering through Spokane on Saturday, then, Keillor will revise the scripts. Then the cast will read them again an hour before the show. Then, Russell says, Keillor will re-write again, revising and revising. “Then sometimes we’ll get an updated script five minutes before the show goes on,” he says. “Or he’ll edit the script on the fly. There’s only about 30 seconds left of whoever’s singing, and we’ll be in the wings, pencil in hand, slash and burn. Sometimes he just says, ‘Follow me.’” The results often pay off. “As a writer, he’s just this incredible sponge,” Russell says of Keillor. “He’s omniscient. He hears and sees everything, and you don’t have a clue. There are times when we’re all having conversations in a van from the airport and that’ll end up in a script.”

That live, on-the-fly, customized aspect is one of the things that keeps the show relevant and engaging, even with radio seeming increasingly dinosauric. “It’s live. It goes out live,” he says.

“That adds to the whole thrill of the viewing audience. They know it’s a live radio show, and it may be reflecting their community. That doesn’t happen too much anymore.”

Of course, the other lasting strength is Keillor’s stories from Lake Wobegon — wistful, curmudgeonly, dysfunctional and imaginative. “[The show] only still exists,” Russell says, modestly, “because of Garrison’s talent and skill and writing ability.”