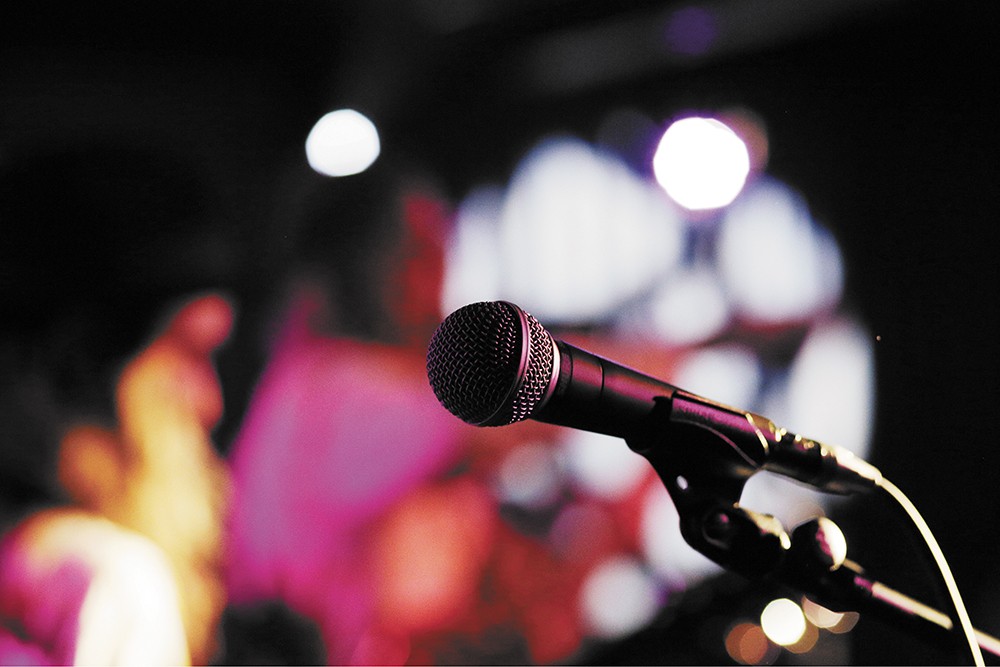 Anyone who has followed Spokane's music scene with any regularity knows how it morphs and changes, ebbs and flows. But it seems that the Inland Northwest has been on an upswing for the last couple years when it comes to music both local and touring, and we're in the middle of a particularly fruitful period.

If you're looking for good live music, you don't have to look very far, and we're breaking down some of the top club-style options by venue.

The premiere all-ages indie venue in town, the Bartlett has become known for its comfortable atmosphere, a great sound system and a full lineup of reliably diverse artists. Their schedule tends toward Americana, folk and indie rock, but they'll also throw in the occasional stand-up comedy or poetry performances. And don't sleep on their monthly jazz and bluegrass showcases, and their popular open mic nights. Big names hitting the Bartlett in the coming months include Portland rockers Summer Cannibals (Sept. 22), singer-songwriter Damien Jurado (Oct. 5) and folk-country faves Carbon Leaf (Oct. 7). 228 W. Sprague, thebartlettspokane.com

ALT-ROCK FOR THE 21-PLUS CROWD

From the same folks that brought you the Bartlett, the Lucky You Lounge in Browne's Addition has only been open since May but has already hosted the likes of Mudhoney, Built to Spill and the Joy Formidable. Alongside a full food menu with vegan options, the venue also boasts a comfy downstairs bar, where it regularly throws free shows and DJ sets. Upcoming artists to look out for: Punk icon Mike Watt (Sept. 25), the alt-country act Son Volt (Oct. 19 and 20), and Spokane native Tyrone Wells (Nov. 15). 1801 W. Sunset, luckyyoulounge.com

If you want to get your headbang on, look no further than the Pin. This downtown all-ages club specializes in acts that aren't afraid to crank it up to 11, booking the crustiest punk, the heaviest metal and even the occasional high school rock band showcase. The venue is also known for hosting monthly drag shows, which put the spotlight on both local drag queens and touring performers. 412 W. Sprague, thepinspokane.com

A LITTLE BIT OF EVERYTHING

The distinctive blue-brick building on the corner of Washington and First has had a long history as a linchpin of Spokane's music scene. In the decade and a half before current owners Dan and Dawson Hoerner took the helm, the Big Dipper had closed and reopened and closed again, and it's now experiencing perhaps its steadiest period of activity. You can expect an eclectic mix of music on any given week — reggae, R&B, rock, pop, jazz and everything else under the sun. The Dipper will also have one of the season's hottest tickets when Pacific Northwest punk legends the Melvins come through on Sept. 15. 171 S. Washington, bigdipperevents.com

For the times when you have no choice but to boot, scoot and boogie, this spacious, weekend-only country bar out on the Idaho state line is the place to go when you need to brush the dust off those old cowboy boots. Co-owned by bona fide Nashville songwriter and performer Jeremy McComb, the Ville (as its referred to by its regulars) is a massive space, meaning it's perfect for line dancing. Fridays are ladies nights, and Saturdays often feature live honky-tonk bands you can shuffle to. 6361 W. Seltice Way, Post Falls, thenashvillenorth.com

Most dance clubs have DJs that are happy to play all the latest Top 40 hits, but nYne is the place to be if you really, seriously want to get down at the end of the night. On Fridays and Saturdays, the LGBTQ-friendly bar fills up with people from all walks of life, and a rotating roster of DJs spin eclectic playlists of pop hits and classic tunes. After a night of bar-hopping, it's the place to get your groove on before finally Lyfting home. 232 W. Sprague, nynebar.com 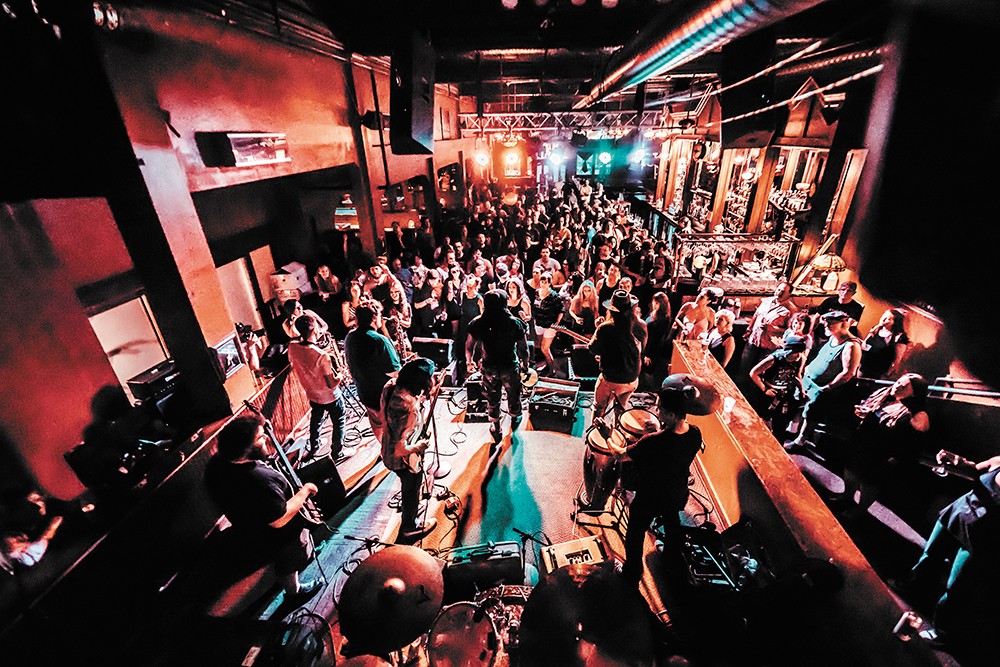 House of Soul, Red Room Lounge and the Hive

One of Spokane's newest venues, House of Soul (25 E. Lincoln) is a haven for anyone who likes their music of the old-school variety. They host weekly jam sessions and feature the Motown revue stylings of in-house band Nu Jack City, and have hosted touring acts that have included tributes to Earth, Wind & Fire and Prince. Red Room Lounge (521 W. Sprague), meanwhile, is more of a downtown mainstay, and their schedule is heavy with hip-hop, R&B, reggae and even the occasional EDM night. They're also known for their weekly open mics on Mondays and jam nights on Wednesdays, both hosted by local musician Lucas Brookbank Brown. And if you happen to find yourself in Sandpoint, check the schedule for the Hive (207 N. First), a recently renovated night spot that specializes in funk, R&B and jam bands. 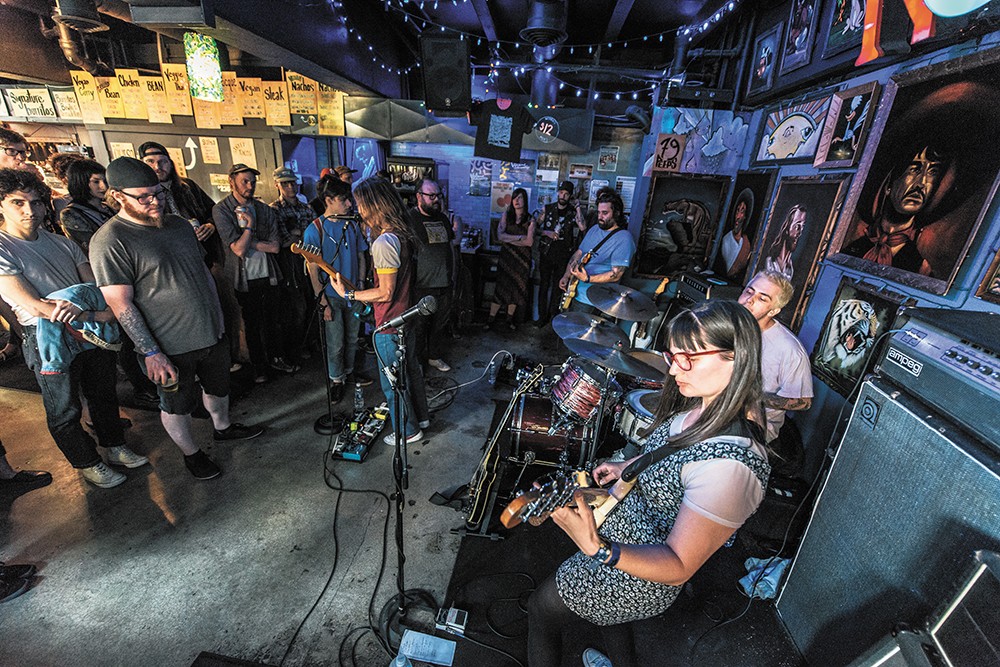 Although these places are first and foremost bars and/or restaurants, it's not unusual to wander in and stumble upon an awesome, down-and-dirty rock band you've never heard of letting loose in the corner. Baby Bar (827 W. First) often hosts DIY shows in its attached Neato Burrito fast-casual restaurant, while the Browne's Addition staple Pacific Pizza (2001 W. Pacific) serves hot-and-ready slices along with local rock 'n' roll every weekend. And Berserk (125 S. Stevens), one of downtown's newest bars, throws the occasional live show and hosts a vinyl-spinning night every Thursday.