TV at the Movies

The familiar Penguins of Madagascar takes to the big screen 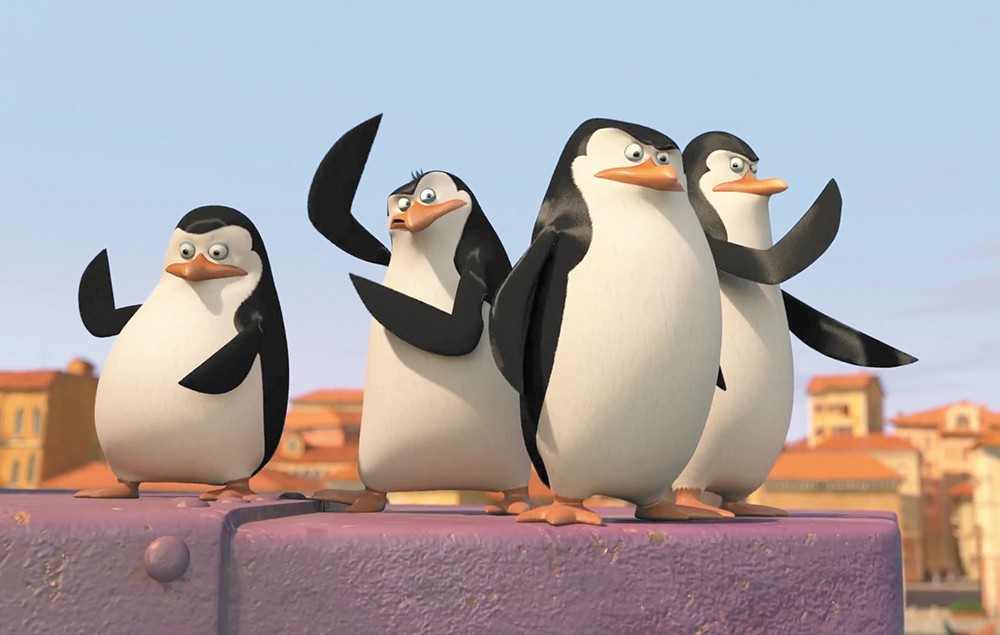 What's black and white and, at first, a bit of a blur?

That'd be the penguin leads of this latest feature from DreamWorks Animation. Regular viewers of the Emmy Award-winning Nickelodeon series The Penguins of Madagascar — a spin-off of 2005's Madagascar, which also spawned two film sequels — should have no problem identifying old friends. But unless you're especially sensitive to height or a signature hair tuft, the newcomer may have some trouble telling Skipper from Rico from Kowalski, all introduced (as their younger selves) amidst a whirr of droll dialogue, acrobatic action, and an inspired cameo from Werner Herzog.

Does it matter? You get the drift. Voiced by Tom McGrath (co-director of the Madagascar series), Skipper is the leader of a ragtag group of amateur secret agents. Kowalski (Chris Miller) is the brains, while wild-eyed Rico (Conrad Vernon) boasts a special weapon in his propulsive powers of regurgitation. Young Private (Christopher Knights) is the foundling they meet at the film's beginning and coddle like a little brother, but Private wants to be taken seriously now.

And these are serious (OK, seriously silly) times, what with a mad octopus named Dave (John Malkovich) determined to wipe out the world's penguin population. Skipper's unit is on the case, but another, more elite organization called the North Wind has dibs; it's led by Benedict Cumberbatch's supercilious, espresso-drinking wolf dubbed "Classified" and includes a sexpot owl named Eva — disappointingly, the lone female in the film.

That is perhaps too many words dispatched on a plot that's hardly the point. A merry entertainment with no pretense of greatness, Penguins of Madagascar is all about antics, verbal and visual. A common complaint of modern animated films is that the comedy tries too hard to be adult; arguably, the Penguins script (by John Aboud, Michael Colton, and Brandon Sawyer) tilts too near "Dad humor" (oy, these puns). But the film moves so fast, failed jokes are forgotten easily, and its commitment to daffiness strikes the right chord. And, oh yes: Even computer-generated penguins really are just the cutest. ♦

Penguins of Madagascar is not showing in any theaters in the area.

A musical ray of sunshine during the pandemic: X has a new album out today

Campuses may be closed, but you can recreate the college experience from your couch