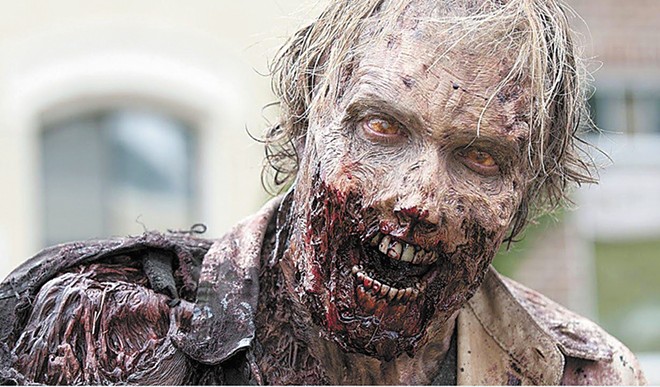 Will Fear the Walking Dead get as gory as the original?

is almost certainly going to be a commercial success, mostly because it shares 75 percent of its name with the highest-rated program in the history of cable television. It will be around for a while, whether you like it or not; a spin-off for AMC's ratings behemoth makes obvious business sense, but there's a good argument that a companion to TWD is almost necessary for some curious fans.

A lot of us want to know how the hell this zombie disease was able to spread so fast and then, apparently, infect everyone on the planet, thus reanimating the corpses of the recently deceased. We hope that Fear (9 pm Sundays on AMC) will do that, though the pilot, at least, doesn't guarantee that we'll get any relief to our pseudo-scientific curiosity. But we can still hope.

Fear, created by TWD's Robert Kirkman and Sons of Anarchy producer Dave Erickson, opens in present-day Los Angeles with heroin addict Nick (a very Johnny Depp-looking Frank Dillane) waking up in a decrepit church to find his zombified girlfriend eating the face off of another junkie. He runs out into the street, understandably terrified, and gets hit by a car.

From there, the milieu of this first episode is more CBS procedural drama than what we've come to expect from Kirkman's blood-dark series. Nick's guidance counselor mom (Kim Dickens) and her teacher boyfriend (Cliff Curtis) come to the hospital, along with Nick's overachieving high school senior daughter (Alycia Debnam-Carey), giving us the sort of foundational family backstory TWD has seemed to make up on the fly over the course of its run.

There are whispers about some mysterious illness spreading through the country, but most of the focus is on the characters' non-zombie-apocalypse problems, which, again, is a refreshing change. But then the action accelerates as weird things start happening across L.A.