Rugrats get in the spirit.

Like a lot of latchkey kids, my siblings and I grew up on a steady diet of cartoons. During the pandemic, I've gone back to a lot of the shows we used to love and been surprised how well they hold up. I can trace so much of my taste now back to those early, absurd exercises in color, imagination and condensed storytelling. (I'm pretty sure I became a socialist from the ant rebellion in A Bug's Life.)

We were a decidedly unreligious household. When the holidays rolled around, we took the time off school to drink hot chocolate and bake cookies, but were more likely to watch A Nightmare Before Christmas than It's a Wonderful Life. Still, December is a rich time of year for TV specials, whatever your affiliation or non-affiliation with a particular holiday.

So, whether you're looking for something to watch with your family or simply to entertain your inner child, here are six suggestions for wintry, holiday-themed TV.

From the '90s to early 2000s, Nickelodeon aired nine excellent seasons following the zany lives of babies. In this special, main character Tommy Pickles learns about Hanukkah the hard way.


Since Tommy and all his friends are still acquiring language, they mishear his grandpa and think he's participating in a play called "The Meanie of Hanukkah" instead of "The Meaning of Hanukkah." Like any responsible grandchild, he sets out to save his family from what he imagines is a giant, adult-sized bully just like the mean kids at day care. Other tough lessons include: dreidels are not edible, latkes are not ordinary pancakes, and the menorah is not a bunch of birthday candles. (Streaming on Hulu).

When I forced him to watch this show for the first time, my partner said, "This is like a really dark Looney Tunes." If you have never experienced Courage the Cowardly Dog, and you care about cartoons at all, YOU MUST.


The show's only attempt at a Christmas episode, "The Nutcracker," is about what you'd expect from a series about an anxious pink dog who constantly protects his owners from bizarre and terrifying situations. In this one, his love for Miriam leads him to a ballet dance-off against giant rats in a junkyard. (Streaming on Amazon Prime) 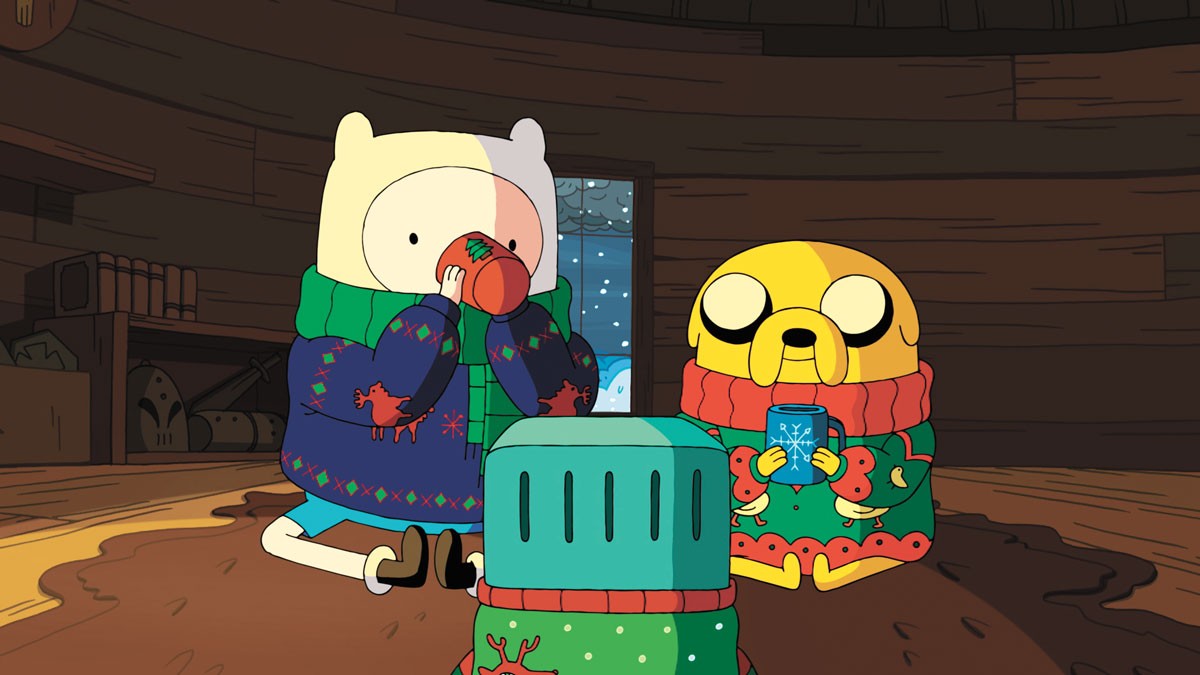 Adventure Time is pure imagination candy, and its holiday special is no different. Originally conceived as a chance for protagonists Finn and Jake to provide commentary to actual Christmas movies, this special instead gives a backstory of the show's antagonist, the Ice King.

If you haven't seen any of the show and want to dive into this, all you really need to know is that the Ice King is a bad guy who lives with a lot of penguins in the Ice Kingdom. In these episodes, Finn and Jake unearth his secret video diary and start to learn answers to questions about him they've never asked. (Streaming on Hulu)

Good news: The early 2000s masterpiece has been picked up for a continuation, The Proud Family: Louder and Prouder. If you're preparing for the release, consider refreshing your memory with the first season's excellent Kwanzaa special.


While Christmas shopping, the Prouds meet a homeless family. When they invite them over for dinner, they don't expect them to stay for seven days, teaching them valuable (and hilarious) lessons about materialism, generosity and heritage. (Streaming on Disney+)

Over the Garden Wall

Sometimes, Halloween just needs to last longer. If Christmas decorations make you miss cobwebs, you'll definitely want to check out Over the Garden Wall, whether you have children or not.


The miniseries follows two half-brothers lost in a strange forest as they try to find their way home. Binge this for bizarre trials, hauntingly catchy musical arrangements, gothic mansions, and windswept stories of friendship and perseverance. (Streaming on Amazon Prime)

The Chilling Adventures of Sabrina

"A Midwinter's Tale," The Chilling Adventures of Sabrina (Season 1, Episode 11)

Okay, so this one isn't a cartoon, but it is based on the Archie Comics series Sabrina the Teenage Witch. If your kids are a bit older and disenchanted with heartwarming story arcs, they might enjoy this very nontraditional holiday special.


Half-witch and half-human, Sabrina Spellman struggles with the darker parts of her family's identity while attending high school. In this episode, the Spellman family's celebration of the Winter Solstice is interrupted by a seance gone awry. (Streaming on Netflix) ♦

The original print version of this article was headlined "'Tis What Season?"