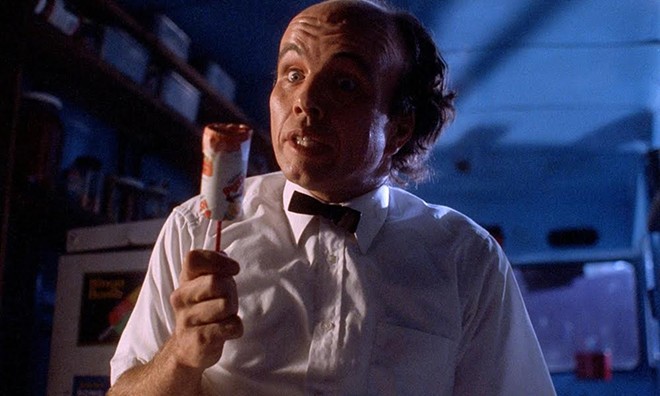 Everyone talks up the ’80s as the golden age of horror movies, but the ’90s? More like a golden shower. Aside from Leprechaun (Jennifer Aniston’s finest hour), 1990-99 was a bust for scary flicks; scraping together a decade-encompassing list would be a fool’s errand.

None of these 13 ‘90s movies would be considered High Art and, tellingly, few of them are even available on proper streaming services (at least not for free). Grab a Zima and some 3D Doritos and prepare to be underwhelmed (though there are some accidental gems).

Highway to Hell (1992; Prime Video)
Lovebirds Rachel (Kristy Swanson) and Charlie (Chad Lowe) are en route to get married in Las Vegas when a demonic highway patrol cop kidnaps Rachel and drags her to Hell to become a bride of Satan. Charlie follows, encountering Hell-dwellers like Lita Ford, Ben Stiller, and Gilbert Gottfried (as—wait for it—Hitler). Highway to Hell is aggressively stupid, but entertaining-ish.

Witchboard 2: The Devil’s Doorway (1993; YouTube)
A young woman (Ami Dolenz) moves into Los Angeles loft, finds a Ouija board, and promptly summons the spirit of the previous tenant, who claims to have been murdered (L.A. real estate is brutal). The spirit then starts unleashing death and destruction whenever the Ouija board is accessed, but do they just stop? Nope. Related: Check out The Social Dilemma on Netflix.

Office Killer (1997; YouTube)
When Dorine’s (Carol Kane) office job at Constant Consumer (ha!) magazine is downsized to a work-from-home gig, she loses it and begins plotting to kill her co-workers (including Molly Ringwald, Jeanne Tripplehorn, and Michael Imperioli) and bring their bodies home for company. Could this be any timelier, 23 years later in 2020? Working from home sucks that much.

Full Eclipse (1993; YouTube)
“There’s a new police force on the streets … and they only come out at night.” Rave cops? Nope: There’s a vigilante subsect within the LAPD made up of genetically-enhanced werewolves—and Det. Max Dire (Mario Van Peebles) has infiltrated their ranks. Aside from some hilariously wolfed-up sex scenes, there’s not much action in Full Eclipse; 2014’s WolfCop did it better.

Death Machine (1994; Prime Video, YouTube)
Set in the far-flung future of 2003, Death Machine is essentially RoboCop with a lobotomy. Genius cyborg engineer Jack (Brad Dourif) is out for revenge against the corporation that fired him, unleashing his ultimate creation, “Warbeast,” against it (his first project was called … “Hard Man”). Fun fact: Death Machine was Rachel Weisz’s first film role. Well, sad fact for her.

Embrace of the Vampire (1995; Tubi)
Embrace of the Vampire led to the destruction of many a VHS player in the mid-90s, thanks to horndog teens furiously pausing and rewinding the “scandalous” nude sex scenes of Alyssa Milano, sitcom sweetheart (Who’s the Boss?). Here, she’s a college student stalked by a suave vampire (Martin Kemp of Spandau Ballet!); Embrace would be a tame Lifetime movie in 2020.

Bordello of Blood (1996; YouTube)
Between his ’80s stint on Saturday Night Live and his current gig as a Republican-adjacent shill, Dennis Miller starred in this Tales From the Crypt footnote. Miller plays a P.I. out to rescue Corey Feldman from a vampire hooker coven led by supermodel Angie Everhart, which really sounds like Feldman’s element. Saving grace: Music by Anthrax, Thin Lizzy, and Redd Kross.