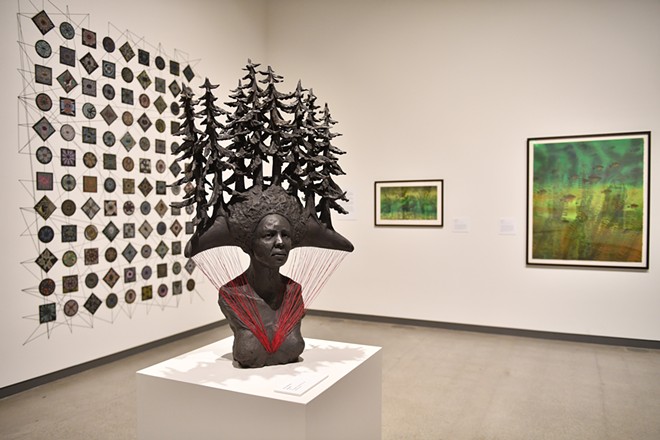 It should be easy to write about the two current exhibitions at Jordan Schnitzer Museum of Art WSU, Alison Saar's Mirror, Mirror and the Black Lives Matter Artist Grant Exhibition. Both are powerful — artistically, emotionally, historically — and I can speak about them as an art teacher, artist or arts writer.

For example, who is Alison Saar? The teacher in me knows context is important.

Saar is a nationally known artist whose nearly life-size prints and mixed-media sculptures in Mirror, Mirror explore recurring themes: history, race, gender, identity, mythologies. The pieces are extraordinarily beautiful, even as they deal with ugly things.

Cotton Eater connects Greek mythology of the lotus eaters to how generation-upon-generations of Black Americans have been "fed" false promises. White Guise Print paradoxically references Uncle Tom's Cabin, which helped sway public opinion against slavery, but also the cotton industry, and by extension White American prosperity at the expense of Black culture and countless Black lives.

Saar is the daughter of Betye Saar, one of the first Black female artists to gain national visibility in the 1970s. The elder Saar's work opened my eyes to how art education in western civilization has been historically focused on male artists, specifically White men.

That's changing, albeit slowly, as traditional power structures are challenged, abandoned and reformed. Some bemoan that as rewriting history. To me it's reframing history, adding contextual footnotes like: The work of White male artists comprises most of art history's canon in western civilization because few women and even fewer people of color were allowed to make and exhibit work.

It's also important that, moving forward, all narratives are included, key among them the panoply of Black experiences, unfiltered, which the BLM exhibition illustrates.

There is beauty in Myron Curry's glowing, backlit painting of Amanda Gorman, the second Black woman and the youngest poet ever to read at a U.S. presidential inauguration (and who nonetheless reported that a security guard followed her home one day, telling her she looked "suspicious").

There is fear and loss, such as Jackie Schaubel's mixed-media painting honoring Trayvon Martin (shot because a neighborhood watchperson allegedly mistook the boy's candy for a gun). You can sense a mother's anguish in Jasmin Iona Brown's photographs of her son (in light of the statistics that show a Black boy is six times more likely to be shot by law enforcement than a White boy).

There is horror in Rene Westbrook's 16-panel painting of lynchings, shootings, the Klan and other brutalities. The figures are rendered in black against a white background with bits of red: blood spatter, the American flag, the Confederate flag. Although inspired by George Floyd's 2020 death at the hands of a White police officer, the threat of White supremacy is more pervasive (like when hordes of mostly White, automatic weapon-toting "very fine people" showed up at BLM events last year — supposedly to help maintain peace).

Alongside horror, there is also hope. Lady Liberty by Tracy Poindexter-Canton shows a Black woman wearing a T-shirt reading "Black Queen," her arm draped around the Statue of Liberty. Together they arise from a fiery sea. As your eye travels upward, you notice Liberty's torch bursts beyond the picture frame and turns into butterflies.

The two exhibitions remind us it's a messy business, this democracy of ours, whose epic story is still being written and whose power comes from the people. All the people. ♦