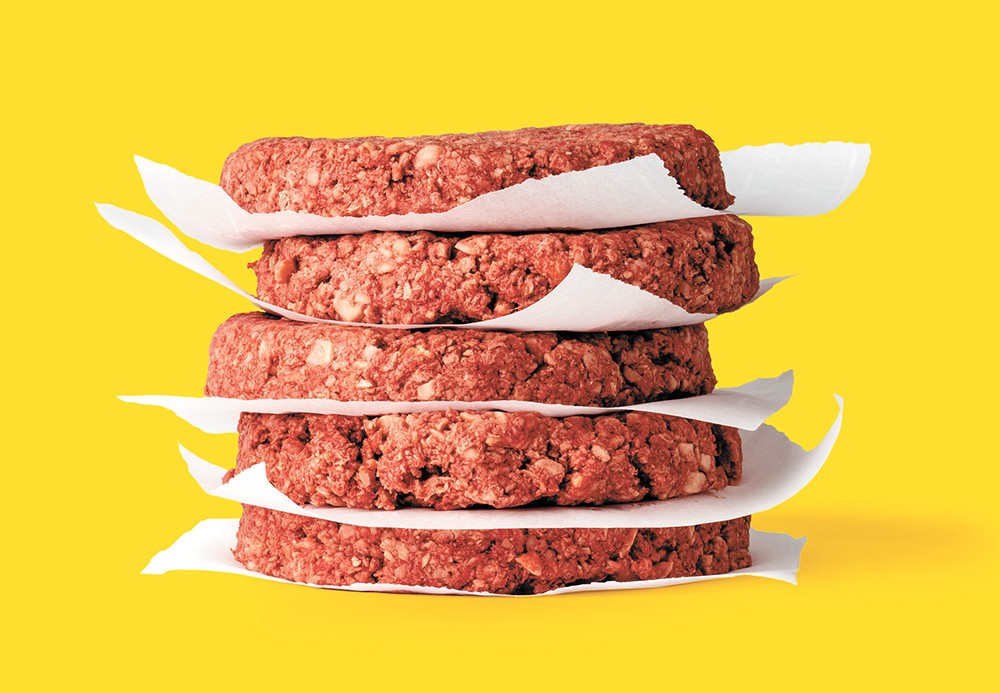 The Impossible Burger is made from plants, but tastes like beef.

food scientists have finally mastered the art of the meat-like, all-plant patty. Leading the charge — and the buzz — is the Silicon Valley-developed IMPOSSIBLE BURGER, an all-natural patty made from wheat, potatoes, coconut oil and heme, an iron-based compound abundant in red meats. The heme helps the product sizzle, "bleed" and purportedly smell as close to beef as a lab-made burger can get, sans steer. Acclaimed chefs and food critics both are in awe of the Impossible Burger; some even saying it's difficult to distinguish its traits from actual ground beef.

In the past year and a half, the Impossible Burger has gradually expanded its reach across the U.S., though it's only served in select restaurants. Until very recently, the nearest you could find it was in Seattle and Portland, but one Spokane spot (so far) is offering the Impossible on its menu: CASCADIA PUBLIC HOUSE. There, the plant patty is topped with butter lettuce, tomato, red onion, house fry sauce and the option of cheese, albeit for a bit steeper a price ($16, comes with a side) than its all-beef competitors because of the product's higher wholesale price.

"We have a lot of vegans and vegetarians coming in who are excited about it, but there's even a level of intrigue from non-vegans who've wanted to try it and see if they could tell the difference," says Cascadia co-owner Jordan Smith.

It's even duped practicing vegans who thought the kitchen accidentally made them beef, he adds.

Inlander hot take: I, too, was stunned at how eerily close to the texture, flavor and look of ground beef the Impossible Burger truly is. If you put one side-by-side with, say, a standard drive-thru hamburger, I truly believe many tasters would be hard-pressed to determine a difference.

Another meat-like burger currently being served

on at least one other local menu (it's also found at some area grocers, in the meat aisle) is the BEYOND BURGER. It's slightly less meaty-tasting than its aforementioned competitor, but still stands out from other faux meats on the market, and is thus worth trying.

Made by Beyond Meat from pea protein isolate, canola and coconut oils and beets, the Beyond Burger is also soy- and gluten-free. Now that it's being distributed locally by food services company Sysco, area restaurants can offer their own creative takes on the innovative beef-subbing patty. THE LANTERN TAP HOUSE in the South Perry District is the first known restaurant to do so, offering the Beyond Burger as its January burger special ($14, with a side), and potentially as a menu mainstay if it sells well, says Lantern kitchen manager Alexandria Fisher. She and her team are topping the Beyond with an ale mustard, arugula, red onions, smashed garlic and a Sriracha drizzle.

"It's a really good option for people who used to eat meat, or just don't like meat and want to have a burger," Fisher says. "We think it tastes great and want people to come try it even if they aren't vegetarian and they do like hamburgers."

Inlander hot take: While I personally prefer the Impossible over the Beyond as a beef burger replacement, I've also made this one at home and think the Lantern's prep is far better. (The spicy arugula and mustard perfectly complement the savory and slightly sweet patty.) The Beyond Burger's texture and flavor, however, still far outpace other mainstream veggie burger brands' products, like Boca and Morning Star. ♦

The original print version of this article was headlined "Beyond Impossible"

Latest in The Burger Issue