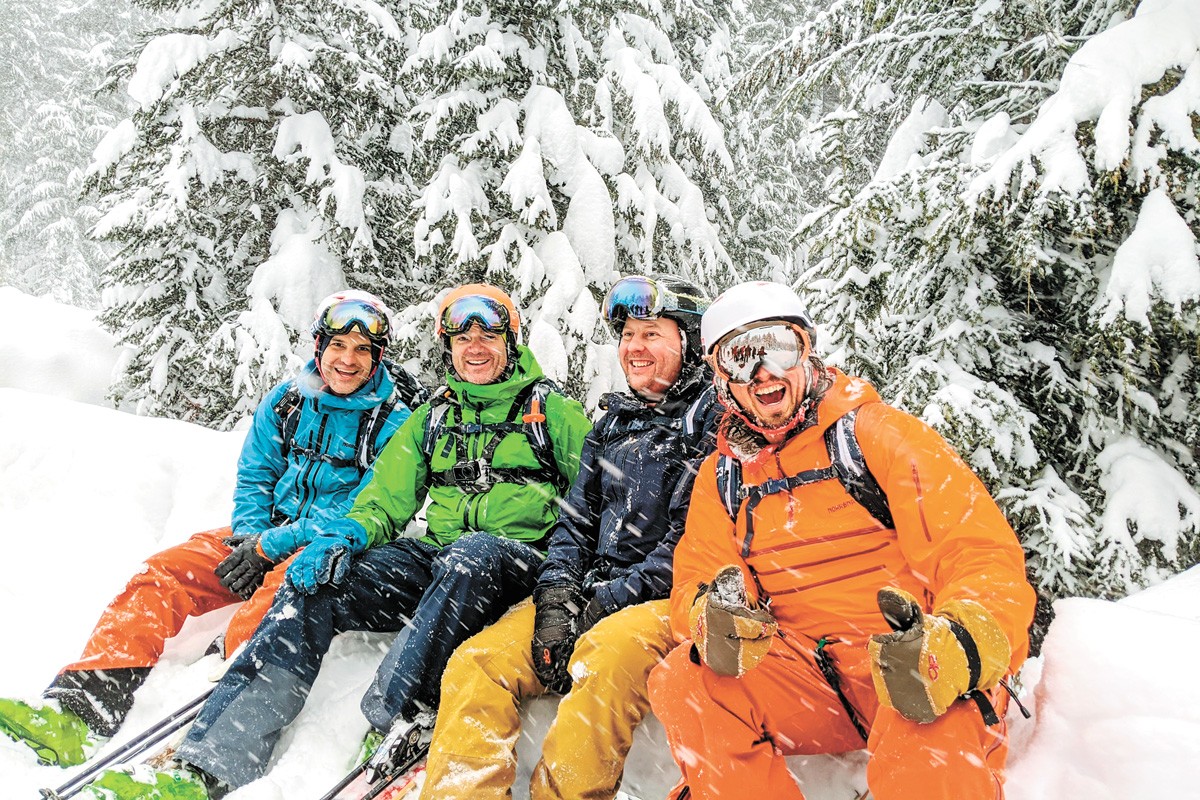 "It's a bit like hunting for unicorns or something like it. I literally take thousands of shots and there's only going to be a handful that really spark and say... 'This is what it means to be powder skiing.'"

Those are the words of professional ski action photographer Geoff Holman talking about getting that trophy shot. I was able to spend a few days watching Geoff work his photo magic on a catskiing trip to Keefer Lake Lodge last January.

Geoff and his brother, John, grew up skiing at Big White Ski Resort just outside Kelowna, British Columbia. Through skiing, they met a couple of other die-hard skiers, Todd Avison and Adam Benson, who had the same passion for skiing as they did. For many years this group of four could be found ripping up the runs and backcountry around Big White. Their backgrounds and passion for skiing inspired them to start a side business, Catskiing Canada, which caters to the marketing and promotion of catskiing in Canada.

Todd's background is in marketing and web development; now mix in Geoff's profession of photography, and you have a recipe for creating web content, branding and marketing assets for ski-related clientele. Together this group of four creates and captures some mind-blowing ski imagery that is highly utilized and recognized in the snowsports world via websites, print and social media platforms.

"It's pretty cool because Catskiing Canada kind of ties in really well with what we do. This is 100 percent a dream job for me," Todd says with a big smile.

"We work with a number of catskiing operations, and it's always interesting. Everyone has a different vision for what their business is, but I think that's one of the things we've really done really well with is really understanding the business and understanding the clients that are coming to ski," he continues. "These operations, their clientele aren't typically hucking backflips off big cliffs. They're more interested in a really awesome powder turn, so that's what we try to focus on. We try to show what inspires clients to come to these operations." 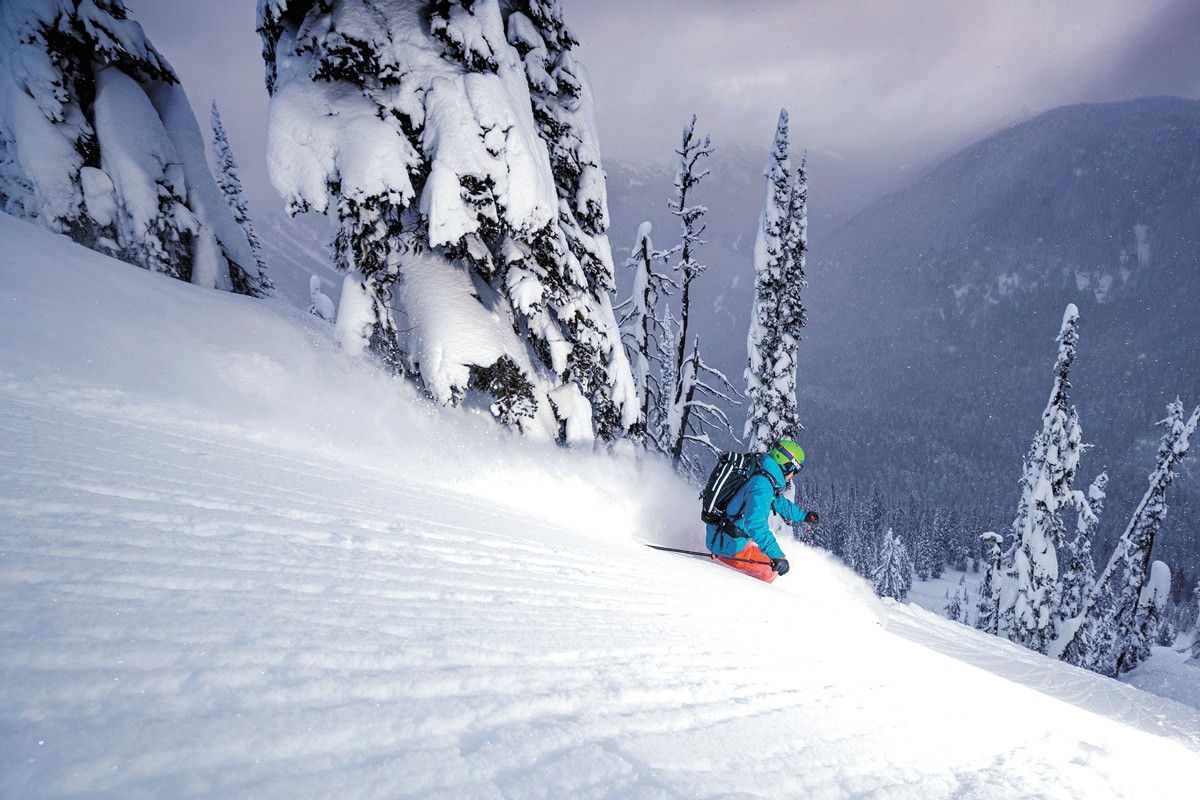 This group of four can be found throughout the winter capturing fractions of a second on snow-covered mountains. Geoff and the crew have perfected the use of a strobe light, which can turn a dark and dreary day into something spectacular. Personally, I think this is Geoff's signature as I have seen lots of these shots but Geoff's always draw me in closer.

Geoff shoots the pictures, but they all work as a team perfecting this recipe to capture these moments. Geoff's younger brother John says, "One of our special things, we bring our own light to the mountain, and we work together to get multiple light sources on a single subject. We light it from behind; we light it from the side. We all take turns holding lights and being the model."

Geoff has been recognized internationally for his skill, as hundreds of his images have been featured in brochures, billboards, websites and magazines around the world, and he's even nailed down every photographer's dream: a few magazine cover shots as well.

Geoff humbly says, "A lot of my stuff does end up in magazines, and I've been fortunate enough to get a couple of covers. I've had cover shots on Ski Canada numerous times, SKI magazine in the States, Snow Magazine in the UK a couple of times as well."

With this type of exposure, it's no wonder catskiing operations and ski resorts like working with this crew. They know they're going to get a big bang for their buck and a solid return on their investment.

Geoff's backpack and his front load pack are filled with an avalanche airbag and safety gear, several lenses, and a couple of camera bodies. Nowadays Geoff hardly even notices the 25-35 pounds of gear strapped to his body. He says jokingly, "It feels weird when I'm not skiing with it."

With a camera that can shoot 14 frames a second, it's pretty easy for Geoff to fill up a few memory cards. "If it's sunny, I'll easily shoot over 2,000 images," Geoff says. "It's a lot of frames, and a lot of them are not spectacular, but it's a bit of the editing skill and choosing which ones are going to be the special ones."

Sliding around with camera gear and lights in deep snow on brutal cold days seems like a lot of hard work, but it is what this team lives for.

Adam Benson, who is a full-time firefighter in Kelowna, had this to say: "One of my favorite things about what we get to do with the catskiing and stuff like that: I get to ski with my best friends in some incredible terrain. We get to do these trips of a lifetime and get to make all these fun photos. It's just a dream come true every time I go out there with my friends."

I ask Geoff what's the best part of his job.

"I think it's getting out with my friends, the camaraderie, and I like the stoke," he says.

"So we've kind of found our way, our kind of niche if you will, in the ski industry," adds Todd, or as I call him, "Cover Boy." Todd has been featured on over 10 skiing magazine covers around the world.

"I've been on a few covers, which is, um, pretty good for the ego," he says jokingly. "Now my wife, she's like, 'Yeah, yeah, yeah, another cover.' Um, but I still get pretty stoked about it."

For this tight group of buddies, it's really about being able to do something that they love to do and being able to do it with your friends. I ask John if there's ever any friendly rivalry between them on the hill.

Laughing, John says, "Absolutely. I mean, it's a bit of a competition among the guys. We all do our best to get the best shot of the trip. It's rewarding."

How many covers have you been on?